The cease-fire between Israel and Palestinian factions in the Gaza Strip entered into force at 2 a.m. May 21, ending a round of fighting that lasted 11 days, claimed the lives of more than 240 people and destroyed many properties. 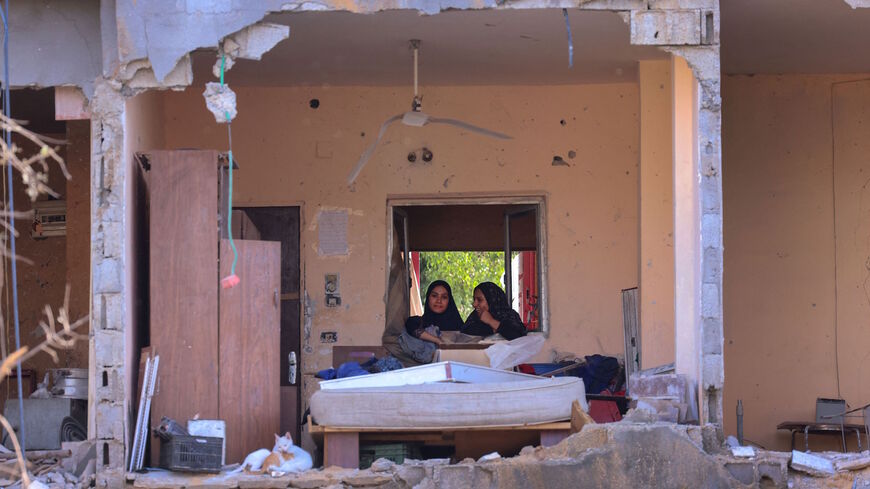 Palestinian women sit in the rubble of a building destroyed by Israeli strikes in Beit Hanoun in the northern Gaza Strip on May 21, 2021. - EMMANUEL DUNAND/AFP via Getty Images

The agreement was reached unconditionally and simultaneously through Egyptian mediation and following pressure from the United States. The Israeli government and the Palestinian factions said they would abide by it; Egypt said in a May 20 statement that it would send two security delegations to the Gaza Strip and Tel Aviv in the coming hours to see to the implementation of the agreement.

Before the truce, the two sides had been launching projectiles at one another until the last minute. Abu Obeida, the military spokesperson for  Izz ad-Din al-Qassam Brigades, the armed wing of Hamas, said in a televised speech, “We had prepared a rocket strike over the whole of Palestine, from Haifa to Rammun [in the West Bank]. But, we responded to the Arab mediation for a cease-fire, and we will observe the behavior of the enemy as of 2 a.m. May 21. … Our rocket strike will depend on the enemy’s compliance with the cease-fire agreement.”

In the wake of Israeli attempts to evict Palestinian families from their houses in Sheikh al-Jarrah in East Jerusalem and the Israeli police raid into Al-Aqsa Mosque during Ramadan, the leader of Hamas’ armed wing, Mohammed al-Deif, threatened a military confrontation if Israel did not put a halt to such measures. A few days later, Hamas launched its rockets toward Jerusalem on May 10.

Israel responded to Hamas’ rockets by launching a military campaign dubbed Operation Guardian of the Walls on the Gaza Strip, while armed Palestinian factions called theirs Sword of Jerusalem. During the operation, Israeli aircraft and artillery destroyed 1,800 housing units in the Gaza Strip, in addition to dozens of facilities and factories. Hamas and other factions launched more than 4,300 rockets at Israel, some of which damaged the buildings in its center and south.

The Israeli army said it destroyed hundreds of miles of Hamas underground tunnels in an operation dubbed Hamas Metro and struck other military infrastructure, setting it back years. The army also destroyed the homes of Hamas leaders.

The head of Hamas' political bureau, Ismail Haniyeh, in a televised speech May 21, called the cease-fire "the great victory of the resistance," stressing that the armed wing of his movement and the armed Palestinian factions had dealt a severe blow that will leave its painful effects on Israel and its future.

Senior Hamas leader Osama Hamdan confirmed in an interview with Al-Monitor that the cease-fire agreement was the result of Arab efforts, primarily from Egypt. He said the agreement was reached simultaneously rather than unilaterally, contrary to Israel’s claims.

Hamdan said Hamas has obtained guarantees from Egypt and other Arab countries that Israel will halt incursions into Al-Aqsa Mosque and that the people of the Sheikh al-Jarrah neighborhood will not be expelled from their homes. Egypt will follow up on the implementation of that agreement through the visits of the security delegations that arrived in Gaza and Tel Aviv on May 21. A delegation held talks with the Hamas leadership for three hours, before leaving for Tel Aviv, carrying with them the demands outlined by Hamas and the factions.

The Al-Aqsa Mosque compound on May 21 witnessed clashes between Israeli police, who re-stormed mosque grounds, and young Palestinians after they organized a demonstration in which they chanted solidarity with the resistance in Gaza and with Deif. Rocks were thrown at the police.

Hamdan said Hamas and the other Palestinian factions are monitoring the extent of Israel’s abidance by the agreement, stressing that they will not hesitate to respond to any Israeli violation, specifically with regard to the issue of Sheikh Jarrah and storming the Al-Aqsa Mosque.

Palestinians in the Gaza Strip and the West Bank spontaneously celebrated the cease-fire and what they called a “victory” over Israel in the streets of the cities. They distributed sweets and set off fireworks.

An Egyptian member of parliament told Al-Monitor on condition of anonymity that Egypt and the administration of US President Joe Biden exerted huge pressure on both sides for de-escalation ahead of the cease-fire agreement announced on the evening of May 20.

He said the intransigence of both Hamas and Israel delayed the announcement of the cease-fire for 24 hours, as it was supposed to be announced on the evening of May 19. He said the agreement is tenuous and needs to be monitored and entrenched by the Egyptian intelligence service.

Biden said May 20 that Egypt and other countries had made remarkable efforts in putting together the cease-fire agreement. He promised to help Israel resupply the Iron Dome system that intercepts missiles fired from the Gaza Strip.

Palestinians woke up on the morning of May 21 in the Gaza Strip and inspected the extent of destruction that befell homes, other structures and infrastructure while civil defense teams resumed searches for some of the missing under the rubble. The civil defense forces and volunteer groups also began removing rubble.

Political analyst and former editor-in-chief of Felesteen newspaper Mustafa Al-Sawaf told Al-Monitor that the cease-fire is still fragile. He said the Palestinian factions, particularly Hamas, have the means to bind Israel to the agreement through their military strength.

He said Hamas accomplished a lot during this military round, mainly by stirring the streets in the West Bank and inside Israel in a popular uprising against Israeli soldiers and police. It also created a state of regional and international sympathy, not to mention its military achievements in its continued massive firing of rockets toward Israel.

Ibrahim Al-Madhoun, a political analyst close to Hamas and the head of the Youth Media Center, told Al-Monitor that Israel has no choice but to abide by the agreement in light of international pressure to stop the destruction and killing of civilians in the Gaza Strip. He also said that the objectives of the Israeli army in the Gaza Strip have been exhausted.

He said Hamas and the factions only used a fraction of their military strength during the round of military escalation. They achieved objectives they were after and appeared as the leaders of the Palestinian national project — supplanting the Palestinian Authority — by defending the Al-Aqsa Mosque and Jerusalem against Israeli attacks.

Both parties have so far abided by the cease-fire agreement in terms of airstrikes and rocket fire, and Palestinians in the Gaza Strip were gradually starting to return to normal life.