“If Hamas thinks we will tolerate a drizzle of rockets, it is wrong,” Israeli Prime Minister Benjamin Netanyahu said after the cease-fire took effect. 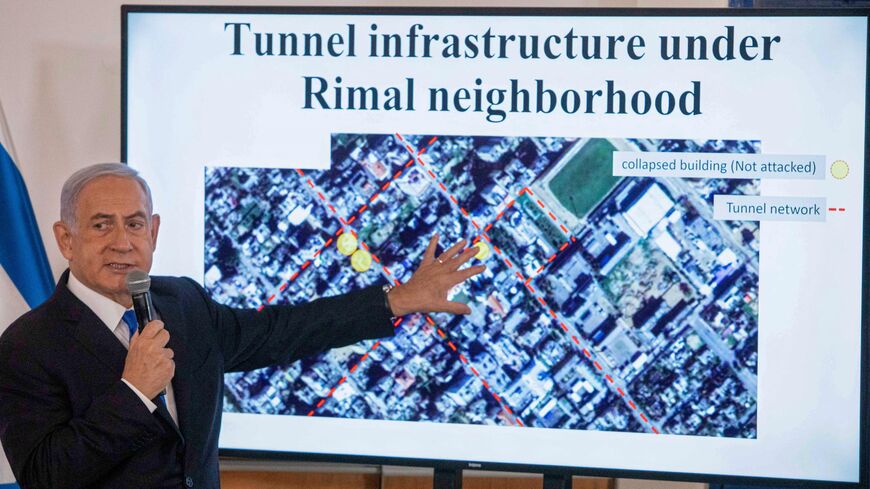 Israeli Prime Minister Benjamin Netanyahu gestures as he goes through a slideshow during a briefing to ambassadors to Israel at the Hakirya military base in Tel Aviv, Israel, on May 19, 2021. - SEBASTIAN SCHEINER/POOL/AFP via Getty Images

Prime Minister Benjamin Netanyahu pledged Friday that Israel would respond with “a new level of force" to future rocket attacks from the Palestinian militant group Hamas.

“If Hamas thinks we will tolerate a drizzle of rockets, it is wrong,” Netanyahu said during a press conference with top defense officials in Tel Aviv.

“We will respond with a whole new level of force to every instance of aggression against the Gaza-envelope communities or anywhere else in Israel,” he warned.

More than 250 people died in the 11-day conflict between Hamas and Israel, most of them Palestinians. Hundreds of homes and other buildings were destroyed by Israeli strikes in the Hamas-run Gaza Strip, according to the United Nations. World leaders, including President Joe Biden, have pledged to help rebuild the impoverished Palestinian enclave.

“We will do this in full partnership with the Palestinian Authority — not Hamas, the Authority — in a manner that does not permit Hamas to restock its arsenal,” Biden said in a White House address Thursday.

Speaking hours after the Egyptian-brokered, US-backed cease-fire took effect Friday, Netanyahu claimed victory in the bloodiest conflict the region has witnessed since the 50-day war in 2014, which left more than 2,200 people dead — a majority of them Palestinians.

Israel says more than 4,300 rockets were fired by Hamas and the Islamic Jihad group during the week and a half of hostilities, most of them intercepted by the Iron Dome missile defense system.

Netanyahu said the Israeli offensive in Gaza killed more than 200 militants, 25 of them senior commanders. Hamas and the Islamic Jihad say 20 fighters died in the strikes.

The army also says it struck more than 60 miles of Hamas’ extensive tunnel network. In an interview with Al-Monitor, a Hamas official downplayed the damage to its underground system.

Netanyahu described Israel’s bombing campaign in the Gaza Strip as a blow to Hamas’ capabilities. He warned that “the reality on the ground will determine the future of the campaign.”

The cease-fire halted the heavy bombardments of Gaza and has kept rockets from raining down on Israel, but failed to resolve long-standing grievances. Early Friday, Israeli police fired stun grenades and rubber bullets at Palestinians outside of the Al-Aqsa Mosque compound in Jerusalem who were protesting in solidarity with Gaza and families facing eviction in East Jerusalem's Sheikh al-Jarrah neighborhood.