Egyptian and Palestinian Authority leaders are back at center stage of US regional diplomacy. 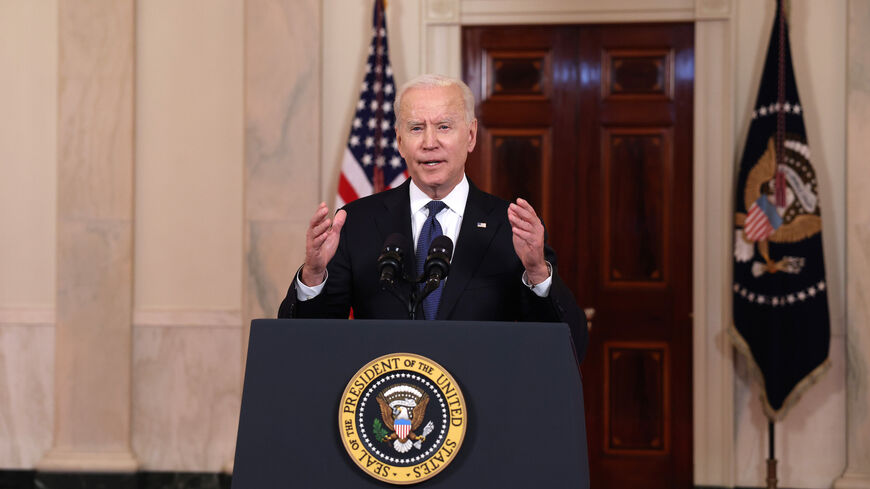 US President Joe Biden delivers remarks on the conflict in the Middle East from the White House on May 20, 2021, in Washington. - Anna Moneymaker/Getty Images

Israel-Palestine a US priority again

US President Joe Biden’s May 20 announcement of a cease-fire between Israel and Hamas appears the start of a deeper US engagement in the Middle East.

Washington was pulled back in by a conflict that it did not anticipate, amid other foreign-policy and domestic priorities.

But it was unavoidable. Hamas and the Islamic Jihad fired more than 4,300 rockets from Gaza into Israel, killing 12 people, including two children. In Gaza, 243 people were killed, including 66 children, health officials in Gaza said; as many as 72,000 were displaced. In addition, the Israeli strikes caused severe damage to Gaza’s already inadequate health, education and public works infrastructure.

Prior to May 10, when the latest escalation flared, the Israeli-Palestinian issue wasn’t a top Biden administration priority. Biden had announced special envoys for Yemen, Iran, Libya and even the Horn of Africa. The most senior official working every day on Israeli-Palestinian affairs was Deputy Assistant Secretary of State Hady Amr. Barbara Leaf, the administration’s nominee for assistant secretary of state for Near Eastern affairs, does not yet have a confirmation hearing scheduled.

But along with Friday’s cease-fire will come a renewed focus on what has historically been considered the central regional conflict. It turns out the Arab world, which last year made several big moves to recognize Israel diplomatically, still cares about the Palestinian issue, especially when it comes to Jerusalem and children being killed, as Daoud Kuttab explains. And a new wave of progressive Democrats care, too, as Jared Szuba reports, putting further pressure on the administration.

US Secretary of State Antony Blinken is en route to the region. According to The New York Times, the reset includes the United States taking a leading role in the reconstruction of Gaza, building on the Abraham Accords negotiated during the Trump administration, and even having another look at Israeli settlement activity in the West Bank and Jerusalem.

Netanyahu can’t win — or did he?

We wrote here last week that the war gave Israeli Prime Minister Benjamin Netanyahu a political lifeline, as one of the consequences of the related violence between Arabs and Jews in Israeli mixed cities was Yamina party chair Naftali Bennett backing out of his agreement with Yesh Atid party chair Yair Lapid to form a government, primarily because that alliance depended on the backing of Islamist Raam party leader Mansour Abbas.  Bennett’s right-wing coalition, already uneasy of a deal involving Abbas, drew the line after the escalation.

Lapid has two weeks to form a government. If he fails, the task turns to the Israeli parliament or Knesset. And if the Knesset can’t agree, there will be a fifth election in two years, with Netanyahu staying on as prime minister in the interim.

The assessment of the war, so far, is mixed. "The IDF executed its mission in the Gaza Strip with precision based on quality intelligence, the blows it dealt Hamas were painful and particularly harsh, but the operation was essentially a replay of previous ones," writes Ben Caspit.

But "in strategic terms, Israel sustained a significant blow," Caspit continues. "Hamas has not been vanquished, its top leadership remains alive, and the organization continued firing rockets at Israel until the very last minute. Most importantly, it positioned itself successfully as the ultimate defender of Al-Aqsa and the other Jerusalem sites holy to Islam, embarrassed Israel, disrupted the Jerusalem Day celebrations marking the city’s unification under Israeli rule, sent lawmakers fleeing for cover in the middle of a Knesset session, set fire to relations between Israel’s Arab and Jewish citizens and escalated Palestinian anti-Israel violence in the West Bank. Not a bad haul for 10 days of asymmetrical fighting."

Netanyahu’s political opponents are also piling on, calling his Gaza policy a failure. Mazal Mualem writes that Netanyahu branding himself as "Mr. Security has become a political weakness," as Hamas’ missile assault on Israeli cities, including for the first time Jerusalem and Tel Aviv, is being characterized as a sign of a failed Gaza policy.

Despite a bombing campaign against Gaza that produced an international outcry for its toll on Gaza civilians and infrastructure, Lapid slammed Bibi for not being more "fearless" in Israel’s military campaign, saying Israeli actions need to "make clear to the Gaza population that they have much to lose by enabling Hamas to continue ruling the Strip."

While Bibi’s rivals on the right, New Hope party chairman Gideon Saar and Yisrael Beitenu chairman Avigdor Liberman, have also criticized the cease-fire, it is not yet clear whether Netanyahu’s perceived weakness on Gaza will translate into a new government by his opponents, who are still divided on other issues.

In response to these charges of weakness, Netanyahu pledged May 21 that Israel would respond with “a new level of force" to future rocket attacks from Palestinian militant group Hamas.

At this point, it seems increasingly possible that Netanyahu could remain prime minister, although the politicking is far from over.

Did Mahmoud Abbas just get a lifeline?

Biden said that the United States will work with the UN and other countries to rebuild Gaza "in full partnership with the Palestinian Authority — not Hamas, the Authority — in a manner that does not permit Hamas to simply restock its military arsenal."

This is a potential windfall for Palestinian Authority President Mahmoud Abbas. Abbas had canceled long overdue elections in April over Israel allegedly not allowing Palestinians living in Jerusalem to vote (Israel has denied this), one of the catalysts for the Jerusalem demonstrations. Despite a call or two with Biden, Abbas otherwise seemed a bystander to events of the past 11 days, having little or no influence with Hamas, the demonstrators in Jerusalem or the Israeli Arabs rioting in mixed cities. Abbas did not seem to be much involved, if at all, in the peacemaking with Egypt (see below).

Hamas leaders even rejected Abbas’ call for a national unity government, perhaps sensing his weakness as a bystander in the latest events, as Adnan Abu Amer reports.

Now Biden has made clear that reconstruction and development will flow through the Palestinian Authority. Left unanswered is how such a program might be implemented without engaging Hamas, which rules Gaza and which the United States and Israel considers a terrorist organization.

Prior to the events this month, Egyptian President Abdel Fattah al-Sisi seemed to be on Biden’s "do not call" list, a sign of the administration’s seeking distance with regional autocrats with human rights issues, such as Turkish President Recep Tayyip Erdogan and Saudi Arabian Crown Prince Mohammed bin Salman.

So much for that. Biden’s first outreach to Sisi revealed again the essential role that Egypt plays in Israeli-Palestinian and regional diplomacy. Biden expressed his "sincere gratitude" to Sisi and Egyptian diplomats who Biden said "played a critical role in this diplomacy."

Shahira Amin documents shifts in the approach of Egypt to the Palestinian issue, seizing opportunity in the current crisis. As one of the few countries that maintains relations with Hamas and Israel, Egypt has committed to monitoring the agreement and providing $500 million in assistance to Gaza, as Ahmad Abu Amer reports from Gaza.

"One of the casualties of the latest round of Israeli-Hamas fighting is Turkey's apparent irrelevance as a regional power in terms of the strategic ramifications of the fighting," writes Cengiz Candar.

"After years-long power projection in a bid to be perceived as an emergent revisionist power in the Middle East and international arena, Erdogan's strong pro-Hamas stand has proved to be ineffective both in the military and the peace-making fields."

And Iran may be another loser. With attention now being shifted to US-led diplomatic and reconstruction efforts involving Egypt and other Arab states, Iran looks to be at least temporarily sidelined again in Gaza, despite claims in Tehran and by Hamas leaders of a so-called "great victory" achieved by the fighting and ceaseifire, as Entsar Abu Jahal and Ahmad Abu Amer report.

Can Gaza pick up the pieces?

We wrote back in December 2020 about how Gaza’s economy was in "near collapse," according to the UN and other agencies. That "grim reality" just got terribly worse.

Rasha Abou Jalal reports on the devastation to Gaza’s already dilapidated health infrastructure as a result of the bombing, including that "the only central laboratory for coronavirus tests in the coastal enclave has ceased to operate amid the Israeli shells that targeted the Health Ministry building, and Al-Ramal Clinic on al-Wehda Street in central Gaza City."

Hana Salah reports on the destruction of local businesses, such as a beloved ice cream shop and bookstore, in addition to catastrophic setbacks for agriculture and industry.