Picking up the pieces in Gaza; the uneasy, uncertain peace between Israel and Hamas; PLO and Hamas still can’t find common ground; Russia on the diplomatic sidelines; desert kingdom looks to build forest; and more! 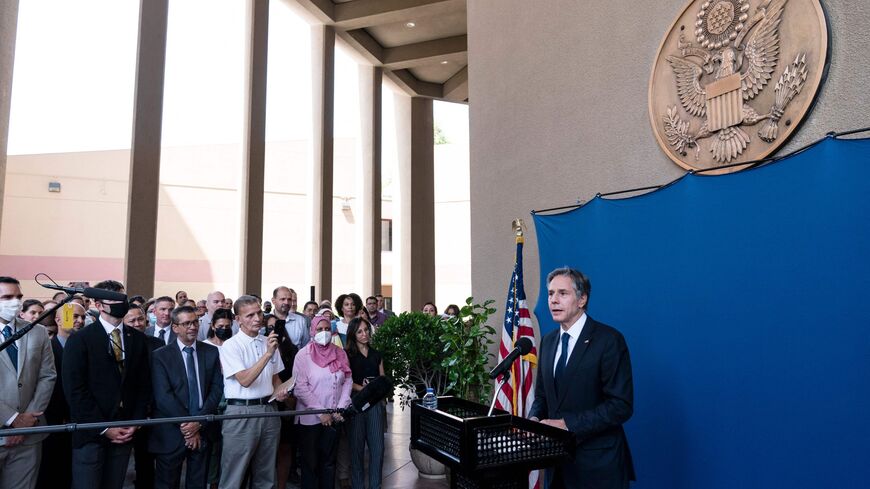 US Secretary of State Antony Blinken greets staff members of the US Embassy in the Egyptian capital, Cairo, on May 26, 2021. Blinken met with President Abdel Fattah al-Sisi in Cairo on a Mideast tour to shore up an Egypt-brokered cease-fire between Israel and Palestinian militants in Gaza. - ALEX BRANDON/POOL/AFP via Getty Images

US Secretary of State Antony Blinken met Wednesday for nearly two hours with Egyptian President Abdel Fattah al-Sisi, referring to him afterward as a “real and effective partner” in brokering a cease-fire in the Israel-Hamas Gaza war. Sisi, he said, is helping “build something positive."

Beyond Gaza: The Blinken-Sisi conversation went well beyond the Gaza cease-fire:

-They also discussed the so-far stalled diplomacy over the Grand Ethiopian Renaissance Dam. Ethiopia is committed to the second filling of the dam, which Egypt claims will disrupt the flow of its water from the Nile. The potential crisis involves three key US partners — Egypt, Ethiopia and Sudan. Ayah Aman has the latest on the Nile dam crisis here.

-Blinken praised Egyptian "leadership" in backing the UN political process leading to Libyan elections in December and said foreign forces (read Turkish and Russian irregulars and proxies) must leave Libya. Toward that end, Cairo has sought to reconnect with Ankara, as Hagar Hosny and Fehim Tastekin report, although a rapprochement is a work in progress, given the differences over Libya and of course the Muslim Brotherhood,.

Underscoring human rights: Blinken said that he "underscored the importance that President [Joe] Biden places on human rights" in his meeting with Sisi, and that human rights will be part of an ongoing "constructive dialogue" with Egypt, as Elizabeth Hagedorn explains.

Our take: So much for Sisi, once maligned as US President Donald Trump’s "favorite dictator," being on Biden’s "do not call" list. When the Israel-Hamas war escalated, the call was inevitable and urgent; the ice was broken, as Muhammed Magdy reports. Palestinian President Mahmoud Abbas also got on Biden’s call list, and a meeting with a Blinken this week, but only because the United States can’t call or deal directly with Hamas, which it has designated a terrorist group. While Abbas is getting a lifeline from the US decision to work through Abbas and the Palestinian Authority, dealing with Sisi is no act of US diplomatic charity — it’s essential, not only for diplomacy and conflict resolution between Israeli and Palestinians, but also in keeping Libya on its fragile path to elections and in helping assure that the Nile dam crisis reaches a diplomatic settlement.

As Israel celebrates the operational success of its conflict with Hamas, the countdown to the next stage of conflict may have already begun. The Israeli Defense Forces have warned the Gaza-based militant group will pay a price should it launch so much as “a drizzle of rockets” toward Israel.

But as Ben Caspit writes, Israelis are in no mood for another round of fighting with Hamas. “The exhaustion on both sides will generate another period of calm with occasional bloody skirmishes along the border,” Caspit says. “The past is destined to repeat itself.”

Just before the latest flare-up of violence, Hamas and the PLO were discussing how to form a national unity government. But after its 11-day battle with Israel, "Hamas is now in a victory mode, and whatever they might have been willing to accept before is probably off the table now,” Daoud Kuttab reports.

Hamas’ desire for legitimacy on the world stages could open the door for cooperation with the PLO, which is based in Ramallah. For now, Hamas is ignoring Abbas' call for unity, as Adnan Abu Amer writes.

Plus, Entsar Abu Jahal examines the Gaza-based group’s ties with Iran. Hamas denies Tehran was calling the shots in its latest operation, despite reportedly naming one of its rockets after slain Iranian general, Qasem Soleimani.

3. Picking up the pieces in Gaza

With the cease-fire holding, attention has turned to rebuilding the Gaza Strip, where survivors are still reeling from Israel’s relentless bombing of Hamas targets in densely populated neighborhoods.

Mervat Ouf speaks with Palestinians who spent hours trapped underneath the rubble of their homes. Israeli airstrikes wreaked havoc on the Palestinian enclave’s health infrastructure, as Rasha Abou Jalal reports, and Hanady Salah covers the damage dealt to Gaza’s art and cultural centers.

Regional aspirations and diasporic links to Israel help explain Russia’s recent efforts to de-escalate the Israel and Hamas fighting, which included consultations with the warring parties, regional partners and US Secretary of State Antony Blinken. “Russia’s response to the recent events in Gaza reflects its desire to expand its diplomatic role in the Israeli-Palestinian peace process” and the Middle East more broadly, Samuel Ramani writes. Moscow has offered to host Israeli-Palestinian peace talks, but officials on either side are skeptical of Russia’s ambitions.

Sebastian Castelier takes a look at one of Saudi Arabia’s latest megaprojects: planting 10 billion trees across the kingdom over the coming decades. Crown Prince Mohammed bin Salman aims to increase by twelvefold the country’s land area covered by forest, but his plan is so far short on specifics. Questions remain over the feasibility of planting billions of trees in a country that records the third-lowest precipitation worldwide.

ICYMI: Israel-Hamas war, by the numbers

Check out this breakdown of the destruction caused by the 11-day conflict between Israel and Hamas, which damaged 17 hospitals and clinics and 53 schools in the Gaza Strip, displaced tens of thousands of Palestinians and caused millions in lost revenue to Israeli businesses.

A recent UN Security Council report documents “widespread and systematic” recruitment of children in Syria between 2018 and 2020. Children were used in combat by terrorist group Hayat Tahrir al-Sham, Turkey-backed rebel groups and elements of the US-backed, Kurdish-led Syrian Democratic Forces. The report also takes a look at child casualties, sexual violence against Yazidis and attacks on schools.

What we’re listening to: A "transformation" in US attitudes on Israel?

What explains shifting Democratic opinions on the Israeli-Palestinian conflict? Shibley Telhami, a polling expert and the Anwar Sadat professor for peace and development at the University of Maryland, says the recent focus on racial justice and civil rights in the United States is a driving factor. Listen to Telhami’s full interview with Andrew Parasiliti here.

Be sure to check out Ben Caspit’s podcast with Orit Perlov, who monitors social media trends in the Arab world. Perlov says Hamas’ escalation with Israel caught Gazan citizens by complete surprise. "The writing was not on the wall,” Perlov said. “It was a huge shock.”