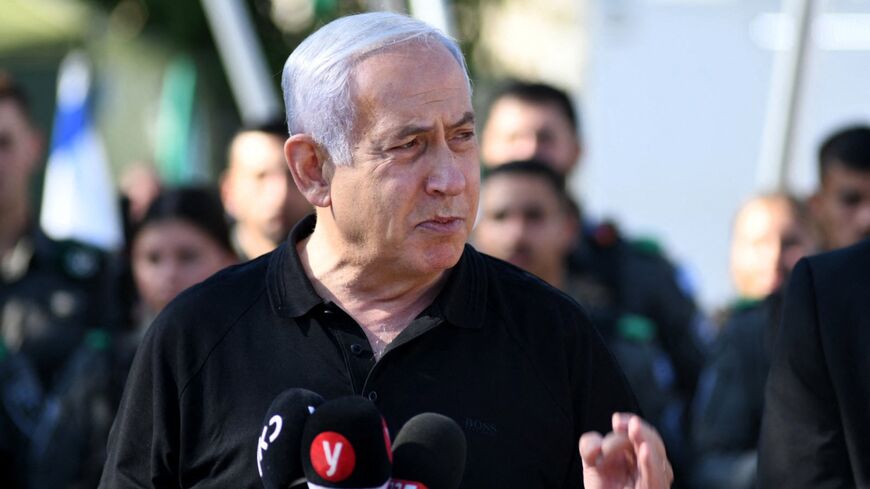 Israeli Prime Minister Benjamin Netanyahu speaks during a meeting with Israeli border police in the central city of Lod, near Tel Aviv, on May 13, 2021, a day after Israeli far-right groups clashed with security forces and Arab Israelis. A state of emergency has been declared with entry restrictions and a curfew in the mixed Jewish-Arab city of Lod, where an Arab resident was shot dead and a synagogue torched. - YUVAL CHEN/POOL/AFP via Getty Images

Israel’s war on Hamas has given new life to Benjamin Netanyahu’s efforts to hold onto power as prime minister.

It wasn’t looking good for Netanyahu before the conflict escalated, with two minority parties having agreed to form a coalition to oust Bibi. But on May 13, Yamina party Chair Naftali Bennett, who had a nearly done deal with Yesh Atid party Chair Yair Lapid, told Lapid the deal was off.

The collapse of the prospect for a so-called "government of change," based on nothing more than a shared desire to defeat Bibi, "is the direct outcome of violent clashes in mixed Jewish-Arab towns this week," writes Mazal Mualem.

Lapid still has until June 2 to form a government before the process is turned over to the Knesset (parliament). If the parliament can’t decide, there will be a fifth election, which would take months — and Bibi would remain prime minister in the interim.

Bennett’s right-wing supporters had misgivings about an alliance with Lapid, even before the Gaza escalation, and especially because the alliance depended on the backing of Islamist Raam party leader Mansour Abbas. Abbas and Raam are presumed by many to be ideological distant cousins of Hamas and the Muslim Brotherhood. After the recent violence, Bennett drew the line at a deal with Lapid for a government backed by Abbas.

Lapid’s prospects seem increasingly dim after Bennett’s call, but it’s not over. New Hope Party Chair Gideon Saar and Israel Our Home Party (Yisrael Beitenu) Chair Avigdor Liberman are still in the mix. Both are cagey political players and former Likud members and Bibi allies, who could decide to flip the balance by joining with Lapid, and perhaps freezing out both Netanyahu and Abbas.

But the political machinations are in some way a distraction to the fault line between Arab and Jewish Israelis that was revealed this week.

"The flare-up with Gaza was just a trailer for the real drama that unfolded within Israel," adds Mualem, "with young Arab Israelis, likely incited by Hamas, turning on their Jewish neighbors in two towns that had been symbols of coexistence — Lod and Acre."

"What stood out throughout these outbreaks of violence was the country’s deeply flawed governance as reflected in its prolonged political crisis," continues Mualem. "Not only did the leadership appear helpless, the police seemed unable to control the spread of unrest, prompting some Jews to feel compelled to defend themselves."

The unacceptable toll of the bloodletting between Israel and Hamas will, at some point, reach an end. But this Arab-Jewish violence is, really, to apply an overused and misused expression, an existential challenge to Israel. Nobody expected such an explosive reaction from Israel’s Arab citizens to the events in Jerusalem and Gaza.

Arab citizens of Israel make up 20% of Israel’s population. Prior to recent events, Abbas was a potential kingmaker and bridge builder, a sign of a possible new normal in Israeli politics. His campaign was about local politics, not ideology or identity. Abbas has said he will be ready to resume talks about the next government after violence dies down.

But Abbas needs to read the street. He could be one who helps rebuild the burned bridges between Arabs and Jews. Or he could be sidelined in the next government formation, with his people seeing him as the one who sought a naive and elusive compromise. That chapter has yet to be written. Afif Abu Much, more than any other writer, chronicles the rapidly evolving trends among Arab Israelis.

While Netanyahu and other right-wing politicians may be inclined to toss Abbas aside, given the political currents, Ben Caspit writes that "the real remedy" to endless strife is "Arab participation in the country’s governance and decision-making."

The rise of the regionals?

As in every Israeli-Palestinian conflict over the years, the United States quickly moved to quell the violence. Deputy Assistant Secretary of State Hady Amr arrived in Israel on Friday to try to broker some form of cease-fire. Netanyahu moved to gain the upper hand before he landed, launching a ground-based artillery barrage to complement the air assault on Gaza, spurning Russian and Egyptian attempts to broker some type of de-escalation with Hamas, as Rina Bassist reports.

Having seemingly slayed the Lapid-Bennett coalition, and after dealing a devastating military blow to Hamas, Netanyahu may now be willing to signal a willingness to wind down the operation, which would be well received in Washington.

Amr is a veteran of Israeli-Palestinian diplomacy, as Elizabeth Hagedorn explains. While the ask and talking points are mostly clear for his meetings with Israeli officials, there is a fair question about whether he will find a viable interlocutor in Palestinian President Mahmoud Abbas (no relation to Mansour Abbas). The Palestinian Authority (PA) rules in the West Bank, but the preparations for elections, which Abbas had called for but then canceled last month, revealed his weak political hand. Abbas has little or no pull with Hamas, Palestinians living in Jerusalem or Arab citizens of Israel. There is, as Daoud Kuttab explains, a new generation of Jerusalem-centric activists beyond the control of the PA.

There is also a significant opening for regional players to step up. White House Press Spokesperson Jen Psaki said May 13 that Qatar, Egypt and Tunisia "can play an important role and have conversations with Hamas from that end." It is a no-brainer that any cease-fire will ultimately go through Egypt — given its continued role as intermediary with Hamas — and that Qatar, which provides humanitarian and economic assistance to Gaza, will also be critical to an eventual cease-fire and in dealing with the post-conflict humanitarian crisis.

There is also a role for the United Arab Emirates and the Abraham Accords, once the dust settles. Ebtesam Al-Ketbi, founder and president of the Emirates Policy Center, told Al-Monitor this week that the accords can eventually provide a mechanism for dialogue and concessions, although the tough choices will of course be up to the Israelis and Palestinians themselves. Abu Dhabi is well positioned as mediator and broker of deals, not just in the Middle East, but in the Horn of Africa, as Samuel Ramani explains.

Since its inception in 2012, Al-Monitor has had an unmatched team of Gaza columnists, often working under difficult conditions, providing readers with perspectives and sources not often found elsewhere. In case you missed any of these reports in the last 24 hours, we would encourage you to look again at our coverage:

Hana Salah on how everyday Gazans are dealing with the toll of death and destruction; Rasha Abou Jalal on Hamas scrambling for answers of how Israel was able to target and kill their military leaders; Ahmad Abu Amer and Entsar Abu Jahal on Hamas’ calls for continued resistance and revenge for those killings; and Adnan Abu Amer on Hamas’ rocket arsenal.