The Israeli prime minister and Palestinian president are both losing control of their traditional coalitions. 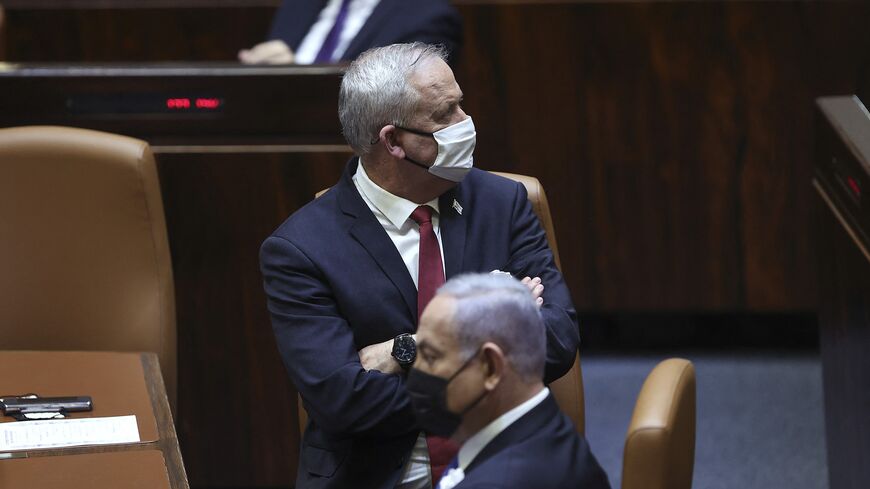 Which direction will Israel go? Israeli Prime Minister Benjamin Netanyahu (bottom) of the Likud is struggling to form a coalition government and the baton for assembling one could be passed next month to Yesh Atid's Yair Lapid. Here, Netanyahu and Defense Minister Benny Gantz (top) attend the swearing-in ceremony of Israel's Knesset in Jerusalem on April 6, 2021. - ALEX KOLOMOISKY/POOL/AFP via Getty Images

Netanyahu: close to the end?

Israeli Prime Minister Benjamin Netanyahu has less than two weeks to pull off an electoral miracle.

Ben Caspit writes, "We have never been this close to the end of the Netanyahu era" since his return to the premiership in 2009.

If so, and if Lapid’s reported deal to allow New Right party (Yamina) leader Naftali Bennett (Bibi’s former chief of staff) to serve first as rotating prime minister holds up, it’s probably game over for Israel’s longest-serving prime minister, who is also on trial for corruption.

A bitter Netanyahu said that Bennett’s position "spits in the face of democracy" and that his former chief of staff is "ready to assassinate the right."

And neither, it seems, is Mansour Abbas of the United Arab List party (or Raam party, according to its Israeli acronym).

In a sign of Netanyahu’s straits, Abbas aligned his party with Bennett and Saar in a procedural vote that allowed the anti-Bibi bloc to control the influential Knesset Arrangement Committee.

Netanyahu has sought to thread the needle by appealing for the Arab vote while keeping his hard-line right-wing faction in place.  After the vote in the parliament this week, the prospect seems even more far-fetched than ever.

It seems that the there is no winning coalition without either Raam’s four seats or the Arab Joint List’s six seats, as Afif Abu Much and Mazal Mualem explain.  Abbas, rather than his former Joint List allies, may have given himself the final say on who becomes next prime minister.

It is an open question whether Abbas and the Arab parties can come to terms with Bennett and the New Right.

"Lapid is preparing the public for a government of ideological opposites that will contain fervent right-wingers who believe in annexation of the settlements sitting next to members of far-left parties, and it will all depend on the Arab factions," writes Mazal Mualem.

"Lapid presents the idea as an ‘Israeli unity government,’ but it sounds like a marketing trick: There will be no unity," Mualem continues. "The largest party, by far, is still the Likud headed by Netanyahu. These voters, together with the ultra-Orthodox, would be left out of the game."

Meanwhile, in the adjoining Palestinian territories, elections are causing deep rifts, too. Palestinian President Mahmoud Abbas is considering postponing a series of votes (legislative on May 22; presidential on July 31; and Palestinian National Council on Aug. 31) that were originally intended to bring unity but have instead revealed deep divisions.

"Palestinians view the long-awaited elections as a legitimate right and also as the entry point to unifying the Gaza Strip and the West Bank in a single legal, administrative and local security unit," writes Daoud Kuttab.

The West Bank, administered by the Palestinian Authority, is governed by Abbas’ Fatah party; Hamas, the Islamic Resistance Movement, rules in Gaza.  The territories are separated by 58 miles, but the gap between Fatah and Hamas is far greater than that.

Despite official declarations that Palestinians are going ahead with elections, behind the scenes, Abbas and his supporters are looking for a way out.

Preparations for the first-round legislative elections have revealed that the old-school Fatah coalition is likely beyond broken.

There are now "two unofficial Fatah lists competing with the original Fatah list. While the current election scheme is based on proportional representation and therefore fewer votes will be lost due to this division, the results will definitely weaken the Abbas leadership," reports Kuttab.

And then there is the Future List (yes, both Israeli and Palestinian politics feature parties named “Future”) headed by Samir Masharawi, and Sari Nusseibeh, who are backed by exiled Fatah leader Mohammed Dahlan.

Israel, PA can live without Hamas in the West Bank

"There is no guarantee that the leaders of these lists will not make a deal with Hamas," adds Kuttab.

And so Hamas has been receiving breakaway Fatah figures in Gaza. "Hamas encourages the creation of a strong Fatah current composed of figures who are expelled from Fatah, in an attempt to weaken Abbas and find an alternative leadership through the elections," writes Ahmad Abu Amer from Gaza.

For all their disagreements and acrimony, however, the governments of both the Palestinian Authority and Israel share a worry that a Hamas alliance with one of the breakaway Fatah factions would expand the Islamic resistance group’s presence and influence in the West Bank.

Ahmad Melhem reports here on increasing attacks on Future and other non-Fatah candidates in the West Bank. Some "internal parties" are suspected of being behind the attacks.

Meanwhile, Melhem reports here on the Israeli crackdown on and arrests of Hamas leaders in the West Bank, and Adnan Abu Amer writes here on how Hamas has sustained its military capabilities, in part through support from Iran.

Jerusalem Palestinians may be left out

Kuttab explains that Israel has not made a final call on the voting process for Palestinians living in Jerusalem. Rina Bassist reports here on the fighting between Arab and Jewish residents. Kuttab observes that the Israeli stall could provide at least partial cover for Abbas to postpone elections.

Aziza Nofal reports from Ramallah that while women are represented in greater numbers on the legislative lists, recent changes to the electoral law may end up reducing the number of women who end up serving if the elections go ahead.

US leaves it up to the "Palestinian people"

Given the turbulence in both Israeli and Palestinian politics, it is no surprise that the Biden administration has played it low key.

Netanyahu may be trying "to drum up an escalation vis-a-vis Iran" for political gain, as Caspit writes, but no one seems to be buying this time.

Bennett is unlikely to be any less wary than Netanyahu of a nuclear deal with Iran, the key sticking point in US-Israel relations.

The Biden administration is also not taking a position on Palestinian elections. State Department spokesman Ned Price said April 1 that elections are a "matter for the Palestinian people to determine."

The catch is that Palestinians want these long-overdue elections, and if they don’t happen, it will be the decision of the Palestinian leadership, not the "people."