Facing a corruption indictment and seemingly boxed in, Netanyahu is still standing. 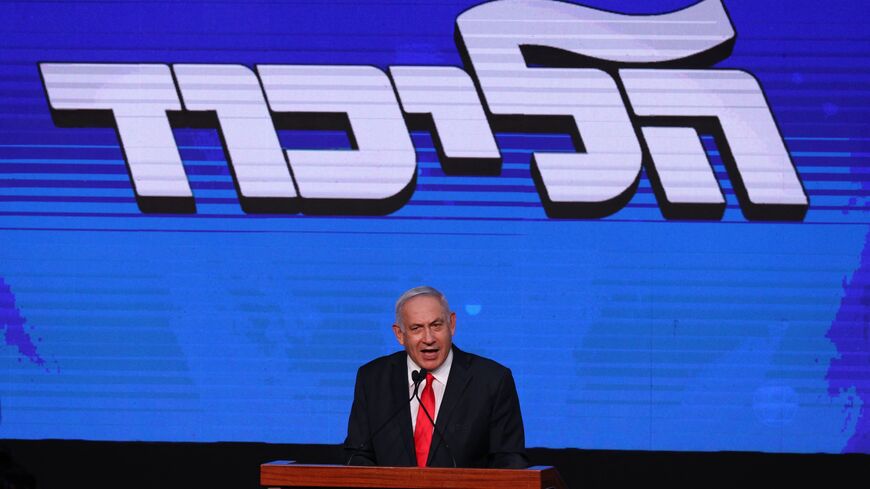 Israeli Prime Minister Benjamin Netanyahu, leader of the Likud party, addresses supporters at party campaign headquarters in Jerusalem early on March 24, 2021, after the end of voting in the fourth national election in two years. - EMMANUEL DUNAND/AFP via Getty Images

Looking for a lifeline

Netanyahu’s Likud Party-led coalition has 52 seats; his opponents have 57. Two other parties have 11.

The goal is 61, for a ruling majority in Israel’s Knesset, and it won’t come easily for easier side.

One image that comes to mind is a Wrestlemania main event, with Bibi getting popped from corner to corner by an array of foes and former friends — New Hope Party leader (and former ally) Gideon Saar; Israel Our Home party (Yisrael Beitenu) chair Avigdor Liberman (another former Bibi ally); and center-left There is a Future (Yesh Atid) chief Yair Lapid.

Bibi isn’t falling to the mat, though, and instead is looking for a tag from a possible supporter, either from the New Right Party (Yamina) leader Naftali Bennett (Bibi’s former chief of staff), who holds seven seats, or Mansour Abbas of the United Arab List Party (or Raam Party according to its Israeli acronym), who holds four. (More on Abbas below.)

Neither alone can put Bibi over the top, but the opposition appears no closer to victory. And a draw, for Bibi, could be a win. If neither he nor his opponents can form the next government he keeps the premiership through November during preparations for a fifth election, when he can regroup to fight again.

Among the many story lines in the election has been the campaign of Abbas, who won four seats with his breakaway United Arab List, leaving the remaining parties in the Arab Joint list with just 6 seats.

Until this election, Mansour’s Raam party, the official southern branch of the Islamic Movement, with its alleged affinity for Hamas and the Muslim Brotherhood, had been a no-go for Israeli politicians.

Raam campaign manager Aaed Kayal told Afif Abu Much, "The goal of Raam’s campaign was to initiate political dialogue, not only within Arab society, but also on the right and the left. This would put the party and the Arab citizens it represents at the center of the public discourse. This dialogue got the entire country to talk about Mansour Abbas and also about Raam’s new approach to politics, which overwhelmed its main competitor for the Arab vote. The Joint List may be made up of three established parties, but this time around, they found themselves outside the political game.”

Abbas’ role as a presumed broker of Israel’s political future may be fleeting. While his campaign shook up the Arab constituency, it remains to be seen whether Israel’s right-wing political leadership, including those opposed to Netanyahu, are ready to tolerate Arab politicians in an Israeli government.

While Netanyahu openly flirted with Abbas and cultivated Arab votes during the campaign, Saar and Liberman, as well as others on both sides of the Bibi divide, have rejected having the Arab parties be part of the next government.

"After the Joint List's dizzying success in the 2020 election, in which it won 15 seats, the coalition lost touch with the Arab electorate, which is more concerned about day-to-day problems," Abu Much writes. "In this election, Arab voters were less interested in replacing Prime Minister Benjamin Netanyahu. They remembered what happened last time, when Defense Minister Benny Gantz and the Blue and White Party turned their back to them and formed a government with Netanyahu after campaigning to oust him. The center-left failed to realize that there can be no government without Arab representation."

A wily gang of four

When Saar broke with Bibi in December 2020, the expectation was his New Hope Party would get as many as 20 seats, including center-left voters willing to rally to topple Netanyahu, despite Saar’s hard-right views. While Saar couldn’t hold the center, his position may be stronger than his six seats reveal. In any case, the ripples of Saar’s break may have cost Netanyahu more than the six seats.

"Saar lost the battle, coming in at a disappointing six seats, but he has probably won the war," writes Ben Caspit. "Short of a miracle, Netanyahu not only lacks sufficient support to form a government, on April 5 he must present himself in court for the start of the evidentiary stage in his corruption trial. This time, even this undisputed political genius will have a hard time surviving."

Caspit views the political landscape as slightly tilted against Netanyahu, because of the formidable opposition.

"And then there is of course Yair Lapid," Caspit continues. Lapid was sidelined during previous elections when he partnered with Blue and White, but has now come into his own, garnering 17 Knesset seats that placed his party second after the Likud.

Gantz’s near death and resurrection

This "Gang of Four" arrayed against Netanyahu puts Bibi at risk in a way that his rival last time, Blue and White leader Benny Gantz, was unable to do. Netanyahu’s deal for a coalition government was widely thought to be a political toxin for Gantz, who was thought to face "annihilation" in this election round.

But Blue and White ended up with eight seats, and is not out of the game. "The quasi-religious term 'resurrection' is appropriate to describe Gantz’s election outcome," writes Mazal Mualem. "Gantz, by the way, is currently the minister of defense in Netanyahu’s transition government, and according to their May 2020 coalition agreement, he is scheduled to switch jobs with Netanyahu and become prime minister in November 2021. Some are hoping that if a new government is not formed by then, Gantz would indeed take over as prime minister.”

Lapid is most likely to be asked by President Reuven Rivlin to take first crack at forming Israel’s next government, and the math to cobble the 61 votes is more advanced calculus than arithmetic. Bennett could be pivotal, and he’s keeping his cards close. The fear of a deal with Arab parties could spark right-wing and settler parties to shift alignment. Or it could all collapse and Netanyahu hangs on until round five, as Mualem suggests.

"Anyone else would have viewed these developments as a clear signal that it was time to go home," Caspit concludes. "Any other leader would have launched secret talks with the state prosecution on a quick plea deal over his corruption indictment and retired from political life. Netanyahu is not any other leader. He is the man who never gives up and there is no knowing what he might pull out of his sleeve in the coming weeks. He has been dealt a painful punch, he is licking his wounds, but he still standing in the ring."