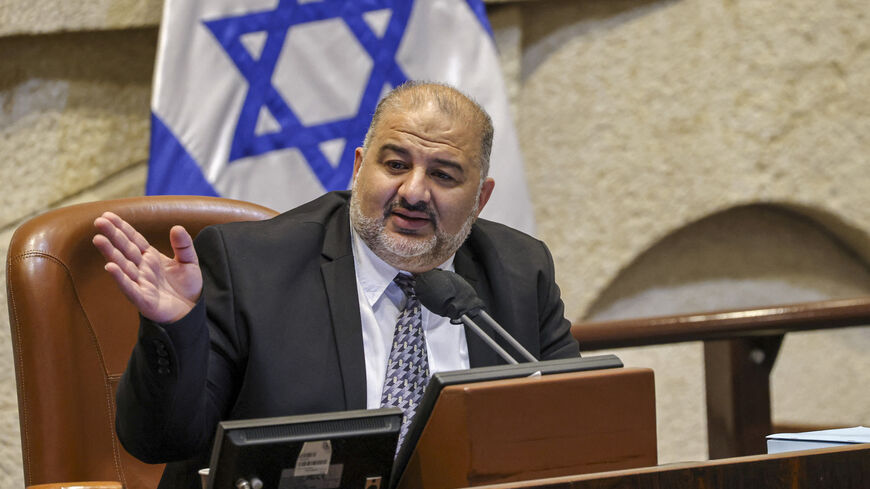 Mansour Abbas, head of Israel's conservative Islamic Raam party, speaks in his capacity as Knesset deputy speaker during a plenum session on the state budget on Sept. 2, 2021. - AHMAD GHARABLI/AFP via Getty Images

Mansour Abbas, head of the United Arab List (Ra’am Party), has taken Israeli politics in new directions. No Arab politician has had anything like the impact he has on Israeli politics. And  because of his star turn as a power broker and deal maker, and his willingness to speak out, he’s now in the spotlight.

His ascent began when Abbas stepped into Israeli coalition politics, a first for an Arab legislator. He instantly became a player, given the narrow margins in Israel’s parliament. Israel’s Arab citizens make up more than 20 percent, or about 1.9 million, of Israel’s 9 million citizens. Nevertheless, their role in Israeli politics had been mostly on the sidelines. That suited Israel’s right-wing and centrist parties, which pretty much ignored the Arab Joint List, which had a near-monopoly on the Arab vote.

Abbas realized that Arab citizens and legislators had an opening. And it was, bizarrely, former Prime Minister Benjamin Netanyahu who showed the way for the first time this year by courting the Arab vote in Nazareth and other Arab cities and towns, sporting the moniker “Abu Yair” (“father of Yair” in Arabic).

In the precarious world of Israel politics, Abbas suddenly had power. He was on Bibi’s speed dial, as the PM tried to entice Abbas to his side, despite opposition and disbelief from members of Likud and other right-wing parties. But in the end Abbas aligned with the coalition of “New Right” (Yamina) party leader Naftali Bennett and centrist “There is Future” (Yesh Atid) party chair Yair Lapid to oust Netanyahu as PM, by a vote of just 60-59 in the 120-member Israeli parliament, or Knesset. (It was too bold a move for one of Abbas’s four Ra'am members, who abstained from the final vote on June 13).

The alliance's next do-or-die moment was to be the budget vote this month. Netanyahu, relegated to leader of the Knesset opposition, where his Likud party holds 29 seats, more than any other party, went all out to pick off one of two right-wingers from Bennett’s party (which has seven Knesset members). As part of his “comeback salvation campaign,” as Ben Caspit writes, Netanyahu abandoned his previous wooing of Abbas, instead resurrecting an old charge that Ra'am is linked to the Islamic Resistance movement (Hamas).

The center held, with Ra'am’s backing, and the budget passed on Nov. 5, a major achievement, given the diversity of the coalition, which had seemed until the vote to agree only on keeping Bibi out of power, as Caspit reports.

Nor was Abbas a bystander in the budget negotiations. He secured accomplishments such as a five-year plan for socioeconomic development in Arab communities ($9.6 billion), a national plan on crime and violence for Arab communities ($800 million), the creation of a new Bedouin city in the Negev, and the recognition of three Bedouin villages, as Afif Abu Much reports.

Abbas seems to be at ease in the center of the storm. On Nov. 9, Israeli media lit up with reports of his meeting in Amman with King Abdullah of Jordan. Abbas commended the king for his position on the Palestinian issue, supporting a two-state solution in the pre-1967 borders, and the status quo in Jerusalem.

Netanyahu, sensing another political gift, accused Prime Minister Bennet of “selling Israel off in a going-out-of-business sale“ by allowing the meeting and including Abbas in his government. “The news was a major embarrassment for Bennett, who often stresses that according to the coalition agreement, Abbas would focus on civil affairs exclusively,” Mazal Mualem writes.

The day after his meeting with the king, though, Abbas dug in further on the Jerusalem issue, saying that “the United States has already recognized Jerusalem as the capital of Israel, so it would be appropriate to have a balancing act. If this step contributes to establishing peace, then all the better.”

These remarks further concerned Bennett and his coalition partner, Foreign Minister and Alternate Prime Minister Lapid, who had presented a united front in opposing the US opening a Palestinian consulate in Jerusalem, as the Biden Administration has said it will do.

The gap between Arab voters and the government remains wide. In Jerusalem, Palestinian families in Sheikh Jarrah are showing “a new spirit of defiance that is being seen in different parts of the occupied territories,” Daoud Kuttab reports. Israeli authorities have also bulldozed parts of a historic Muslim cemetery near Al-Aqsa Mosque, and expanding settlements by Jerusalem airport are further stoking tensions in the city, as Ahmed Melhem reports here and here.

Yet Abbas is riding a wave of unusual influence, both in Israeli politics, where he holds sway as a make-or-break member of the narrow governing coalition, and, increasingly, in broader Arab-Israeli and Palestinian questions, by staking his claim on the Jerusalem file.

“The main beneficiaries” of the events of recent weeks “are Abbas, who just upgraded his political standing in both Israel and the Arab states,” Mualem concludes, “and the [Israeli] right, who had an issue to undermine the government handed right to them.”

In an exclusive interview with Al-Monitor in northeast Syria, Mazlum Kobane, commander in chief of the Syrian Democratic Forces, told Amberin Zaman that he is not expecting Turkish President Recep Tayyip Erdogan to invade Syria again, because Washington and Moscow won’t allow it.

“Unless Turkey gets the approval of either Russia or the United States, Erdogan cannot take such a step. And as far as I am aware, there is no such approval,” Kobane told Zaman.

Asked about rumors of negotiations between the Kurdish Democratic Union Party and the Syrian government, Kobane said “there have been some contacts, but none of those meetings evolved into negotiations.”

You can read the full exclusive interview here.