Elections in Israel, Iran and Iraq shook up status quo; Syria’s presidential contest a blow to the UN process; Libya and Palestine took a pass on elections, with consequences as well. 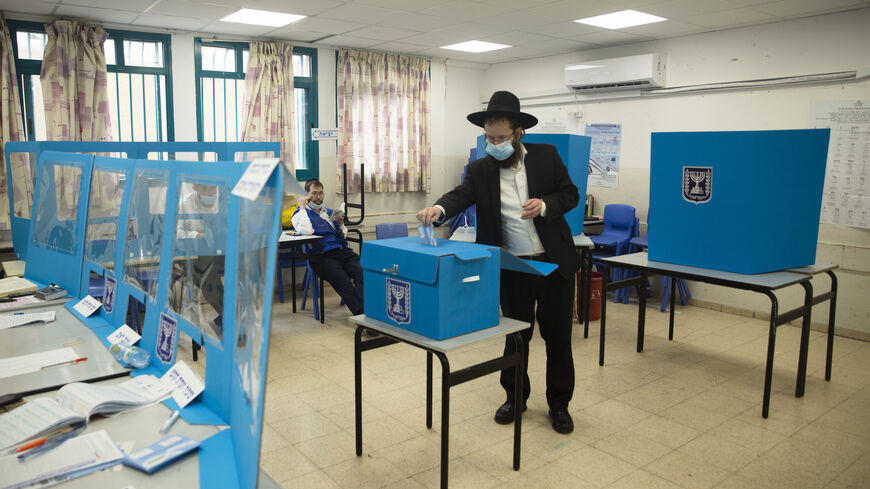 An Orthodox Jewish man casts his vote as Israelis head to the polls on March 23, 2021 in Bnei Brak, Israel. - Amir Levy/Getty Images

One of our takeaways of 2021 was that elections had consequences. The contexts and impact of elections varied from country to country. But elections in 2021 were impactful for better, worse, or both. Here is our list of four elections, and two non-elections, we consider as consequential, and why.

The fourth Israeli elections in two years revealed a divided electorate, with Prime Minister Benjamin Netanyahu’s Likud Party receiving the most votes (24.9% of ballots cast), and the most seats (30) in the 12-member Knesset, or parliament.

But Israel’s longest serving prime minister (1996-1999; 2009-2021) had burned too many bridges to cobble a new ruling coalition. A center right alliance of “New Right” (Yamina) party leader Naftali Bennett and centrist “There is Future” (Yesh Atid) party chair Yair Lapid ousted Netanyahu by a Knesset vote of just 60-59 in the 120-member Israeli parliament more than two months later, on June 13.

One key takeaway of the elections was the star turn of Mansour Abbas, head of the United Arab List (Ra’am Party). Although Ra’am has only four members, Abbas was courted by both Netanyahu and the Bennett/Lapid coalition. Never before has Israel’s Arab citizens, which make up more than 20%, or about 1.9 million, of Israel’s 9 million citizens, had such influence in Israeli politics.

Another trend is Israel’s continued opposition to a revival of the 2015 Joint Comprehensive Plan of Action (JCPOA, or Iran nuclear deal). Israel’s new government may differ in style from Netanyahu, but not in substance when it comes to Iran. Ben Caspit has the scoop here on how the US shift to increased sanctions pressure and hints of a credible military option are a vindication for the Bennett/Lapid government, "which has sought, delicately and in the spirit of partnership, to remove the 'dark shadow' of differences over Iran policy in US-Israel relations."

Iran’s presidential election was marked by apathy among the electorate and the people’s awareness of deck-stacking by Supreme Leander Ayatollah Ali Khamenei and his conservative acolytes on the Guardian Council, which vets electoral candidates, as we wrote here.

Only 48.8% of Iranians voted, the lowest turnout since the 1979 revolution, and despite a last minute get-out-the vote drive led by Khamenei.

Of those, 62% voted for Ebrahim Raisi, who is associated with the "principlist" or right wing political parties, in contrast to his predecessor, Hassan Rouhani, who had forged an alliance with Iranian centrists and reformists, who had been crushed in the 2020 Islamic Consultative Assembly (Majles, or parliamentary) elections.

Perhaps as a kind of protest vote, invalid or blank votes came in second at 13% (previous blanks composed only 2.2% of ballots in previous elections), as Sarbas Nazari reports.

Rouhani and his supporters paid a political price when the Trump administration withdrew from the JCPOA in May 2018 and reimposed sanctions which setback Iran’s economy, which had been boosted by the nuclear deal.

Raisi has slow-rolled the Iran nuclear talks, but negotiations are ongoing in Vienna. Despite the harder line, he has strong incentives to cut a deal. At his swearing in before the Majles on Aug. 5, Raisi said "sanctions against Iran must be lifted and we will support any diplomatic plan that achieves this goal."

In a potential sea change for Iraqi politics, parties aligned with Iran, which had previously been considered as a broker of Iraqi electoral politics, lost, and independents, associated with the October 2019 protest movement, gained.

The top vote getter of the elections to the 329 seat Council of Representatives, or parliament, was Iraqi populist cleric Muqtada al-Sadr, who gained 73 seats.

Iraqi Prime Minister Mustafa al-Kadhimi came to office in May 2020 after the resignation of his predecessor, Adil Abdul-Mahdi, who was forced to step down following a brutal crackdown by security forces on pro-democracy protesters.

Kadhimi, a former journalist and human rights activist, committed to reform in response to protesters’ demands,and called for early elections. His government enacted a new and transparent electoral law, working closely with the United Nations.

Akeel Abbas writes that with the certification of Iraq’s election results this week, "the constitutional clock starts ticking and deadlines have to be met: Within 15 days of the certification, the new parliament has to convene and elect its speaker. The biggest bloc has to be registered at the same session. Within 30 days of this parliamentary session, the parliament should elect a new president who will task the biggest bloc with forming the government."

Syria (May 26, 2021): Assad reelected amidst collapse of UN process

No surprise that Syrian President Bashar al-Assad overwhelmingly won re-election, and we won’t waste space on getting into details.

While the Syrian government told UN Syria Envoy Geir Pedersen that the election was disconnected from the UN-mandated constitutional drafting process, the elections and subsequent events perhaps signaled the obvious: that UN Security Council Resolution 2254 (2015), which outlined the political process to end the civil war, is increasingly a dead letter.

Pedersen referred to the latest negotiations among the constitutional committee members in October as "a big disappointment." and said the delegation sent by Damascus failed to present the necessary proposal.

As we report here, Pedersen has been forced to take a new approach. “I think there is a possibility now to start to explore what I call a 'step-for-step' approach where you put on the table steps that are defined with precisions, that are verifiable, that hopefully can start to build some trust,” he said after meeting with Syrian government officials in December.

Palestinian President Mahmoud Abbas "infuriated many Palestinians by canceling elections after it appeared that support for his ruling Fatah party coalition in the West Bank had hollowed out. Abbas and Fatah faced likely losses, both to former Fatah leaders who had broken with Abbas and set up new parties, and to Hamas, the Islamic Resistance Movement which governs in Gaza and which until now had only a smattering of support in the West Bank," we wrote in June.

"Abbas justified the cancellation by accusing Israel of not allowing Palestinians living in Jerusalem to vote, which most Palestinians didn’t buy; they saw through his calculation, whatever their grievances with Israeli actions in Jerusalem, where protests were already on high boil over Israeli evictions of Palestinians from the Jerusalem neighborhood of Sheikh Jarrah," we explained.

"No need to recount the events that followed; Israel and Hamas, seeking to capitalize on the confrontations in Jerusalem, were on full war footing by May 10."

Abbas’s popularity has sunk to even lower depths since. Palestinians view Abbas and the PA as “indirectly complicit with perpetuating the status quo of a permanent occupation,” as Daoud Kuttab explains.

Libya postponed elections scheduled for Dec. 24, as part of the UN-brokered agreement to end the civil war and reconcile warring factions. But foreign forces continue to meddle and disrupt the fragile process, as North Africa expert Jalel Harchaoui explains to Amberin Zaman.