Following killing of a political dissident, the Palestinian president’s hold on power continues to weaken, while support for Hamas is growing. 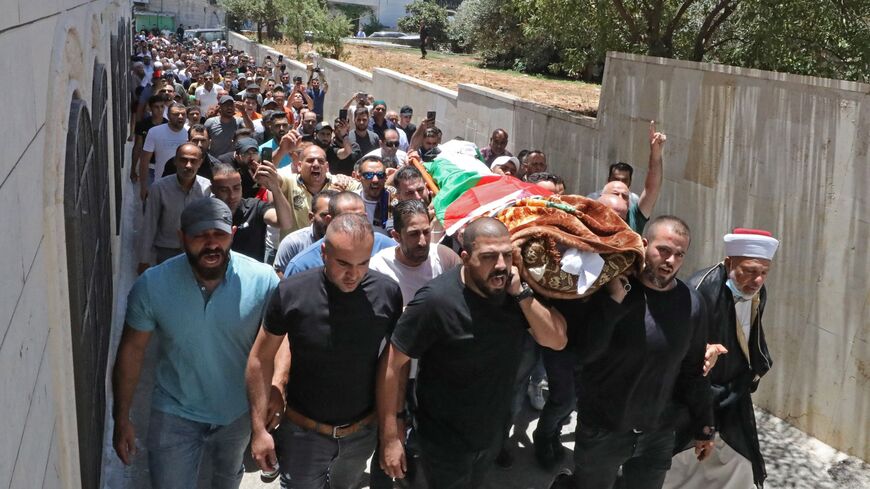 Abbas shaken by backlash at home and abroad

Let’s start in the West Bank, where popular discontent with President Mahmoud Abbas and the ruling Palestinian Authority (PA) may have reached a tipping point following the death of Nizar Banat in police custody after a brutal beating during an arrest at his home in Hebron.

Banat’s crime seems to have been nothing more than his frequent criticism of the PA, as Daoud Kuttab reports.

Demonstrators chanting "the people want the downfall of the regime" were repelled by PA security forces in Ramallah as they approached Abbas’ compound June 24, while protests and riots continued throughout the day.

Tor Wennesland, the UN special coordinator for the Middle East peace process, has called for an independent investigation into Banat’s death. Nobody is putting much stock in the PA’s own inquiry.

Abbas infuriated many Palestinians by canceling elections April 29 after it appeared that support for his ruling Fatah party coalition the West Bank had hollowed out. Abbas and Fatah faced likely losses both to former Fatah leaders who had broken with Abbas and set up new parties, and to Hamas, the Islamic Resistance Movement which governs in Gaza and which until now had only had a smattering of support in the West Bank.

Abbas justified the cancellation by accusing Israel of not allowing Palestinians living in Jerusalem to vote, which most Palestinians didn’t buy; they saw through his calculation, whatever their grievances with Israeli actions in Jerusalem, where protests were already on high boil over Israeli evictions of Palestinians from the Jerusalem neighborhood of Sheikh Jarrah.

No need to recount the events that followed; Israel and Hamas, seeking to capitalize on the confrontations in Jerusalem, were on full war footing by May 10.

Over the next 10 days, Hamas and the Islamic Jihad fired more than 4,300 rockets from Gaza into Israel, killing 12 people, including two children. Israeli fire and other violence killed 243 Palestinians, including 66 children. As many as 72,000 Palestinians were displaced. In addition, the Israeli strikes caused severe damage to Gaza’s already inadequate health, education and public works infrastructure, as we reported here.

Yet the crisis bolstered Hamas’ standing. Recent polling shows a precipitous drop in support for Abbas and Fatah, and a corresponding rise for Hamas, as Daoud Kuttab reports. There is widespread discontent over perceived PA corruption, the cancellation of the elections, the poor state of governance and the economy, and Abbas’ handling of the confrontation with Israel, where he was mostly a bystander, despite a call from US President Joe Biden.

The Biden administration, unwilling to work with Hamas, which the United States has designated a terrorist organization, threw Abbas a lifeline by saying it would coordinate aid and assistance to Gaza via the PA.

Meanwhile, "the combination of a more involved Biden administration and a newly established Israeli government … whetted the appetite of the Ramallah leadership that was desperately looking for ways to become relevant and improve its standing," Kuttab writes.

Israeli policies in the West Bank have compounded Palestinian frustration with the PA. Palestinians have adopted "night confusion" tactics, inspired by Hamas, to harass settlers in the West Bank, as Ahmad Melhem reports. The protests in Sheikh Jarrah has given renewed attention to Israeli settlement policy (check out the article by Aziza Nofal on the Palestinian short film "The Place" about Sheikh Jarrah).

In Hebron, another West Bank flashpoint, the decision to install an electric elevator and build a road to facilitate access for settlers with special needs to the Ibrahimi Mosque (the Cave of the Patriarchs) may entail seizing Palestinian lands surrounding the mosque, Melhem reports.

Hamas has so far rejected Abbas’ efforts, through Egyptian mediation, to discuss a unity government, as Adnan Abu Amer reports. Hamas senses it is riding a wave of support at Abbas’ expense, and wants concessions to further strengthen its own position, including regarding the distribution of international reconstruction assistance to Gaza.

So far there is a lack of clarity on the process for reconstruction assistance, including who controls which funds, since Hamas is not in the loop, as Hana Salah reports. Gazans whose homes were partially or totally destroyed worry that the political dispute between Hamas and the Palestinian Authority will further delay assistance, as Mai Abu Hasaneen writes.

The World Bank notes that Gaza’s contribution to the already fragile Palestinian economy has declined by half in the last three decades. Prior to the damage caused by the latest escalation, Gazans suffered from the lingering costs of previous wars, "prolonged closures, restrictions on economic activities, and the effects of the COVID-19 pandemic. Even before the recent hostilities, Gaza suffered from 48% unemployment, and half of the population lived in poverty."

A recent high-level World Bank delegation to Gaza noted the impact of mental trauma on children resulting from the 10-day bombing campaign, in addition to the loss of life and heavy toll on Gaza’s economy and infrastructure.

Entsar Abu Jahal reports from Gaza City on how parents and children are making out after dealing with the trauma of the bombing campaign. Mai Abu Hasaneen reports here on how women have suffered increased increases in violence since the start of the COVD-19 pandemic.

Abu Jahal also observes that pets have not been spared the effects of the bombing campaign.

Assistance to Gaza is also complicated by Israeli insistence on a prisoner swap with Hamas before further restrictions are lifted, as Hana Salah reports here.

"A prominent Hamas leader told Al-Monitor that the movement’s chief, Ismail Haniyeh, promised Fadwa al-Barghouti, the wife of senior Fatah leader Marwan al-Barghouti, that her husband’s name will be on top of the list of released prisoners in any swap deal between Hamas and Israel," Rasha Abou Jalal reports.

Marwan Barghouti is the most popular Palestinian leader, according to numerous polls and surveys.

Hamas has also been testing the new Israeli coalition government by sending incendiary balloons into Israel which, as Ben Caspit reports, ignited dozens of fires and burned hundreds of acres of farm and forest land in Israeli border communities.

In response, Israeli planes bombed Hamas targets in Gaza the night of June 17, and is preparing for the possibility of a resumption of hostilities.

State Department spokesman Ned Price said June 24 that the United States has "serious concerns about Palestinian Authority restrictions on the exercise of freedom of expression by Palestinians and harassment of civil society activists and organizations."

Abbas and the PA are under siege by their own people, Hamas is on the ascent, and the new Israeli government, like the previous one, has little interest in reviving peace talk with the Palestinians. US Sen. Jim Risch of Idaho, the ranking Republican on the Foreign Relations Committee, is holding up US assistance to Gaza promised by the Biden administration.

The roles of US partners — Egypt, Jordan and Qatar in particular — take on even greater weight in helping prevent a complete breakdown of Palestinian institutions and another round of Israeli-Palestinian conflict.