Signs are showing of a new prisoner/detainee swap between Israel and Hamas as part of the truce signed in Cairo. 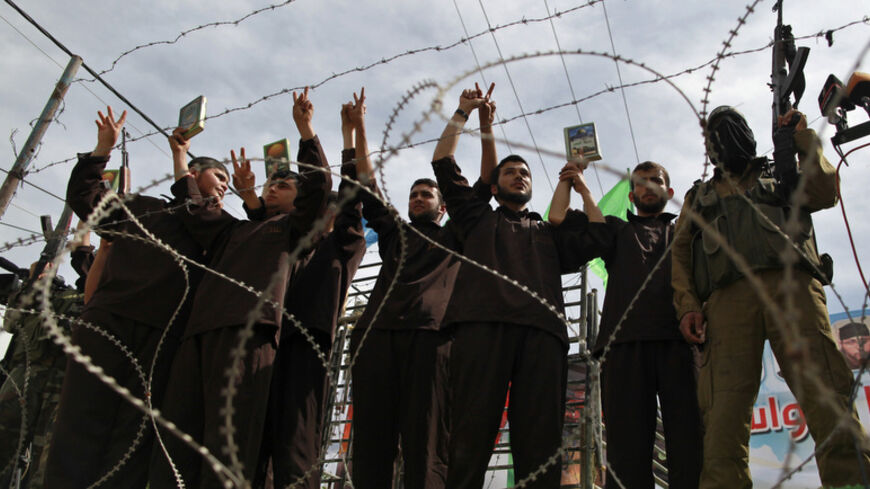 Hamas supporters take part in a rally calling for the release of Palestinian prisoners from Israeli jails, in Jabalya, in the northern Gaza Strip, April 13, 2012. - REUTERS/Mohammed Sale

As soon as the Gaza war ended on Sept. 26, talks in the Strip began circulating about the countdown for a new prisoner exchange deal between Hamas and Israel, since the movement was still holding Israeli soldiers it had abducted during the last war on Gaza.

The latest news of such a deal was the announcement of Mohammad Atwan, member of the Legislative Council of Hamas, on Oct. 14, concerning positive signs of a coming deal with Israel in which the movement’s demands would be met, without disclosing additional details; still, he confirmed that an exchange deal is going to take place soon.

In an interview with Al-Monitor, a Palestinian official close to President Mahmoud Abbas, who wished to remain anonymous, said, “Hamas asked to carry out exchange negotiations with Israel, separately from the cease-fire negotiations, since it will choose another delegation other than the united Palestinian one, due to the sensitivity of the fate of the kidnapped Israeli soldiers. The Israelis did not tell the Egyptians about their stance concerning Hamas’ request; however, it is obvious that they want to carry on with this matter and close the page on the Gaza war, including the missing soldiers.”

He told Al-Monitor by phone from Ramallah, “Hamas and Israel want to sign a prisoners exchange deal soon, and there are signs from both parties; Hamas’ separate delegation and Israel’s new official [assigned] for the missing soldiers file indicate that we are on the verge of closing this page, since an exchange deal ensures the implementation of the cease-fire and the extension of the calm period in Gaza.”

Mahmoud al-Zahar, member of Hamas’ political bureau, said Sept. 18 that the indirect negotiations to implement the cease-fire do not include Hamas’ liberation of the prisoners and bodies of Israeli soldiers, since this file is separate and should only be discussed between the kidnappers, al-Qassam Brigades and Israel.

Signs indicating the possibility of a close exchange deal, through posters signed by Hamas in the streets of Gaza since the beginning of October that read “Soon, Wafa al-Ahrar Deal.” Hamas gave this name to the first prisoner swap in 2012. The poster in question includes the picture of Aaron Shaul, the Israeli soldier kidnapped by Izz ad-Din al-Qassam Brigades on July 20 during the Gaza war, in addition to a question mark, indicating the possibility of another soldier being present in Hamas prisons.

Al-Monitor learned that there were internal discussions within Hamas concerning an exchange to show the achievements of the Gaza war after its demands were not met to lift the siege, open the crossings and start the reconstruction.

Al-Monitor also learned that these discussions confirmed Hamas' dedication to seal an exchange deal to get the needed popular dimension at this stage. It is insisting on this deal for fear that the demands the group raised during the war will not be met.

Hamas leader Mohammad Nazzal, currently in Jordan, wrote on his Facebook page on Oct. 9 that the exchange negotiations would soon begin, but gave no additional information regarding the number and situation of the Israeli prisoners in Gaza.

Mushir al-Masri, media spokesman of Hamas’ parliamentary bloc, told Al-Monitor, “The movement promised the Palestinians a new victory, represented by a second exchange deal, but did not reveal any information regarding the prisoners and bodies of Israeli soldiers. Hamas promised a new deal and it is capable of achieving it, in addition to any separate talks concerning the implementation of the cease-fire.”

Ismail Haniyeh, vice president of Hamas’ political bureau, alluded on Oct. 6 that Hamas holds many surprises, which it will reveal in the coming days, in reference to a nearing exchange deal with Israel.

Al-Monitor met with a Hamas military official, who wished to remain anonymous, and asked him about al-Qassam Brigades’ prisoners. He said, “Such information will not be given for free through the media. We learned this lesson from the previous exchange deal. Israel is bound to pay a high price if it wants to know [more] about the soldiers we have kidnapped. This is a well-known matter by the delegation, which will be designated by Hamas to negotiate the deal, without determining whether it will include military or political officials, or both.”

He said, “Behind the scenes, there is a ‘war of the minds,’ since the Israeli intelligence services are making back-breaking efforts, that we all know very well, in order to determine the real situation of its soldiers behind al-Qassam Brigades’ bars”.

Hussam Bedran, a Hamas spokesman residing in Qatar, told Al-Monitor, “Israel is mobilizing its security apparatus in order to gather information regarding its missing soldiers in Gaza. From experience, we have learned that what is said in the media is part of the battle’s management. Israel is concerned with bringing up this matter every once in a while, through statements and rumors in order to create some kind of confusion, in hopes of gaining information for free. However, the liberation of the prisoners will occur as promised by Hamas, without indicating the names of the prisoners that Hamas will ask to be freed.”

Israeli-Arab Knesset member Ibrahim Sarsour demanded that Hamas obtain the freedom of 48 Arab prisoners in the upcoming deal with Israel.

Mohammad al-Zyoud, secretary-general of the Islamic Action Front, the political wing of the Muslim Brotherhood in Jordan, sent a letter to the head of Hamas’ political bureau, Khaled Meshaal, on Oct. 6, requesting the inclusion of the 22 Jordanian prisoners in Israeli prisons in the upcoming deal.

An Egyptian official, who refused to reveal his name, told Al-Monitor over the phone, “Cairo is concerned with accomplishing all truce-related matters, including the exchange deal, as it seeks to preserve the security on its borders with Gaza and avoid a new war. The deal will positively affect the continuity of the calm period in Gaza. Perhaps our previous experience in the [imprisoned Israeli soldier Gilad] Shalit deal would allow Egypt to be the main embracing environment for any upcoming deal.”

The Hamas military official told Al-Monitor, “Hamas is concerned with improving its relations with Egypt. It will sponsor the exchange negotiations since the movement trusts that Egypt is keen on liberating the Palestinian prisoners. However, Hamas will not close the door on any regional or international efforts alongside the Egyptian ones, which would push the deal forward at the required speed.”