Hamas: no cease-fire until siege of Gaza lifted

The United States is indirectly communicating with Hamas via its regional allies to negotiate a cease-fire, but Hamas is insisting that Israel lift its crippling siege on Gaza. 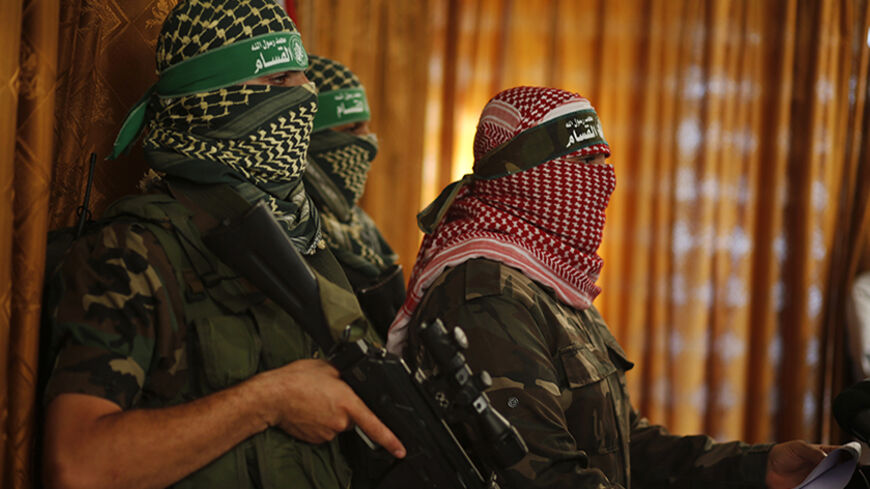 GAZA CITY, Gaza Strip — As the Israeli attack on Gaza enters its second week, more than 165 Palestinians have been killed, among them 41 children, 23 women and 15 senior citizens. An additional 1,130 Palestinians have been wounded, according to information obtained by Al-Monitor from the Ministry of Health in Gaza.

Amid these human losses, there are growing fears of an Israeli ground operation, which will further complicate the situation on the ground.

On the evening of July 10, Abu Abida, the spokesman for Hamas' military arm, the Izz ad-Din al-Qassam Brigades, asserted that a ground war offers an opportunity to free Israeli-held prisoners of war. The al-Qassam Brigades have prepared themselves for a long battle of many weeks. Abu Abida also said that Israel will not determine the timing of the conflict’s conclusion or its terms, emphasizing that the battle will involve many surprises.

Mahmoud al-Zahar, a member of Hamas’ political bureau, spoke to al-Aqsa satellite network on the evening of July 11 about his organization’s readiness for war. According to Zahar, the battle will be decisive and game changing, even if it continues for months.

Al-Monitor asked a high-ranking Hamas official currently residing outside of Gaza about the organization’s stance on a ground operation. The official believes it is unlikely Israel will send its troops into Gaza as it would result in casualties for the Israeli army. "We do not want Israel to take this step because it will cost the lives of many Palestinians, since Israel will follow a scorched-earth policy before its soldiers cross Gaza’s borders.”

“As the political leadership, we are in communication with fighters inside Gaza who are beginning military preparations for any Israeli attempt at a ground operation. They have field plans that could cause Israel to regret the decision to undertake such operation — they will kill many Israeli soldiers, target Israeli military vehicles and capture soldiers for use in prisoner exchanges,” the official added.

As a sign of readiness for an Israeli ground operation, the al-Qassam Brigades fired “Kornet” rockets at Israeli vehicles. The first landed to the east of Gaza at the Nahel Awz base, and the second near Beit Hanoun, north of Gaza, with the brigades claiming direct hits.

Raafet Marra, a Hamas official in Lebanon, noted at a recent press conference that he considered a ground operation unlikely because of Israel’s fear of the many surprises the al-Qassam Brigades have in store. He said that Israel is also reluctant to order its soldiers into an unknown world, as it lacks knowledge of the capacities, positions and tactics that await them. He said Israel fears a scene of destroyed tanks, burned vehicles, disfigured corpses and dead or captured soldiers.

At the climax of Israeli preparation for a ground operation, information was leaked about efforts to establish a cease-fire. The most important such effort was a July 10 telephone conversation between US President Barack Obama and Israeli Prime Minister Benjamin Netanyahu.

A Palestinian figure in Gaza who acts as a mediator between Hamas and the West revealed to Al-Monitor, “The US administration is making an effort to calm tensions between Hamas and Israel by means of its indirect communication with Hamas through its allies in Qatar and Turkey. This represents progress for the United States, given that it considers Hamas a terrorist organization. Nonetheless, the United States could overlook that classification to prevent the region from exploding.”

He added, “The Obama administration does not want wars in the region, and it is attempting to act as an intermediary between Israel and Hamas to arrive at a middle ground accepted by both sides. But its efforts are blocked by two considerations: first, the obstinacy of the current Israeli government, which has not yet achieved a military victory, and second, Hamas’ intention to lift the blockade of Gaza, implement reconciliation [with Fatah] and establish international guarantees for any potential cease-fire, which would partially open the door for future dialogue.”

During his speech in Doha on the evening of July 9, Khaled Meshaal, head of the Hamas political bureau, noted that he had received messages from Western and Eastern countries calling for a cease-fire and a halt to the firing of rockets. He refused those requests because Israel had initiated the hostilities, and emphasized the impossibility of a return to the formula of reciprocal de-escalation.

In his July 11 speech to the Beirut-based Al-Mayadeen television station, Palestinian President Mahmoud Abbas refused any prerequisites for a cease-fire. He noted that he had requested that Washington put pressure on Israel to stop its military operations, and had unsuccessfully tried to convince Hamas to halt its rocket launches.

Al-Monitor spoke to an official from the Palestinian Authority who revealed that “Israel wants to return to the agreements of the 2012 war — loosening the blockade on Gaza, expanding the area in which Gazans are permitted to fish and ending the isolation of the eastern zone. But Hamas has made greater demands, the most important of which is the release of 56 prisoners who were arrested following the recent Hebron operation, permission to import construction materials into Gaza, the opening of the Rafah crossing, the end of Israeli assassinations of Hamas members and the lifting of Israel’s veto on the reconciliation deal (between Hamas and Fatah).”

Al-Monitor learned from a Hamas media official that Qatar, Turkey, the United States, the European Union, Russia and the UN are seeking a cease-fire between Hamas and Israel. Egypt proposed a cease-fire on Monday, which Israel is considering, while Hamas is insisting on its demands to lift the siege.

A high-ranking employee at the Arab League in Cairo informed Al-Monitor that Hamas “has requested new mediators to guarantee a cease-fire with Israel, including the United States, Russia and the UN, along with Qatar and Turkey, rather than allow Egypt to play that role alone.” US Secretary of State John Kerry is due to visit Cairo on Tuesday to push for a cease-fire deal.

A Hamas source located in Doha told Al-Monitor that Meshaal “is engaging in marathon around-the-clock negotiations, including personal meetings with European, Turkish, Qatari and Russian parties. The United States is communicating with him indirectly through mediators, fearing that Israel and Hamas will cross the point of no return — the launching of a ground operation. Meshaal has received an order from the organization’s political and military leadership located inside and outside of Gaza to not halt the fighting until we have achieved for our people a total lifting of the siege, the opening of Rafah, the ability to establish a seaport and the end of the seizure of the West Bank.”

He concluded by saying, “The war on Gaza began after Israel reneged on the 2012 cease-fire. After this bloodshed and sacrifice, we will not accept anything less than the satisfaction of every one of Hamas’ demands. Hamas is ready for a battle that may last for quite a while, but we cannot accept this war’s cessation and Gaza’s return to the policy of slow death at any price. For that reason, it seems too soon to speak of a cease-fire.”