Hamas Deputy Chairman Mousa Abu Marzouk’s bombshell last week that the movement might embark on direct negotiations with Israel has sparked a furious debate within Hamas. 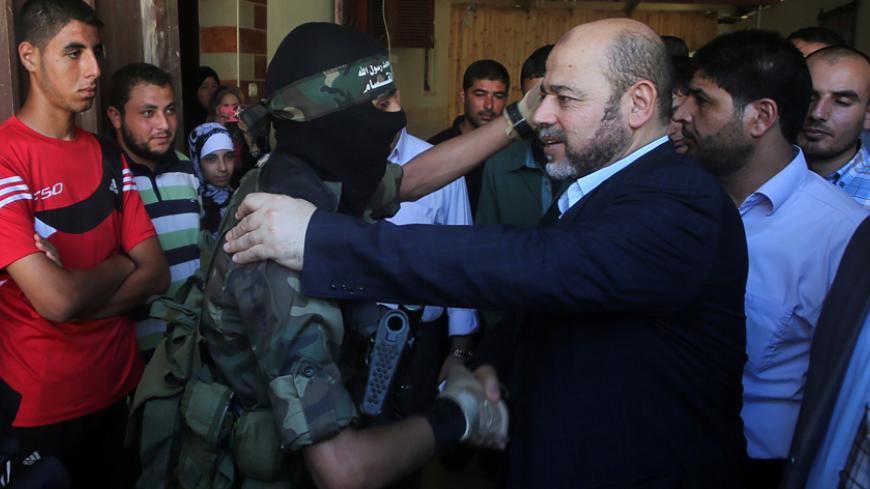 Hamas has weathered a great political storm in the past few days, following a Sept. 11 announcement by the deputy head of Hamas’ political bureau, Mousa Abu Marzouk, that the movement might undertake direct negotiations with Israel, since such negotiations have become a popular demand in Gaza but remain forbidden by law.

In the same interview, Abu Marzouk said, “Just as Hamas has negotiated with Israel using weapons, so is it possible to negotiate with words. If the situation in Gaza remains as it is now, Hamas could find itself forced to negotiate with Israel, and many of the things currently forbidden to the movement will be on the table.”

Abu Marzouk clarified his remarks in an interview with Al-Monitor on Sept. 15, saying it was a “quiet cry of anger,” while adding that there are difficulties in indirect negotiations due to the meddling of mediators.

Hamas responded as soon as Abu Marzouk let loose this unprecedented political bomb. Al-Monitor learned from a Hamas source that the “leadership has undertaken urgent internal and external communications to publicize its official position on Abu Marzouk’s statements, given the lack of total agreement within the group’s leadership over this political position on direct negotiations with Israel. Even if there were a specific future stance on the matter, there ought to be agreement over the timing of such a statement, which does not need to be announced through the media.”

The source added, “Up to the present moment, we are still suffering from the misfortunes of the Israeli war on Gaza. The blood of the martyrs has not yet dried, and those forced from their homes have not yet returned. Therefore, the timing of a certain statement on Hamas’ adoption of this historic position must take place through internal consensus, or at least by agreement at the level of the organization and its leadership.”

A brief statement published by Hamas’ political office on Sept. 11 announced that direct negotiation with Israel is not the movement’s policy and is not on the table for discussion.

The leader of Hamas, Khaled Meshaal, said at a Sept. 14 press conference in Tunisia that the movement’s fundamental policy is to pursue indirect negotiations, should negotiations be necessary.

Mahmoud al-Zahar, a member of Hamas’ political leadership, confirmed on Sept. 12 that the movement’s fixed political position will remain in place, but left the door open to other possibilities of communicating with Israel. He said, “We will remain against negotiations with Israel, but if President Mahmoud Abbas fails in his efforts to negotiate with Israel to lift the siege of Gaza and open border crossings, a seaport and an airport, then we may be forced to search for other means [of communicating with Israel].”

But a Hamas leader told Al-Monitor over the phone, “It could be that Abu Marzouk’s statements were misunderstood, inside or outside of Hamas. The man was not speaking about political negotiations with Israel, in which the PLO has failed. Rather, he was speaking about negotiations over the implementation of the cease-fire agreement, given procrastination by the intermediaries, Israel and the Palestinian Authority [PA], and their ineffectiveness on the ground.”

He added, “The uproar over Abu Marzouk’s statements are exaggerated, because he was not talking about political concessions to Israel. He was saying that Hamas, as a Palestinian national resistance movement, will arrive in the end at negotiations with Israel, because armed resistance is not a goal on its own but allows us to negotiate with Israel from a stronger position than one without military power.”

Al-Monitor has also learned from a high-ranking official in the PA that “Abu Marzouk’s statement left a negative impression on the leadership of the PA because it opens the way for Israel to negotiate with each Palestinian faction on its own, and play on a dispersed and divided field.” He said, “Abu Marzouk’s announcement effectively encourages Palestinian political division and is a blow to the Palestinian national struggle.”

But Ahmad Youssef, a former representative of Hamas’ Foreign Ministry who is close to Abu Marzouk, said that these statements will be seen in a good light by the international community. They highlight Hamas’ maturity and its understanding of political realities.

As a Hamas official told Al-Monitor, Abu Marzouk’s statements “tossed a big stone into the stagnant waters of Hamas on the issue of direct negotiations with Israel. Even if it was met with refusal by some segments of Hamas’ leadership, it opened a wide space for debate between those in favor and those opposed to direct negotiations. This is no longer a taboo topic for religious or political reasons. This alone is new for Hamas, and the future will be built upon it.”