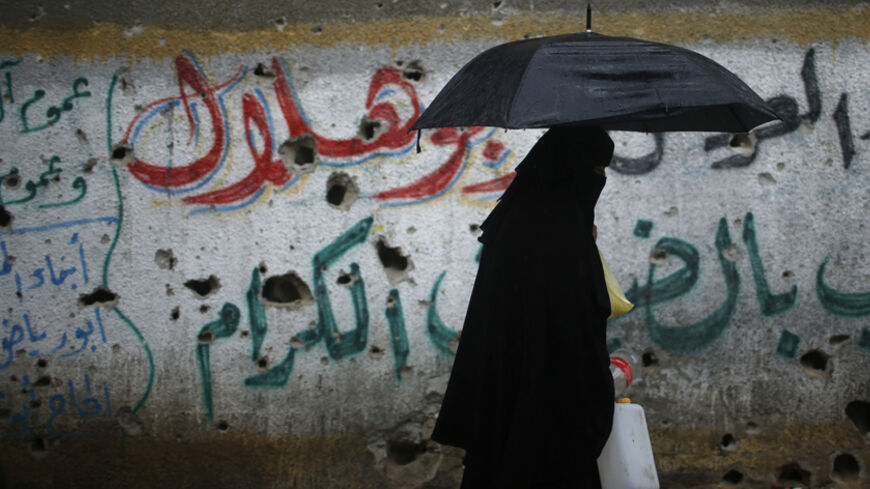 A Palestinian woman holds an umbrella as she makes her way to fill containers with water in Shajaiya neighborhood, which witnesses said was devastated during the Israeli offensive, in the east of Gaza City, Oct. 19, 2014. - REUTERS/Mohammed Salem

Palestinians in Gaza have yet to recover from the wounds of the recent Israeli war, especially those whose houses were demolished. Tens of thousands of people are still in evacuation centers, unable to restore their houses. There has been no improvement at the border checkpoints, which remain fully intact, and no reconstruction operations have kicked off. The Palestinians in the besieged Gaza Strip do not feel that the terms of the cease-fire agreement have been implemented.

Frustrated under the deteriorating conditions in Gaza, senior Hamas leaders have made several statements threatening to escalate matters.

The most remarkable threat was made by senior Hamas leader Mahmoud al-Zahar in a press interview on Oct. 27, when he alluded to possibly renewing the fighting if Israel fails to respond to Palestinian demands. Zahar said Israel is to be held accountable for any defect in the current security situation.

The deputy chairman of Hamas’ political bureau, Mousa Abu Marzouk, explained in a Sept. 21 interview that the movement does not want another war with Israel. He added that fighting would be inevitable unless Gaza's border crossings with Egypt and Israel are opened, knowing that there is no desire to return to war.

Hamas has stepped up its rhetoric against what it deems a slowdown in the reconstruction of Gaza, especially with the onset of winter and in light of the damage inflicted on areas ravaged by the Israeli army, namely in Khuza'a, in southern Gaza.

On Nov. 5, Al-Monitor attended a mass march organized in front of the UN Relief and Works Agenc for Palestine Refugees (UNRWA) headquarters in Gaza. During the march, supporters chanted slogans against the international reconstruction plan, which they deemed a policy of humiliation against Palestinians.

Amid fears of the situation in Gaza exploding, the director of UNRWA Operations in Gaza, Robert Turner, warned Nov. 5 against the outbreak of a new war in the event the siege continues and no reconstruction process is started.

Khalil al-Hayya, member of Hamas’ political bureau, urged, during a seminar in the Nuseirat refugee camp on Nov. 5, the owners of devastated houses to start a popular revolution to claim their rights. He blamed Israel, the Palestinian Authority and UNRWA for the reconstruction failure and warned of a popular explosion.

At the field level, Al-Monitor noted that during the weeks that followed the end of the last war, Hamas worked on organizing popular celebrations in honor of the families of the martyrs of the war. The movement recently held a ceremony on Nov. 8 in the presence of most of its senior leaders.

During the same ceremony, a military spokesman for Izz ad-Din al-Qassam Brigades said that the group's weapons stockpile was sufficient and it was ready to confront Israel, which, he said, is delaying and hindering the reconstruction of Gaza.

Al-Monitor attended a celebration organized by Hamas on Nov. 7 in Jabaliya in the northern Gaza Strip. The event included an al-Qassam Brigades graduation and military parades and demonstrations by 2,500 young men in the first regiment of the "popular army."

Mohammed Abu Askar, a Hamas leader in northern Gaza, told Al-Monitor, “This regiment's graduation was held because the movement is convinced that the liberation battle will unfold and that the confrontation with the Israeli enemy is imminent.”

For its part, Israel accused Hamas of experimentally firing rockets from Gaza toward the sea for the sixth time since the war ended in late August, most recently on Nov. 26, in what Israel considered a violation of the cease-fire.

On Nov. 1, an RPG was launched from Gaza in the direction of southern Israel, which responded by closing the Kerem Shalom and Erez crossings south and north of the Gaza Strip.

Israeli warplanes have returned to the skies of the Gaza Strip, reminding the Palestinians of the war.

An al-Qassam Brigades field commander who requested anonymity told Al-Monitor, “Al-Qassam Brigades are fully ready for all confrontation possibilities with the Israeli army, and can counter any aggression against Gaza. The cease-fire agreement does not prevent the conducting of rocket tests or restoration of our military capabilities. We are fully entitled to gear up for any future confrontation.”

But Hamas’ increasing threats to return to armed confrontation have not received the full approval of its leaders. Al-Monitor met with a number of its members, who asked to remain anonymous and expressed concern about the possibility of a new confrontation for which the movement does not seem ready. The Palestinian public does not want a new war, and many regional positions are hostile to Hamas.

However, senior Hamas leader Ahmed Yousef was explicit when he said in an Oct. 1 press interview that reconstruction in Gaza requires putting an end to Israeli pretexts by suspending armed action for several years and being fully dedicated to rescuing people from the suffering that the Israeli aggression inflicted. The next stage shall not be dedicated to war, he said, but to reconstruction and rebuilding efforts.

In an interview with Al-Monitor, the undersecretary of the Ministry of Foreign Affairs in Gaza, Ghazi Hamad, ruled out a new war in Gaza, adding, “Although the faltering process of reconstruction in the Gaza Strip and the failure to accelerate it may generate angry reactions and a state of tension and congestion, this does not necessarily mean an open war.”

Hamad, a moderate Hamas figure, stressed “the need for the international community to facilitate the opening of the crossings and the reconstruction process.” He said, “There are parties out there hindering these solutions under unconvincing slogans, especially as the regional factor and tension in the countries neighboring Palestine may confer Israel an umbrella to fight the Palestinians in Gaza without them having any regional support.”