Israel’s slackening in Gaza will escalate marches of return

After Hamas rejected the transfer of a Qatari grant, protesters threatened to intensify the marches along the Gaza-Israel border to pressure Israel to abide by the truce agreement. 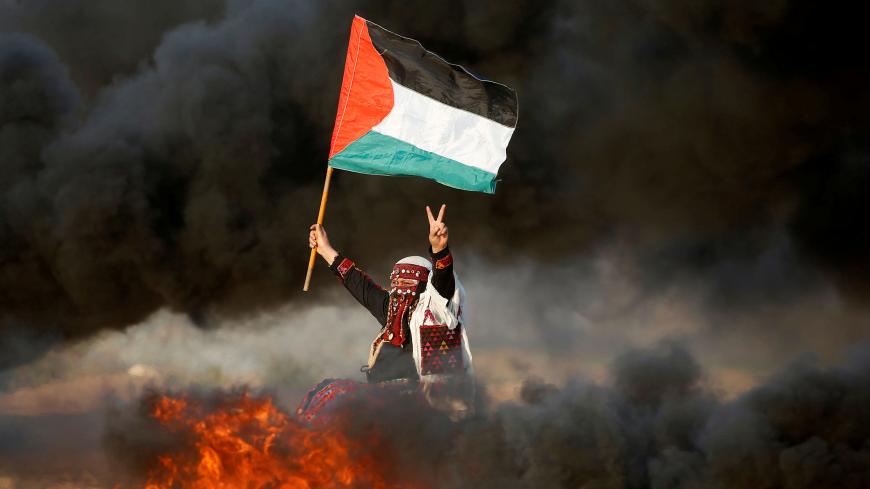 A woman waves a Palestinian flag during a protest calling for lifting the Israeli blockade on the Gaza Strip and demanding the right to return to their homeland, at the Israel-Gaza border, Sept. 28, 2018. - REUTERS/Mohammed Salem

GAZA CITY, Gaza Strip — Hamas announced Jan. 23 its rejection of the third tranche of a Qatari grant to the Gaza Strip because of “the behavior” of the Israeli government. Israel froze the transfer of the grant to Gaza twice, on Jan. 7 and Jan. 22, due to the security tensions on the frontlines between Gaza and Israel.

Hamas’ announcement portends an escalation in the frequency of the marches of return on the borders in the coming weeks.

In November 2018, Hamas spokesman Fawzi Barhoum considered the Qatari grant of $150 million a result of the weekly marches of return on the Gaza borders that started in March. Qatar’s Emir Sheikh Tamim bin Hamad Al Thani announced the grant in October to be disbursed in humanitarian aid to the Gaza Strip. The funds are intended to pay the salaries for Gaza’s civil servants and to buy fuel for Gaza’s only power plant.

Mohammed al-Emadi, head of the Qatar National Committee for the Reconstruction of Gaza and Qatari ambassador to the Palestinian territories, started transferring the funds to the Gaza Strip in November through the Israeli-controlled Erez border crossing in installments of $15 million per month. The funds are to be paid over six installments for six months. This is in addition to $60 million for fuel needed to run Gaza’s electric company over six months.

On Jan. 25, Emadi announced during a press conference in Gaza that the grant would be spent on humanitarian projects, in coordination with the United Nations, despite Hamas’ rejection. These projects include helping poor families, improving and developing electricity networks and health care. Because of the movement’s refusal to accept the funds, the money will not go to paying civil servants appointed by Hamas at this time.

Hamas spokesman in Gaza Hazem Qassem told Al-Monitor, “We refused the third tranche of the Qatari grant of $150 million because Israel stalled in allowing its transfer to the Gaza Strip, knowing it was scheduled for the beginning of the month through Qatari mediator Emadi.”

Qassem said that Israel “tried to extort Hamas by pressuring it to halt the marches of return on the eastern borders of the Gaza Strip in exchange for Israel’s allowing the entry of the Qatari funds. Hamas cannot accept this.”

He noted that the marches of return are now seeking to “force Israel to commit to the latest understandings brokered by Qatar, Egypt and the UN, since July 2018, by beefing up public mobilization and fostering peaceful protesting methods.” Qassem refused to discuss what methods he was referring to.

Since March 2018, Palestinians have been protesting on the Gaza borders with Israel. They clashed with Israeli soldiers and launched incendiary balloons toward Israeli settlements near the borders with Gaza, leading to huge fires in agricultural fields, to force Israel to lift the ongoing siege since 2006.

Qassem said that the Palestinian resistance “will not allow Israel to respond to the marches of return by shelling resistance locations. We will have the right to answer any Israeli attack, and we will not allow changing the rules of engagement in favor of Israel.”

On Jan. 22, Israel shelled Hamas positions in Gaza, killing a Palestinian and wounding four others, after an Israeli soldier was injured in an exchange of fire on the Israel-Gaza border.

“The governmental authorities in the Gaza Strip will continue to pay 40% of government employees’ salaries through local revenues until the general situation improves and the Israeli blockade is lifted," Qassem noted.

Member of the Higher National Commission for the Great Return March Talal Abu Zarifa told Al-Monitor, “Israel wants the marches of return to stop in return for allowing aid to Gaza, but this is not possible. We will continue with our marches, and we have plenty of pressure cards we can use on Israel to break the siege on Gaza.”

He said, “The understandings reached with Israel did not include a condition to halt the marches, but only to reduce the violence on the borders and stop burning tires, launching incendiary balloons and infiltrating through the border fence into Israel.”

Abu Zarifa noted that Israel is slackening in respecting its understandings, which include allowing entry of funds, halting attacks on Gaza, expanding the fishing space in the Gaza waters, allowing the entry of fuel to the only power station in Gaza, lifting the ban on commodities entering and leaving the Gaza Strip and expediting the reconstruction of the enclave.

He said that the committee is looking to increase the frequency of the marches and mobilize more people to force Israel to break the siege, adding, “Egypt is pressuring Israel to fulfill the agreed-upon understandings. If Israel does not oblige, several marches of return will take place in the coming days.” He warned that “Gaza is on the verge of blowing up in the face of Israel.”

Saleh al-Arouri, deputy head of Hamas’ political bureau, warned Jan. 25 during a TV interview on the Hamas-affiliated Al-Aqsa satellite channel that the Gaza Strip is “at the tip of the volcano” with Israel.

He said, “Israel is trying to impose field realities that foil the brokered understandings with Israel. But the Palestinian resistance does not take extortion lying down when it comes to these understandings and is willing to defend our people.”

Political analyst and former editor-in-chief of the local Felesteen newspaper Mustafa al-Sawaf told Al-Monitor, “All Palestinian parties refuse Israel's extortion attempts and their linking the Qatari grant to the calm in Gaza or to halting the marches of return. The marches will continue as long as Israel keeps reneging on its agreements with regional and international mediators.”

Sawaf said, “The marches of return will go back to their tools such as launching incendiary balloons on Israeli settlements adjacent to Gaza, burning tires near the fence and infiltrating through the security fence.”

He believes that the armed factions in Gaza “will not stand idle facing an Israeli attack, and they will respond if Israel does not lift the siege. The resistance will have different measures that Israel will not be able to bear, and the coming confrontation will be painful for everyone.”

He noted, “Israel’s ongoing slackening and evasion of its commitments to calm the situation mean that it will all blow up in Israel’s face, and everyone will have to suffer the consequences.”

Talal Okal, political analyst and writer, told Al-Monitor, “If Israel does not commit to its understandings, the great marches of return on the Gazan borders will intensify, and Israel will use excessive force. This will only worsen the situation between Gaza and Israel.”

Okal believes that Hamas’ rejection of the Qatari grant is a good call. He said that Israeli Prime Minister Benjamin Netanyahu is exploiting the issue of the Qatari funds to garner public support in the run-up to the Israeli elections. The issue of funds is also widening the Palestinian rift, after the Palestinian Authority refused their entry to the Gaza Strip, according to Okal.