Israel is reducing the number of beneficiaries of a Qatari cash grant in the Gaza Strip intended to help the needy. 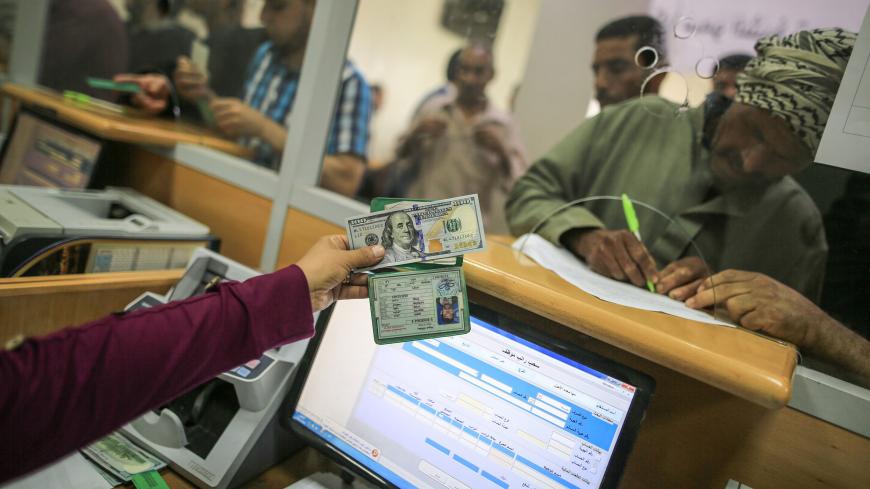 Palestinians wait to receive their share of a subsidy from by Qatar in Gaza City, Gaza Strip, June 20, 2019. - Ali Jadallah/Anadolu Agency/Getty Images

GAZA CITY, Gaza Strip — Ambassador Mohammed al-Emadi, head of the Qatar National Committee for the Reconstruction of Gaza, announced in a June 19 statement that the committee would disburse cash aid to only 60,000 poor families in the Gaza Strip as opposed to the original 108,000 families.

Emadi also said the committee decided, in collaboration with ministries and competent authorities, to allocate $6 million to help poor families and $4 million to implement other sustainable projects supervised by the committee. He gave no justification for the committee’s decision.

Emadi transferred $25 million in cash to Gaza June 16 through the Erez crossing. Out of this amount, $10 million was supposed to be distributed as a $100 cash grant to over 108,000 poor families in the Gaza Strip. Another $10 million was to be earmarked for the purchase of fuel to operate Gaza’s power plant and $5 million to be allocated to the UN Relief and Works Agency’s cash-for-work program.

The announcement that the number of beneficiaries would be reduced to 60,000 has left thousands of Palestinians in Gaza disappointed. Furthermore, the disbursement was set for June 17 but was postponed to June 20.

Palestinians questioned the real reason behind the reduction, especially in light of Gaza's deteriorating economic and humanitarian conditions, as its unemployment rate exceeded 52% in 2018.

Israel closely monitors the beneficiary list for the cash grants, sets criteria for a beneficiary's approval, and verifies recipient eligibility on a monthly basis. Recipients must not be affiliated with any armed faction in the Gaza Strip and must not participate in the March of Return protests.

Meanwhile, Israel claims that the Qatari funds allocated to poor families end up in the hands of Hamas, an allegation that Hamas refutes.

Speaking to Paltoday news website June 23, Talal Abu Zarifa, a member of the political bureau of the Democratic Front for the Liberation of Palestine, wondered why the number of beneficiaries was reduced.

Hamas spokesman Hazem Qassem told Al-Monitor that Hamas is not getting a dime of the Qatari funds entering Gaza, as Israel claims. “These funds are distributed to the specialized bodies directly through government departments and under direct Qatari supervision,” he said. Regarding the removal by Israel of families from the list of recipients, he added, “What matters to Hamas is that aid is received by its entitled beneficiaries, even if its operatives do not receive any aid.”

Qassem explained that earmarking part of the funds allocated to poor families to sustainable projects was not a unilateral decision. It was an agreement between Qatar and Gaza government agencies. “This is more useful than cash grants in helping families in need," he said. "This mechanism of disbursement will be applied to the next Qatari grant tranches when entering the Gaza Strip.”

Talal Awkal, a Palestinian political analyst, said the pretext of changing the mechanism of disbursing cash aid to poor families and reducing the number of beneficiaries in order to move toward sustainable projects is not true.

“Israel closely monitors the lists of beneficiaries of the cash grant," he told Al-Monitor. "It removed about 5,000 families from the fifth tranche of its grant disbursed in May 13 and is now removing tens of thousands from the sixth tranche, prompting the Qatari ambassador to announce a change in the disbursement mechanism.”

He added, “Israel controls all means of disbursement of funds allocated by Qatar to the Gaza Strip. The Gaza Strip is in need of development and investment projects. Reviving the Palestinian economy requires boosting the production sector instead of offering relief. But in light of the deteriorating economic situation, Gaza needs urgent relief aid.”

Awkal went on, “$10 million is not enough to cover the relief needs of a population of more than 2 million people, let alone development needs.”

He explained that Israel’s blockade on the Gaza Strip aims to force the besieged enclave into accepting anything that Israel allows to enter. “Hamas will not accept the Israeli manipulation of the truce understandings," Awkal said. "Israel wants a truce while offering minimum compromises and this cannot be accepted by any faction."

Ibrahim Madhoun, a political analyst close to Hamas, said, “Israel is in control of the disbursement of Qatari funds and sets the conditions for their entry. It does not want the disbursement of this aid to appear as a victory for the return marches and for Hamas in the truce understandings, in particular, in light of internal Israeli backbiting ahead of the forthcoming Israeli elections.”

He added that Israeli Prime Mininster Benjamin Netanyahu "does not want to pay the price of allowing the entry of these funds in the ballot boxes. This is why he always tries to show that he is in control and that Hamas will not benefit from these funds in any way whatsoever."

Madhoun noted that Israel is maneuvering to reduce and trivialize the Qatari grant and it only allowed the entry of the funds under the pressure of intermediaries and in light of the return march activities.

Refuting Israel's allegations that the Qatari grant ends up in the hands of Hamas operatives, he said that everyone knows that armed factions are part of the Palestinian people, and it is natural that aid goes to the neediest people, regardless of their partisan affiliation.

“The distribution of aid according to a partisan classification is unacceptable discrimination," Madhoun said. "There is an ongoing tug of war between the armed Palestinian factions and Israel. The former will not allow Israel to keep exploiting the Qatari grant and use it as a tool of extortion. The resistance may require increased aid, or resort to escalation.”

Allocating cash grants to finance sustainable development projects in light of the reduction in beneficiaries is in the best interest of Palestinians in Gaza, Madhoun argued. “These funds would be converted from consumption to production, which would boost the Palestinian economy and alleviate poverty and unemployment,” he said.

Of note, Qatari grant tranches are part of $150 million pledged by Qatar to alleviate the humanitarian crisis in Gaza in October via the Qatar Development Fund.