In the wake of the military escalation between Israel and the Gaza Strip, Israel has frozen the third transfer of the Qatari grant to Gaza, thus breaching understandings reached with Hamas. 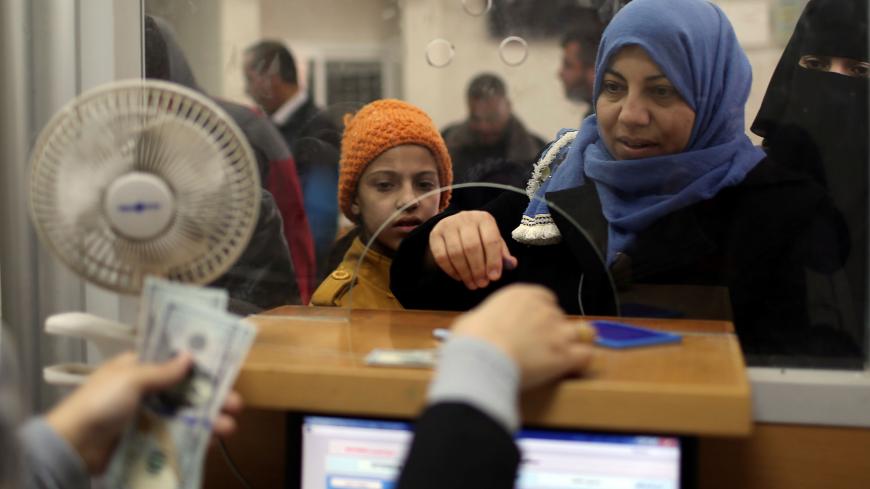 GAZA CITY, Gaza Strip — The Israeli security Cabinet decided Jan. 23 to allow the transfer of the third tranche of the Qatari grant to the Gaza Strip, after Israeli Prime Minister Benjamin Netanyahu froze the transfer twice, on Jan. 7 and Jan. 22, because of the escalating security tension on the border between Gaza and Israel.

On Jan. 23, Qatar’s Ambassador to the Palestinian territories Mohammed al-Emadi held talks with the head of Israel’s National Security Council, Meir Ben-Shabbat, in Jerusalem to convince Israel to allow the transfer.

Following the talks, the Qatari funds entered the Gaza Strip on Jan. 24.

Emadi had told Reuters Jan. 20 that Israel freezing the transfer was due to the heightened security tension on the Israel-Gaza border.

“The agreement [to transfer the funds] is subject to there not being too much violence,” Emadi said, adding that he would not carry the money himself to Gaza, like he did previously. There will be a new system that was approved by Israel, but Emadi refused to reveal further details.

Hamas threatened Jan. 18 to escalate the situation on the Israeli-Gaza border if Israel keeps violating the cease-fire, including barring the entry of the Qatari funds to the Gaza Strip.

Netanyahu is facing sharp criticism for allowing the transfer of the Qatari funds to Hamas, Israeli Chief of Staff Lt. Gen. Gadi Eizenkot warned in a press conference held during a tour in the Gaza envelope Jan. 8 against the freezing of the Qatari funds.

“The situation in the Gaza Strip is difficult and without the Qatari funds the situation is sure to explode. These funds maintain a state of balance and calm in southern Israel,” he said.

Two transfers worth $30 million have thus far been made to the Gaza Strip to cover the salaries of government employees.

An official close to Emadi told Al-Monitor on condition of anonymity, “Emadi arrived to Gaza Jan. 23 coming from Israel to meet with Hamas leaders to discuss a new mechanism for the transfer of the Qatari funds and urge the movement to calm the situation on the Israel-Gaza border.”

The source denied rumors that the mechanism consists of disbursing the Qatari grant as checks to each government employee through the Qatari National Committee for the Reconstruction of Gaza and the Qatar Charity in Gaza.

The official noted that allowing the Qatari funds into Gaza requires the approval of the Israeli authorities. These, he said, previously allowed the entry of such funds in order to prevent the deterioration of the humanitarian and economic situation in the Gaza Strip.

Since November, Emadi has been introducing $15 million a month to the Gaza Strip as part of a $150 million Qatari grant announced by the emir of Qatar last October, with the approval of the Israeli government. This comes despite the fact that the Palestinian Authority opposes such funds and accuses Qatar of financing Hamas and fueling internal divisions.

The freezing of the Qatari funds will exacerbate the economic situation in the Gaza Strip. These funds were partly filling the liquidity shortage that resulted from the national consensus government’s decision to slash 50% of the salaries of its employees in Gaza in March 2018, in a bid to deprive Hamas of that liquidity.

The salaries of the national consensus government employees amount to $50 million per month for 50,000 employees. This is the most important source of liquidity in the Gaza Strip, as these funds are usually paid in the form of taxes to the Ministry of Finance, which is run by Hamas employees. The ministry, in turn, would transfer the funds to about 40,000 employees appointed by the Hamas movement in the Gaza Strip.

The financial crisis facing the Hamas-run ministries in Gaza has worsened after the formation of the national consensus government in 2014. This government has refused to support the ministries in Gaza under the pretext that Hamas is controlling them. Also, these ministries were banned from collecting the taxes they used to collect through the Gaza crossings, which were handed over to the national consensus government in November 2017, following an agreement between Hamas and Fatah in Cairo.

Youssef al-Kayali, undersecretary of Gaza's Finance Ministry, said during a TV interview Jan. 5 that the Qatari grant covers about one-third of the salaries of Gaza employees appointed by Hamas in 2006. Their salaries are estimated at $32 million per month.

Mahmoud Mardawi, a Hamas leader in Gaza, told Al-Monitor that the Qatari ambassador has yet to officially inform Hamas about postponing his visit to Gaza.

Mardawi explained that unwritten understandings were reached in late October 2018 between Hamas and Israel under the brokerage of Qatar, Egypt and the United Nations special coordinator for the Middle East Peace Process, Nikolay Mladenov. These understandings stipulate Israel’s introduction of the Qatari funds into Gaza.

Mardawi added that the protests along the border with Israel winded down not for fear of the Israeli army threats, but to protect the lives of citizens taking part in these protests. He stressed that the protests have been peaceful since they started in March 2018.

International mediators arrived in the Gaza Strip on Jan. 9, including Jamie McGoldrick, the humanitarian coordinator for the occupied Palestinian territory and deputy special coordinator for the Middle East peace process, a European diplomatic delegation and an Egyptian delegation. It seems the talks they have been holding with Hamas have resulted in calming the situation on the ground, which paved the way for the entry of the Qatari funds to Gaza.

Mustafa al-Sawaf, a political analyst and former editor-in-chief of the local Felesteen newspaper, told Al-Monitor, “Israel will continue to delay the entry of the Qatari funds into Gaza in the future so long as Hamas and the Palestinian factions have not placed any pressure on Israel through the popular means that were used before the understandings were reached.”

In March 2018, the Palestinians started popular demonstrations along the border with Israel. They set tires on fire, fought with Israeli soldiers and launched fire balloons at Israeli fields in the Gaza envelope. This caused major fires and was aimed at pressuring Israel to lift the siege.

Talal Awkal, a political analyst and writer for Palestinian daily Al-Ayyam, concurred with Sawaf, telling Al-Monitor, “Netanyahu is under considerable internal pressure as a result of those funds. The Israeli electoral race has started and opposition parties hope they would gain credibility by opposing the understandings reached with Hamas in Gaza.”

Israel’s latest decision to allow the transfer of the Qatari grant came amid warnings against blowing up the security situation with Hamas in Gaza. Mladenov has warned against the tension Jan. 22, calling on both Hamas and Israel to practice self-restraint.