A recently delivered cash infusion from Qatar to the Gaza Strip boosted the morale of many Palestinians, and some experts predict the weekly protest marches there will continue — but peacefully, as long as Israel negotiates in good faith. 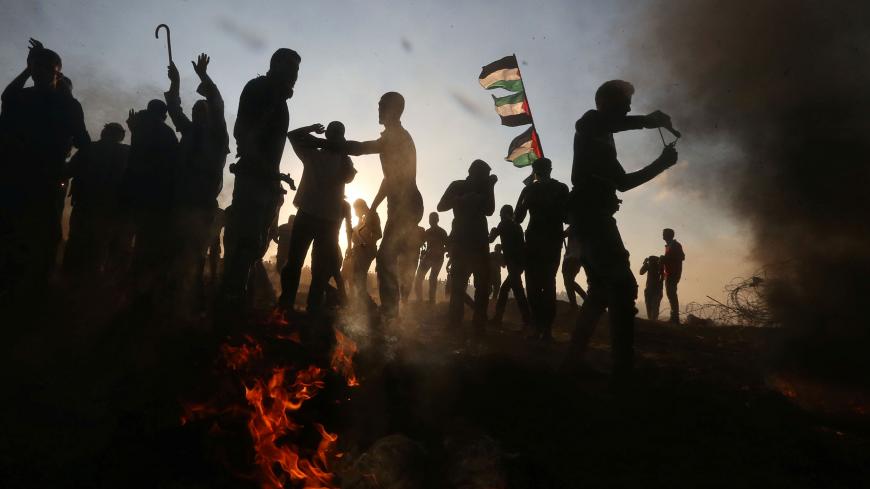 Palestinians gather at the Israel-Gaza border fence during a protest calling for lifting the Israeli blockade on the Gaza Strip and demanding the right to return to their homeland, southern Gaza Strip, Oct. 12, 2018. - REUTERS/Ibraheem Abu Mustafa

Emadi had arrived in Gaza a day earlier through the Beit Hanoun (Erez) crossing, bringing suitcases stuffed with cash — $15 million — as part of a Qatari grant to help alleviate the dire economic situation facing residents. This grant aims to pay the wages of civil servants in the Hamas government in the Gaza Strip, as well as to develop employment projects for college graduates. It is just one of many grants planned. More aid is being provided for energy-related projects. Qatari fuel arrived Nov. 10 to the Gaza Electricity Distribution Company as part of efforts to resolve the power crisis plaguing Gaza.

Israel allowed Qatar to deliver the funds to the Gaza Strip after several discussions among Arab and regional parties. The Higher National Commission for the Great Return March and Breaking the Siege stated Nov. 9 that return marches are ongoing thanks to the Qatari grant. Israel, however, believes the money is supposed to help ease tensions with Gaza.

The Great Return March protests began March 30 near the border fence between Israel and the Gaza Strip, and aim to end the siege Israel has imposed since 2007 and fulfill the right of Palestinian refugees to return to their pre-1948 homeland. These marches have resulted in violence and a tense political situation between Palestinians and Israelis.

Emadi said during his visit that his country will continue to pay the salaries of Gaza’s civil employees for six months, giving monthly payments to poor families from the $15 million grant, in addition to $10 million for fuel. He also confirmed ongoing talks with Israel in regard to the electricity problem, the 161-kilovolt transmission line project to be established from Israel to Gaza and the maritime route to be created between Gaza and Cyprus.

Some angry demonstrators pelted stones at Emadi's convoy during his stop at the camp, objecting to his presence in the Gaza Strip. Some consider the money he provided as a payoff to deter the resistance. The Palestinian Authority (PA) in the West Bank opposed the payment, saying the money will just allow Hamas to consolidate control over the area.

An Egyptian security delegation had visited the return camps Nov. 2 to encourage protesters to conduct peaceful marches rather than resorting to popular resistance methods used in past months, such as burning tires, launching incendiary kites and cutting through the barbed wire installed by Israel at the border.

Meanwhile, talks between the Egyptian delegation and Hamas continue, aiming to reach a long-term truce with Israel that includes easing the siege on the Gaza Strip in return for halting the Palestinian demonstrations near the border fence.

Unrelated to the weekly marches, a ferocious and deadly battle arose Nov. 12 between Israel and Hamas. On Nov. 13, a cease-fire was reached under Egyptian and international mediation.

However, on Nov. 15, the Great Return March commission called on Gazans to participate in a mass protest under the slogan “Normalization Is Betrayal" to show support for the Palestinian resistance, which believes it emerged victorious from the Nov. 12-13 battle.

Commission member Talal Abu Zarifa told Al-Monitor that the visits of Emadi and the Egyptian delegation to the camp sent a powerful message of solidarity with the demonstrators. According to him, the visits will help support the peaceful nature of the return marches and disprove any Israeli claims of the continued use of popular resistance methods by demonstrators. He said the Egyptian delegation conveyed a positive image to the Israeli side about the marches and the demonstrators there.

Abu Zarifa also stressed that the political efforts led by Egypt, Qatar and the United Nations will help calm the violence and lift the siege. He pointed out, however, that the marches will not stop before achieving their goals, namely lifting the siege completely and affirming the right of refugees to return to their lands. He noted that Israel has responded to Palestinian demands only because of the pressure of the Great Return March protests.

Ibrahim al-Madhoun, an expert on Palestinian affairs and director of the Youth Media Center, Hamas’ media wing, told Al-Monitor that Emadi’s visit aimed to examine the situation on the ground and monitor the marches, in light of the agreements between the Palestinian and the Israeli sides under the auspices of the UN and Egypt and with Qatari efforts. He noted that Qatar is trying to strengthen its role in the Palestinian cause, saying, “Emadi’s visit may have been linked to his long-term political ambition, in addition to his desire to thank the Palestinian people.”

Madhoun expects a noticeable breakthrough for the Palestinians in the Gaza Strip if current diplomatic efforts continue and a long-term truce between Hamas and Israel is reached. He added that people have already started feeling this positive change thanks to the Qatari grant.

“All sectors are yearning for projects to boost the economy in Gaza," he said. Like Abu Zarifa, Madhoun expects the return marches to continue over the next two months but at a reduced level, to give way to the cease-fire reached Nov. 13. He pointed out that any violation from either side — Hamas or Israel — will be directly reflected in march activities.

Hamza Abu Shanab, a political analyst close to Hamas, denied in an interview with Al-Monitor any political significance to Emadi's visit to the return camp. Any decision to stop or continue the marches will come from the high commission — in other words, from Palestinians, not Qataris. He further stressed that the visit aimed to assess the situation on the ground.

When asked about the frequency of future marches, he answered, “The marches were peaceful when they started out, but they evolved into violent ones with the use of popular resistance methods when the Palestinian demands were ignored. I expect them to return to their initial peaceful form, thanks to the understandings reached.”

He added, “The marches will continue to be a means of pressure on Israel and one of the tools of the Palestinian struggle, but will not preserve the same momentum and mobilization that existed previously, as they may turn into folklore and be held monthly or annually.”

Abu Shanab said solving Gaza’s economic situation is not only linked to the Qatari funds and fuel; Palestinian President Mahmoud Abbas should also lift the punitive measures he started imposing on Gaza in April 2017, mainly slashing the salaries of PA employees in Gaza. He should also refrain from imposing new sanctions, as he has threatened to do if Israel agrees to allow more aid into the Gaza Strip.

When talking about the next phase for Palestinians, Abu Shanab said that at the domestic level, there will be no actual developments in the effort to reconcile the West Bank and Gaza Strip territories because Abbas is sticking to his program — a policy opposed by all factions of the Palestinian resistance in the Gaza Strip. As for the Palestinian-Israeli negotiations, he said, “Efforts and understandings will continue to achieve a long-term truce between the two sides.”