The thwarted terror attacks of recent days indicate that Hamas' leadership is losing control over some of its operatives. 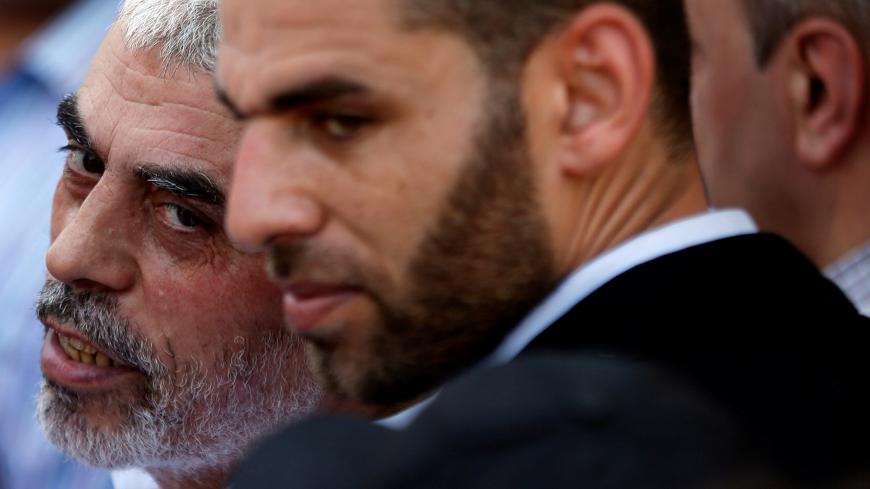 Hamas Gaza Chief Yahya Sinwar looks on as he takes part in a protest against Bahrain's workshop for the US Middle East peace plan, Gaza City, Gaza, June 26, 2019. - REUTERS/Mohammed Salem

Hamas has denied responsibility for the five Palestinian terrorists who tried to infiltrate Israel last week on two separate occasions, describing them in media briefings as “rogue” figures. Still, it seems that the more accurate way to define these perpetrators would be "rebels."

Both incidents appear to signal the first signs of a clear, significant revolt by members of the organization’s armed wing dissatisfied with their leadership’s policy of restraint vis-a-vis Israel.

The most serious incident occurred in the early hours of Aug. 10, when four terrorists armed with Kalashnikov rifles, hand grenades and rocket-propelled grenade (RPG) launchers approached the southern section of the Gaza Strip’s fence with Israel. One cut through the fence, but Israeli army lookouts spotted the four and a Golani Brigade force shot them dead. A military spokesperson claimed the force’s speedy, effective reaction had foiled a major terrorist attack within Israel. According to reports from Gaza, the four had been ousted from Hamas because they had “crossed the line” under the radical influence of Salafist organizations in the enclave.

The next day, another Palestinian, Marwan Nasser, 26, from the Gaza town of Beit Hanoun reached the northern section of the fence, firing at Israeli troops who fired back and killed him. Unlike the four would-be infiltrators the day before, Nasser was not a disgraced Hamas operative. He was a member of the organization’s elite Nuhba unit, trained to infiltrate Israel through underground tunnels. He was dressed in Hamas fatigues, carried his personal weapon and was buried in his uniform as a Hamas member.

Hamas did not accept responsibility for his attempted terror attack, describing him (though in private talks) as a “rogue” fighter who had violated the organization’s orders. Hamas said he was motivated by his father’s killing in a clash with Israeli troops during the second intifada.

On Aug. 1, a member of Hamas' Restraining Force, Hani Abu-Salah, injured an Israeli officer and two soldiers after crossing the border and before being shot dead. In this case, too, Hamas claimed he held a personal grudge against Israel over the killing of his brother Fadi Abu Salah, a double-leg amputee and member of the Islamic Jihad, by Israeli soldiers during a May 2018 border protest.

Although, in accordance with Israeli policy, Prime Minister Benjamin Netanyahu said Hamas bears responsibility for the attempted terrorist attacks, the absence of a military response proves that Israeli officials view the egregious events as “a malfunction” within Hamas.

Hamas also avoided retaliatory action against Salafist groups in Gaza. In the past, every incident involving Gaza Salafists seeking to challenge and embarrass Hamas resulted in harsh retaliation. In 2009, after the leader of the Salafist movement, Abdul-Latif Moussa, declared Gaza an Islamist emirate and swore allegiance to al-Qaeda, members of Hamas Izz ad-Din al-Qassem Brigades gunned him down inside a Rafah mosque and killed or arrested dozens of his people. In August 2017, a Salafi terrorist carried out a suicide bombing on the Rafah border crossing with Egypt, killing a Hamas guard. Hamas immediately arrested dozens of Salafists throughout the Strip and demolished buildings they used.

This time, the attempt by four Hamas renegades to join a Salafist organization in order to carry out a terror attack on the Israeli border and get Hamas into trouble has not resulted in any reaction — so far. Hamas will surely deal with the Salafists another time.

The reason for its restraint is a climate of dissatisfaction on the part of some members of the armed wing — even if they are of marginal importance — over Hamas policy on Israel. Arrests of Salafists, armed clashes with them or demolition of their buildings and mosques could prompt harsh criticism of the organization. It would bolster claims that Hamas had abandoned the armed resistance against Israel and was attacking anyone seeking to carry out what was once the movement’s credo, having sold its soul in return for convenience and a continued hold on power.

“Hamas is undoubtedly in a bind,” an Israeli security source confirms to Al-Monitor on condition of anonymity. On the one hand, the group wants to finalize lengthy talks on a long-term cease-fire deal with Israel in return for an easing of Israel’s blockade of Gaza, which would, in turn, make life easier for its 2 million residents and help Hamas retain power. On the other hand, Hamas is under domestic criticism from its own members indoctrinated with the zeal to fight Israel and the “Zionists” to the bitter end. Hamas leadership is having a hard time explaining this apparent contradiction. According to the source, Hamas is nonetheless not under any real threat and will know how to deal with the problem before it spreads.

These cracks within Hamas, however, are not limited to the military wing. The political leadership, with its pragmatic elements and hawkish ones, is also divided over efforts to achieve an arrangement with Israel and over the organization’s future direction as Gaza’s ruler.

The organization’s head in Gaza, Yahya Sinwar, leads those advocating a pragmatic, restrained approach. His allies — among them senior officials such as Ghazi Hamad — view an accommodation with Israel as the best default option. On the other hand, top officials such as Mahmoud al-Zahar, Khalil al-Haya (whose son was killed in the 2014 war with Israel) and deputy head of the political department Saleh al-Arouri believe Hamas must prove that it has not abandoned the armed struggle and should strive for a rapprochement with Iran to the extent possible. However, even the most junior Hamas operative understands that a rapprochement with Iran comes at a cost. There is no middle ground; it is either jihad or an arrangement with Israel. This is the heart of the dissent dividing the organization’s military and political departments, reflected in the burgeoning signs of revolt along the border with Israel.

The cracks within the military wing and the impact of radical groups on its members trouble Sinwar and could undermine his plan to reach an arrangement with Israel — a plan he is pursuing despite significant domestic opposition that regards it as surrender. Thus, Sinwar has no choice but to carry out a quick, thorough housecleaning throughout the Hamas ranks.

According to the Israeli security source, Hamas will be unable to sustain a long-term arrangement with Israel, which would entail discipline and responsibility. Any violation of the deal and any terror attack or attempted attack could walk back the relaxation of Israel’s restrictions such as permission to bring certain raw materials into Gaza and allow Gaza residents to work in Israel, development of projects, and improvement of the water and power infrastructure.

This is undoubtedly another significant crossroads on Hamas’ twisting road as it tries to strike a balance between its identity as an armed Islamist resistance movement and its desire to adapt to changing circumstances in order to survive.