Gaza’s Islamic Jihad openly at the service of Iran

Hamas no longer tries to conceal the growing involvement of Iran in Gaza through its proxy Islamic Jihad. 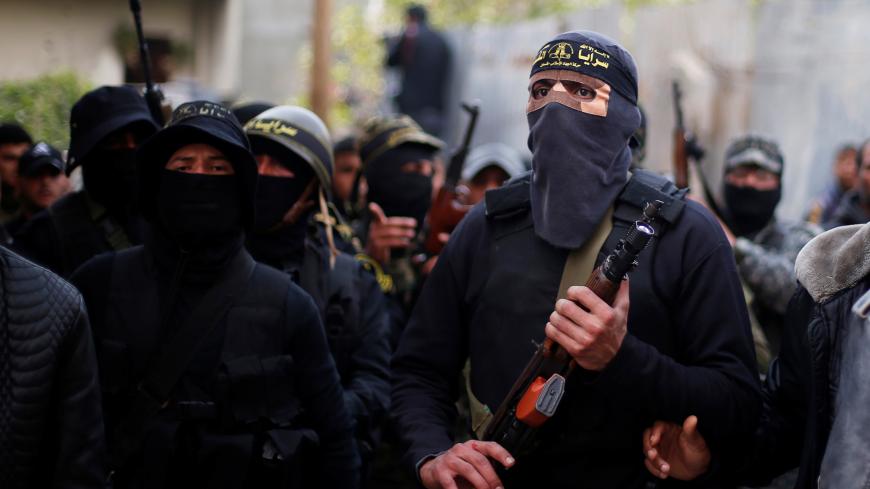 Israel’s Coordinator of Government Activities in the Territories Maj. Gen. Kamil Abu-Rukon appealed to residents of the Gaza Strip through his Arabic-language “Al-Munaseq” Facebook page Aug. 26, explaining why Prime Minister Benjamin Netanyahu had ordered Israeli fuel supplies to the enclave cut by half. “Hostile warmongers, near and far, are dragging you down the path of violence and a loss of stability,” he warned. Abu-Rukon then listed the names of those seeking to foment war when it comes to Gaza: the Islamic Jihad and Iran. He did not name Hamas, but two photos were appended to the post — one showing Islamic Jihad leader Ziyad al-Nakhaleh embracing the head of the Iranian Supreme Security Council, Rear Adm. Ali Shamkhani, at a Dec. 30, 2018 meeting in Tehran. The other showed Hamas leader in Gaza Yahya Sinwar covering his eyes with his hands.

The message was clear: The Islamic Jihad is acting on Iranian orders while Hamas is closing its eyes and allowing these “hostile elements” to drag Gaza into war. “Apparently, the factions in Gaza favor the interests of Iran over their own citizens,” Abu-Rukon added.

Israel’s decision to slash the amount of fuel it allows into the enclave followed the Aug. 25 firing of three rockets toward the Gaza border town of Sderot during the Live Sderot concert that drew a crowd of thousands. The blaring of sirens warning of incoming rockets set off panic among the audience that had come to celebrate the last musical event of the summer, with people scattering every which way to seek shelter. Many simply lay flat on the grass, covering their heads with their hands. Although Sderot is a frequent target of Gaza rocket fire, it has never experienced such an attack during a mass public gathering.

Israel is holding the Islamic Jihad responsible for the rocket attack, which was launched in retaliation for recent activity by the Israel Defense Forces (IDF) against Iranian targets, accusing the Islamic Jihad of trying to fuel further Israel’s already highly charged northern front. On the night of Aug. 24, Israeli fighter jets struck Iranian targets in Syria. Israel generally does not admit or deny its cross-border military strikes in the north, but in an unusual move, the IDF admitted attacking a unit of Al-Quds, an arm of Iran’s Revolutionary Guards in Syria that the IDF accused of planning “killer drone attacks” on Israel. At the same time, two drones crashed into Beirut’s predominantly Shiite Dahiyeh neighborhood. Hezbollah Secretary-General Hassan Nasrallah claimed they were explosives-laden Israeli drones targeting his organization, which, like the Islamic Jihad, enjoys Iranian patronage.

As has been the case with its retaliation for other recent attacks from Gaza against Israel, the Israeli response to the three rockets was relatively low-key. The reduced fuel measure was designed to send Hamas a message — put your house in order before you become a target, too. In light of the criticism directed at Sinwar in Gaza for the policy of restraint he is leading vis-a-vis Israel, Hamas is having a hard time reining in the Islamic Jihad and those it has dubbed “rogue” or “young rebels” carrying out attacks against Israel in recent weeks.

In its response — bombing several targets of the Hamas military wing without inflicting casualties or significant damage — Israel sought to avoid an escalation with Gaza.

And herein lies the dilemma of the organization ruling Gaza.

Hamas and Iran appear to be furthering their rapprochement. The deputy head of the movement’s political bureau, Saleh al-Arouri, met July 22 in Tehran with Iran’s Supreme Leader Ayatollah Ali Khamenei and declared, “Hamas is on Iran’s front line of defense.” About a week later, Iranian diplomat Amir Moussawi said the alliance between Tehran and Hamas was by way of “establishing a united military front from Tehran all the way to Gaza.”

Following Arouri’s dramatic statement, I wrote here on Al-Monitor that the rapprochement with Iran and Arouri’s pledge to defend Iran had sounded the death knell for ongoing efforts to forge a long-term Hamas-Israel cease-fire arrangement. Israel cannot ease its siege of Gaza and push forward with long-term arrangements with Hamas while allowing Iran to control the Strip through its Islamic Jihad proxy or other pro-Iranian groups within Hamas.

Following Arouri’s meeting with Khamenei, Israeli intelligence officials predicted that Hamas and the Islamic Jihad would try to force Israel to deploy additional armed forces and defense systems to the Gaza border in order to draw them away from Israel’s northern front. A July 31 Haaretz report quoted a senior Israeli defense official as saying Iran had stepped up its involvement in Gaza to turn Hamas into an operational arm of Tehran and views the strengthening of Hamas as a military force as an important part of its strategy against Israel.

For now, only part of these assessments has been borne out. Hamas has not declared war on Israel, yet, but it is giving the Islamic Jihad free rein. Or as Abu-Rukon hinted in posting Sinwar’s photo — Hamas is turning a blind eye. Israeli defense officials will not say so publicly, but one of the prevailing assessments links the uptick in Iran’s involvement in the region (in Syria, Lebanon and the Gaza Strip) to the US withdrawal from the nuclear deal with Iran and to the sanctions President Donald Trump imposed on the regime in Tehran.

Indeed, while the agreement was in force, Iran did not suspend its engagement along the various fronts with Israel, but there was a concerted effort to blur its fingerprints, especially in Gaza. Now that Iran does not believe it has anything to lose, and it even wants to display its capacities and influence, it is not attempting to hide. Arouri embraces Khamenei and commits to mobilizing as a loyal soldier in the revolutionary army, and the Islamic Jihad sends rockets into Israel to retaliate for Israeli attacks on Iranian targets in Syria.

And Sinwar? He finds himself torn between his desire to keep pushing ahead with the Egyptian-mediated long-term arrangement with Israel and to hope for the best — and his wish to maintain good relations with his organization’s only ally, Iran, including the pro-Iranian camp within Hamas. His is no simple task, and it may well be impossible.