Israel, Egypt holding Hamas accountable for all attacks from Gaza; the wisdom of Sultan Qaboos. 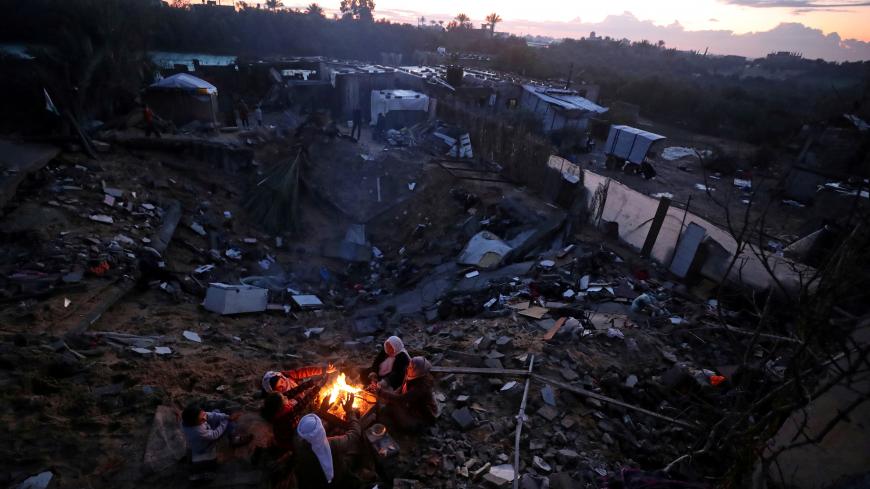 Members of a Palestinian family sit around a fire to warm themselves at the site of their destroyed house, on a rainy day in the southern Gaza Strip, Jan. 10, 2020. - REUTERS/Mohammed Salem

Rocket attacks from Gaza shattered a fragile truce in the region on Jan. 15, prompting retaliatory strikes by the Israeli air force.

No matter that the rocket attacks may have been launched by "rogue Islamic Jihad militants," as Shlomi Eldar reports. Israel is holding Hamas accountable either for having a direct role in the attacks or just for letting them happen.

Hamas is playing with fire and risking its ties with Egypt, perhaps at the bidding of Iran in the wake of the US killing of Islamic Revolutionary Guard Corps Quds Force commander Maj. Gen. Qasem Soleimani on Jan. 3.

Hamas must also contend with the more confrontational and aggressive tactics of Islamic Jihad, which has even closer ties to Iran and relishes its role as a spoiler.

And this all takes place in the context of Israel Prime Minister Benjamin Netanyahu’s bid to remain prime minister in the upcoming March 2 elections.

The Israel Defense Forces (IDF) responded with air attacks on Hamas and Islamic Jihad positions the next day. While Hamas suggested the rocket attacks were the work of Islamic Jihad, Israel’s response, through both its strikes in Gaza and Egyptian intermediaries, made clear that if more attacks happen, Hamas, as the ruling authority in Gaza, will pay the price.

Israel, Egypt, Hamas thought they had a deal …

The Christmas escalation had led to a cease-fire that seemed to work for Israel, Hamas and Egypt. Bibi could claim Israel’s tough response facilitated calm. Hamas and other Palestinian factions agreed to halt the weekly Great March of Return protests on the Israel-Gaza border for three months (until March 2020). In response, “Israel decided to import strawberries, tomatoes and eggplant from the Gaza Strip to support its local markets for the first time since a ban imposed several years ago,” Rasha Abou Jalal reports. “It decided at the same time to introduce transportation buses and fishing boats to Gaza, in addition to rubber tires, which had been banned since April 2018.”

The Israeli concessions gave some reprieve to Gazans living under oppressive military and economic conditions and some breathing room for Hamas to weigh its next moves.

… and then Haniyeh went to Soleimani’s funeral …

The US killing of Soleimani ended hope of a reprieve.

Last week we noted that Hamas leader Ismail Haniyeh and Islamic Jihad Secretary-General Ziad al-Nakhaleh led their respective delegations to Soleimani's funeral in Tehran on Jan. 6. Haniyeh was the only non-Iranian to speak at the funeral. Soleimani’s daughter Zeinab mentioned Haniyeh as among those who will avenge her father’s death, as Adnan Abu Amer writes.

Hamas has been rebuilding ties with Iran since the group broke with Syrian President Bashar Al-Assad, a close Iranian ally, in 2011. Hamas and Islamic Jihad count on Iranian financial and military support.

“Hamas owes a debt to Iran,” writes Shlomi Eldar, who describes its conundrum: “If a violent confrontation erupts between Iran and the United States and Hamas sits on the fence instead of fulfilling [Hamas leader Saleh Al] Arouri’s promise to function as Iran’s first line of defense, the movement can forget about Iranian military aid. On the other hand, if Hamas keeps its promise to Khamenei, it would create a front against Egypt and end any chances for an arrangement with Israel. And should Hamas stop reining in Islamic Jihad, the group may pull Hamas into a dangerous military adventure leading to war with Israel.”

We wrote back in July about the shadow war between Egypt and Iran in Gaza. Those tensions may be coming more and more out of the shadows.

Egypt’s leaders expect Hamas not to get drawn into Iranian intrigues and warned Haniyeh not to go to Soleimani’s funeral. Cairo had blocked Haniyeh from traveling from Gaza since 2017 but made an exception this month for a regional tour that included Qatar, Turkey and Malaysia. It wasn’t supposed to include Iran, as Entsar Abu Jahal reports.

Sensing an Iranian hand behind the Jan. 15 attack, Egypt this time refused to mediate between Hamas and Israel. “Egypt was so furious that it immediately turned off its supply of cooking gas for the Strip’s 2 million residents to signal the heads of the organization that Haniyeh’s provocative step would not go unpunished,” Shlomi Eldar reports. “Over the past week, the Egyptians have clamped down on the movement of goods and people through its Rafah border crossing with Gaza. No one knows what might happen once Haniyeh asks to return to the Strip and whether Egypt will let him through.”

Despite Egypt’s discontent with Haniyeh, his leadership of Hamas seems unchallenged, at least for now. Khaled Meshaal, who led the Hamas politburo from 1996-2017 and is known for his close ties with Qatar and Turkey, is rumored to be weighing a return to his previous role or even a run for Palestinian Authority president, Adnan Abu Amer reports. Meshaal was the one who broke ties with Syria, and by extension Iran — ties Haniyeh has sought to repair. Given his strong relations with Qatar and Turkey, Meshaal’s return would likely not be welcomed in Cairo. Egypt would prefer a return of former Gaza-based Fatah leader Mohammed Dahlan, who would need to overcome the enmity of both Palestinian President Mahmoud Abbas and Hamas, as Daoud Kuttab reports on the contender to succeed Abbas.

And then there is the Israeli election

The tensions in Gaza can’t be separated from the Israeli elections. There is buzz in Israel that the Trump administration may release its long-awaited peace plan before March 2. If so, that could work to Bibi’s advantage. Ben Caspit writes, “The publication of the plan would divert Israeli public attention toward domains that Netanyahu masters well and in which he faces practically no criticism: A diplomatic plan from the White House, the closeness of Netanyahu to Trump and perhaps a few bonuses and goodies thrown into the deal, such as US approval for Israeli annexation of the Jordan Valley if Israel responds to the blueprint in the affirmative.”

Akiva Eldar argues that Netanyahu’s role as “Mr. Security” may be overhyped, considering that the situation seems to have worsened as a result of Bibi’s lobbying US President Donald Trump to withdraw from the Joint Comprehensive Plan of Action, or the Iran nuclear deal.

Hamas is getting pressed from all sides, including, and most importantly, by Gazans. The only "wins" it can achieve in governance is when there is a cease-fire that allows some economic respite for Gaza’s citizens, and that requires negotiated calm with Israel via Egypt. But Hamas needs Iran, and Islamic Jihad is there to press the action. The Trump peace plan, if and when it is offered, will, at least in the short term, present an entirely new dynamic to the regional picture. And both Iran and Hamas will be on the outside looking in.

Al-Monitor notes the passing of Sultan Qaboos of Oman, a US ally whose inspired leadership was a valued and essential component to diplomacy in the region.

Former Deputy Secretary of State William Burns, in his book The Back Channel, referred to Sultan Qaboos as “full of wise insights and quiet dignity.”

Despite speculation about a potentially rocky transfer of power, “The transition to the new sultan, Haitham bin Tariq Al Said, a first cousin of Qaboos, proceeded rapidly and smoothly, just as Omani officials had quietly predicted it would,” writes Kristian Coates Ulrichsen.