The escalation of tensions between Iran and the United States is threatening to force Hamas to take action in support of Tehran, endangering the chances for an arrangement with Israel. 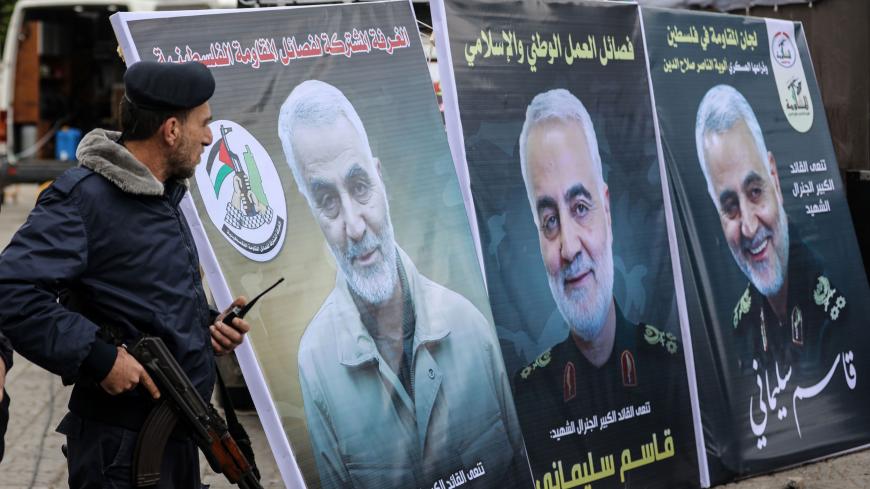 Palestinian factions in the Gaza Strip erected their own mourning tent during the Jan. 4 funeral march for assassinated Quds Force head Qasem Soleimani. Maps of the United States and Israel were placed on the floor at the entrance to the tent for visitors to step on as they entered. Hamas and Islamic Jihad, which viewed Soleimani as a leader who encouraged, supported and directed them in their struggle against the “Zionist enemy,” published mourning announcements emphasizing his central role in advancing the Palestinian resistance.

Israel warned Hamas and Islamic Jihad via Egypt not attack Israel and so far there have been no violent reactions to Soleimani's elimination.

Hezbollah Secretary-General Hassan Nasrallah, supported by Iran and viewed as Soleimani’s protege, delivered a speech at the funeral held in Beirut Jan. 5. Nasrallah said that Soleimani’s death marked the “beginning of a new phase in the entire region” and added that Israel did not dare to kill Soleimani on its own, so it turned to the United States.

It is reasonable to assume that Nasrallah actually believes this baseless argument, which also seems to have been adopted by Palestinian organizations. These groups often attribute unrealistic powers to Israel in influencing the United States. One thing is true: Nasrallah was correct that the region is entering a new stage. Should US-Iranian hostility escalate into a military conflict, Hamas’ satellite organizations will not be able to make do with announcements of support. The Palestinian resistance, for example, is indebted to Iran, which helped Hamas and Islamic Jihad become armed and well-trained organizations and changed the equation in their ability to threaten Israel.

Hamas faces a dilemma in light of the group’s efforts to inch closer to Egypt. Hamas realizes that the organization cannot economically and militarily survive the two-pronged siege on Gaza by Israel from the north and Egypt to the south. On the other hand, Hamas has been trying to rehabilitate its relations with Iran over the last year. Members of the organization remember the tremendous damage caused by Khaled Meshaal, the former head of Hamas’ political bureau. Meshaal became persona non grata in Tehran after he made the mistake of taking sides in the Syrian civil war against Syrian President Bashar al-Assad. Meshaal then emptied the movement’s offices in Damascus and went to Qatar, where he did not get as much as he wanted. He did not receive a supply of advanced military equipment, only humanitarian aid for the Strip with Israel’s agreement. The Iranians took offense, Meshaal was forced to resign and Hamas' new leadership split into one chief appointed to rehabilitate relations with Tehran and a second to maintain good ties with Egypt.

Saleh al-Arouri was charged with the first task, appointed in 2017 as deputy head of the political bureau. He immediately embarked on a reconciliation campaign and was successful. From Turkey (and afterward Beirut), he rehabilitated ties with Iran and succeeded in organizing a get-together of Hamas higher-ups with Iran’s Supreme Leader Ayatollah Ali Khamenei in July 2019. The meeting ended with a public statement on the reinstating of diplomatic and political relations as well as Tehran’s promise to increase military assistance to the movement. Khamenei told the Hamas delegation, “Victory over the enemy will only be achieved through struggle and resistance," and "Only a few years ago the Palestinians fought the Zionist enemy with stones, and today they are equipped with precise missiles.”

Arouri, seeming to understand the give-and-take involved, said clearly, “Hamas will be Iran’s first line of defense in the shadow of the recent aggression of the West. Any enemy of Iran is an enemy of Palestine and of the opposition axis.”

The Hamas higher-ups tasked with retaining good relations with Egypt are the movement's leader in Gaza, Yahya Sinwar, and first political bureau head Mousa Abu Marzouk. Marzouk lives in Cairo. As for Hamas leader Ismail Haniyeh, he has tried over the years to anger neither Cairo nor Tehran. But when Haniyeh recently asked permission to leave Gaza, the Egyptians agreed only after he promised not to visit Tehran or Ankara.

Now, after Soleimani’s elimination and the saber-rattling by both Washington and Tehran, the Hamas leadership can no longer play a double game. Haniyeh said on his consolation visit to Iran on Jan. 6, “We have come here today to express our sincere and genuine feelings for a dear brother and martyred commander.” It is not clear if Egypt was informed about the visit ahead of time or how it will respond.

Hamas owes a debt to Iran. If a violent confrontation erupts between Iran and the United States and Hamas sits on the fence instead of fulfilling Arouri’s promise to function as Iran’s first line of defense, the movement can forget about Iranian military aid. On the other hand, if Hamas keeps its promise to Khamenei, it would create a front against Egypt and end any chances for an arrangement with Israel. And should Hamas stop reining in Islamic Jihad, the group may pull Hamas into a dangerous military adventure leading to war with Israel.

Meanwhile, the Hamas leadership still has time to play the game and lower Iran’s expectations of retribution by Hamas. Hamas' mourning announcement denounced the United States and thanked Soleimani for his contributions to Hamas’ military might, but did not promise vengeance for the killing. The mourning tent in Gaza was for all the Gaza organizations, but unlike in Beirut, there was no funeral march.

How long can this game play out? An Israeli security source told Al-Monitor that everything depends on the escalation. Should the United States really attack 52 Iranian targets as President Donald Trump promised, Hamas will not be able to remain on the fence. Even if Hamas tries to use Islamic Jihad as its cover or proxy, no one will swallow it and the chances for an arrangement with Israel will be over.

It's a true dilemma for Sinwar and Haniyeh.