Hamas' agreement to refrain from attacks, for now, puts Gaza on the back burner for Israeli elections. 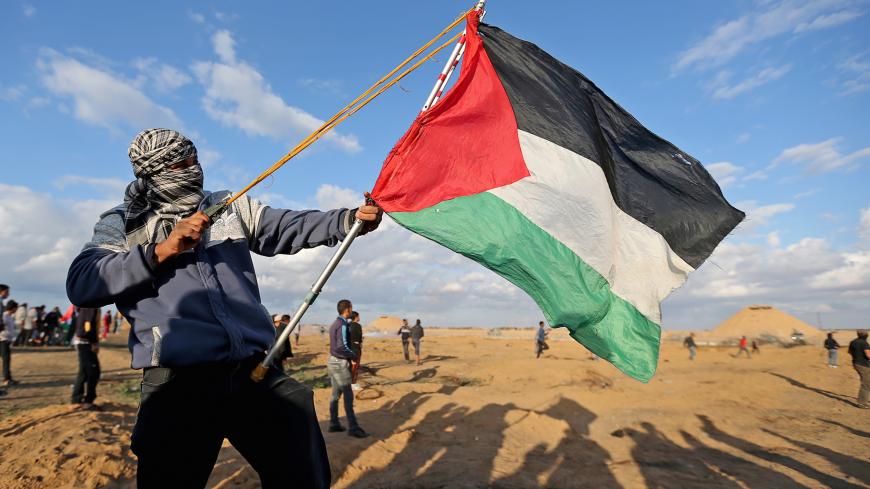 A Palestinian demonstrator uses a sling during an anti-Israel protest at the Israel-Gaza border fence, in the southern Gaza Strip, Dec. 6, 2019. - REUTERS/Ibraheem Abu Mustafa

Threat of ‘devastating action’ pays off

Israeli Prime Minister Benjamin Netanyahu has tried to keep tensions with Hamas out of upcoming national elections, with a vote coming March 2. Egypt has helped him to do that.

It wasn’t easy. Tensions have been rising due to a wave of attacks from Hamas-led Gaza into Israel. The conventional wisdom in Israel is that a military response against Palestinian territory would be risky and uncertain, and not necessarily to Netanyahu’s electoral advantage.

These are not simple military operations; they are a kind of black hole, militarily and politically.

But the increased rocket attacks from Gaza into Israel, as well as the use of balloons carrying explosive devices, pushed the prime minister to the breaking point, elections or not, and on Feb. 9 he threatened "devastating action" against Hamas and Islamic Jihad, the latter a smaller and more radical group, if the attacks didn’t stop.

Now, thanks to Egyptian mediation, with an assist from the United Nations, a new cease-fire between Israel and Hamas may get Netanyahu and Israel through the March 2 elections. Netanyahu stands to benefit from the calm, while Iran, which has been backing both Hamas and Islamic Jihad in Gaza, looks to be a loser.

It’s no surprise that Egyptian mediation moved the conflict over Gaza from front to back burner.

A cease-fire arrangement between Israel and Hamas in December was already fraying. That accord carried big economic incentives. Hamas had agreed to suspended weekly "Great March of Return" protests on the Israel-Gaza border through March in return for a loosening of trade and import restrictions on agricultural and other goods, as we explained here.

But that deal, in which Egypt didn’t play a role, couldn’t hold. When rockets were fired into Israel from Gaza on Jan. 15, Egypt, sensing an Iranian hand (see below), stayed out of the fray again while clamping down on the movement of goods and people into Gaza through the Rafah border, as we reported here.

But with the conflict escalating in recent weeks, Egypt reengaged in an impactful way. Gen. Ayman Badia, deputy head of Egyptian intelligence and Ahmad Abu Halaq, who manages the Palestinian account, undertook a bit of shuttle diplomacy between Israel and Gaza Feb. 9-10. The Egyptian delegation visit was the first to Gaza since Sept. 8, 2019, although there were, of course, regular calls and conversation, as Rasha Abou Jalal reports.

As Shlomi Eldar explains, Badia told Hamas leaders in Gaza Feb. 10 that what Bibi said publicly about "devastating action" was not just fodder for his reelection campaign. Hamas indeed risked a major hit if it kept up the balloon and rocket attacks, including potential targeting of Hamas and Islamic Jihad leaders. Hamas agreed to resume the cease-fire, in return for loosening restrictions on business travel and fishing rights, according to the Times of Israel.

Part of Egypt’s motivation may have been to back-foot Iran. Egypt, which is the transit point for Hamas officials coming and going from Gaza, has repeatedly warned Hamas political bureau chief Ismail Haniyeh not to go to Iran, which provides financial support to the Hamas regime. But not only did Haniyeh go to Iran, he was the only non-Iranian speaker at the funeral of Islamic Revolutionary Guard Quds Force commander Qasem Soleimani, who was killed by a US drone strike in Iraq Jan. 3.

Egypt, which has been engaged in a "shadow war" against Iran in Gaza, stood back when it sensed that Hamas, or perhaps Islamic Jihad, had triggered the renewed attacks on Israel in January at Iran’s urging. Let Hamas pay the price for giving in to the ayatollahs, Cairo’s leaders apparently thought. And Egypt has kept Haniyeh from returning to Gaza since then in retribution.

With the announcement of the Trump plan, and the Palestinian reaction to it, Iran saw its stock rise. Without Iran, the groups would have limited firepower to antagonize Israel. But, as is now clear, Iran’s support comes at a cost for Hamas’ dealing with Egypt and Israel, on which it depends for its economic lifelines.

Iran plainly sees a role for itself in the Palestinian-Israel conflict. When the United States proposed a peace plan, Supreme Leader Ayatollah Ali Khamenei immediately dubbed it “stupid” and said it “will die before Trump dies.” Iran’s Foreign Minister Mohammad Javad Zarif worked the phones to show Iranian mettle following the killing of Soleimani and in support of Palestinian rejection of the plan. His calls to Haniyeh and Islamic Jihad leader Ziyad al-Nakhalah were more or less routine, but his ringing up Palestinian Authority President Mahmoud Abbas, who has a strained relationship with Iran, was meant to send a flare that Iran was in the game, beefing up the rejectionist front to the deal.

Despite the bravado, Iranian leaders are nervous about the chance that the Trump plan would lead to new Israel-Palestinian talks backed by Egypt, Saudi Arabia and the United Arab Emirates. The leading Arab states stand behind Abbas’ rejection of the US proposal, with the Arab League and Organization of Islamic Cooperation both passing supportive resolutions this month. But they also are quietly encouraging Israel and the Palestinians to use the plan as the catalyst for a new dialogue. Iran, once again, is on the outside looking in. The empowerment of Abbas is a blow to Hamas, and by extension Iran, in intra-Palestinian politics.

Adnan Abu Amer explains that “Iran seeks to obtain regional and international positions rejecting the deal. It believes this deal not only targets the Palestinian cause but rather aims to establish a new regional system, whereby Israel normalizes ties with Arab countries, especially Gulf states, which want to secure Palestinian acceptance of the US deal.”

The key player in the conflict is now Egypt. The latest cease-fire reveals the weight of Egypt in Israeli-Palestinian affairs, and in particular in Gaza. Egypt is a trusted broker. It has walked a careful line on the Trump plan, as Hagar Hosny explains, and by doing so has preserved its options and leverage.

Egypt’s own security situation, on the border and in Sinai, compels closer cooperation with Israel. Rasha Abou Jalal reports that the Egyptian delegation discussed building a border wall with Hamas officials. The Islamic State took credit for blowing up an Israeli-Egyptian gas pipeline in Sinai Feb. 2, as our correspondent in Egypt writes.

‘The string of a balloon’

“Hamas,” writes Akiva Eldar, “is well versed in the rules of Israel’s political game. It knows that every incendiary balloon launched toward the Negev region on the eve of elections raises Netanyahu’s interest in a long-term cease-fire deal, which Israelis euphemistically dub an ‘arrangement.’ … [Netanyahu's] political fate, and perhaps his personal one, too, hangs on the string of a balloon.”

With the cease-fire, Netanyahu can continue his campaign by rightfully proclaiming that his message of "devastating action" had the intended effect. He stared down Hamas and came away a winner, with no messy casualties.

This doesn’t mean the next two weeks, and after, will necessarily stay calm. As Ben Caspit writes: “[T]his irritating front [Gaza] is a non-issue when compared to the [Israel Defense Force’s] other enemies in the new and complex post-Arab Spring Middle East reality.” For example, Israel has increased bombing of missiles and equipment in Syria that it can’t allow to reach Hezbollah. Netanyahu needs quiet in Gaza to focus on the northern front, where the stakes are much higher.