Convinced that Israel will not engage in a large-scale military operation before the September elections, Hamas seems to be allowing sporadic attacks from Gaza to escalate. 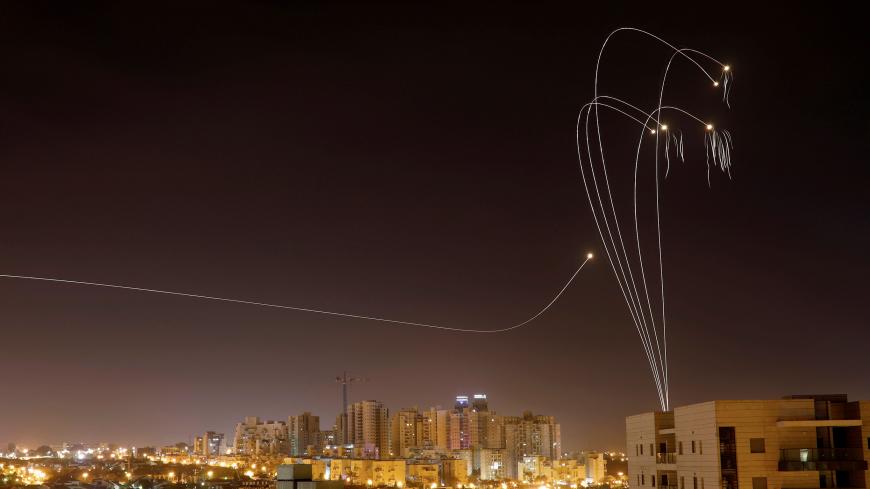 The Iron Dome anti-missile system fires interception missiles as rockets are launched from Gaza toward Israel as seen from the city of Ashkelon, Israel, Ashkelon, May 5, 2019. - REUTERS/Amir Cohen

Yet another stormy weekend has shaken up the Israel-Gaza border. On Aug. 17, just when it seemed southern Israel was settling into a period of calm following the cease-fire reached with Hamas in May, sirens blared throughout the border communities. The Iron Dome anti-missile system intercepted two of three rockets fired from Gaza into Israel. Shortly after, Israeli troops foiled an attempt by five armed militants to infiltrate Israel from the northern part of the Gaza Strip, killing three and wounding a fourth.

Israel’s reaction to these attacks was very restrained. The air force bombed several Hamas targets of marginal importance and was careful not to inflict Palestinian casualties. Such actions are known as “real estate attacks” designed to cause symbolic damage to buildings and nothing more. When the Israel Defense Forces really wants to deter the Hamas leadership, it takes more extreme actions such as flattening several multi-story buildings in May.

This time, it was almost as if the IDF were saying, “We are forced to react, but if you stop the next rocket or assailant, we can return to business as usual.” That was indeed the case. Calm was restored quickly but the rhetoric from Gaza was upped a notch. On Aug. 19, armed Gaza militias announced that the latest clashes near the border fence signal an escalation and called on Palestinians to “set fire to the ground under the Zionists’ feet.” A day later, a Hamas official quoted in Lebanon's Al-Akhbar threatened Israel with further escalation.

In recent weeks, the IDF has shot dead and injured several armed Palestinians who approached the Gaza-Israel border intending to cross into Israel. After each incident, Hamas insisted the would-be-attackers were “rogues” ousted from its ranks. Following the weekend clashes, Hamas is now calling them “rebellious angry youth.” Unlike “rogue” elements who take actions in violation of the organization’s orders, Hamas is portraying these angry young people as motivated by despair.

On Aug. 13, even before the rockets and attempted infiltration from northern Gaza, Hamas’ Gaza chief Yahya Sinwar was already on board with this new “rebellious youth” rhetoric. Although he himself is pushing for a long-term arrangement with Israel, Sinwar, like any politician, realized which way the wind was blowing. He had no choice but to praise the young people intent on torpedoing his goal. At a reception in his honor in the town of Khan Younis marking Eid al-Adha, Sinwar heaped praise on Hani Abu-Salah, a member of the Hamas military wing killed by Israeli troops on Aug. 1 after crossing the border and injuring an Israeli officer and two soldiers. Sinwar dubbed Abu-Salah’s attack “a sacrificial and heroic operation,” even though the organization initially reported that he had violated orders due to a personal grudge against Israel for killing his brother. Sinwar then added a threat: If Israel launches an offensive against Gaza, Hamas would rain down hundreds of rockets on Israel’s cities in one massive salvo and would destroy IDF ground forces if they dared cross into the Strip.

Sinwar was warning that Hamas had developed the capability to launch multiple rockets simultaneously, rendering the Iron Dome interceptors less effective. Indeed, during the armed clash in May, Hamas launched dozens of rockets at once.

He was also demanding Israel not retaliate, wether the violence along the border was an incursion by “rogue” or “rebellious” individuals or attacks initiated or encouraged by Hamas. A few days after Sinwar’s address in Khan Younis, Israel barely responded to the rocket salvo and attempted border infiltration.

Israeli security officials differ on Hamas’ motivation. One school of thought argues that Hamas and Sinwar himself are reading the Israeli political map correctly, understanding that Prime Minister Benjamin Netanyahu would not launch an all-out offensive on Gaza before the Sept. 17 national elections. That is why they are giving the go-ahead to carry out attacks against Israel, hoping they will lead to more concessions.

Others in Israel think Hamas has lost control over the Strip, prompting young men disappointed with what they view as a moderate Hamas policy on Israel to take matters into their own hands.

An Israeli security source told Al-Monitor that he believes both views reflect the complex situation in which Hamas finds itself and that if Sinwar thought that Israel would retaliate with a major offensive endangering the rule of Hamas or himself, he would rethink his moves. According to this source, even those within Israel’s security agencies advocating moderation and arguing that a long-term deal with Hamas was the best course of action are now coming around to a different view of Gaza's grim reality.

It makes sense that Israel will not mount another Operation Protective Edge, but the time has come for Israel to say, “No more.” Israel cannot allow Hamas to keep manipulating it and threatening residents of the south due to internal organizational or other troubles. Palestinian groups in Gaza claimed this week that Israel was playing with fire, but it is Hamas that is provoking Israel, convinced, erroneously, that Israel will not engage.

According to the Israeli source, after the September elections, regardless of who forms the next government, Israel will have to make dramatic decisions regarding Gaza. For the moment, Hamas continues to develop military capabilities and the organization’s leadership, armed forces and “rogue” or “rebellious” youngsters are buoyed by an inflated confidence. The longer Israel delays reacting, the more Israel’s south will turn into a no-man’s land in which Israelis will be unable to carry on with their lives.