In the framework of the Egypt-mediated deal between Israel and Hamas, the latter has promised to keep the demonstrations away from the border fence and under control. 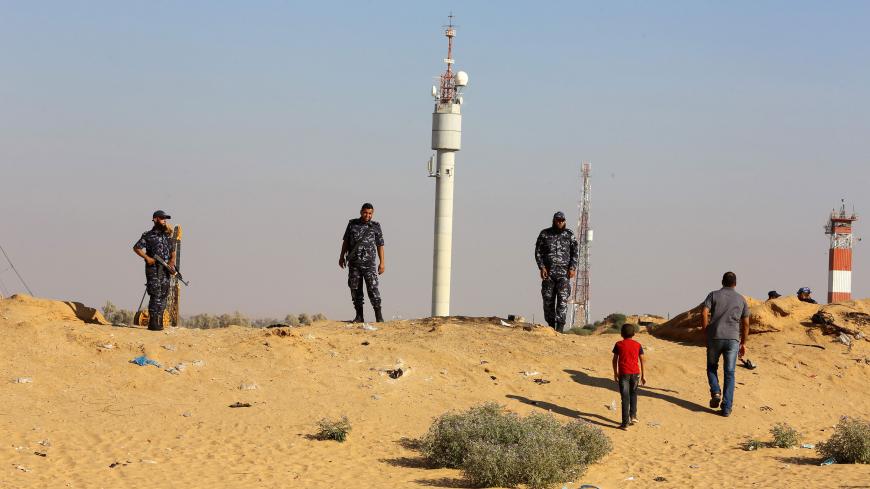 Palestinian forces take measures to prevent demonstrators from getting too close to the border during the Great March of Return demonstration at the Israel-Gaza border in Rafah, Gaza, Aug. 2, 2019. - Abed Rahim Khatib/Anadolu Agency via Getty Images

Two incidents on the Israel-Gaza border in recent weeks drew attention to a little-known Hamas unit dubbed the Restraining Force, established prior to the 2014 Gaza war with Israel. According to Israeli assessments, the unit numbers several hundred armed personnel who serve as a type of border patrol. The policing unit, as its name implies, is tasked with thwarting rocket attacks or terror attacks against Israeli targets by rogue organizations that could embroil Hamas in a war with Israel it does not want. Hamas regards the force as a guarantee of its own interests in controlling the conflict with Israel, allowing it to fan the flames some of the time and impose restraint at others.

Following the launch of mass Palestinian demonstrations along the Israeli border in March 2018, which resulted in Egyptian-mediated understandings between Hamas and Israel, Hamas tasked its armed wing — the Izz ad-Din al-Qassam Brigades — with forming a buffer between the border fence and the focal point of the demonstration. In other words, the armed Hamas wing that usually trains for war against the “Zionist enemy” was being ordered to defend the enclave’s border to ensure Israel’s security.

Hamas leaders gave their word to the Egyptian mediators that the Restraining Force would prevent protesters from breaching the border fence. At the same time, it was agreed that Hamas would allow protesters to express “popular resistance” under the forces’ watchful eyes. This arrangement allowed Hamas to deny it was selling out its jihadi ideology in return for an easing of Israel’s siege of Gaza or for its continued hold on power. Israel, for its part, agreed to the continued border demonstrations as long as they were kept "under control." The rival Fatah movement claims, to a large degree rightly so, that this deal is the Hamas-Israel version of the ongoing security coordination between Israel and the Palestinian Authority (PA).

On July 11, Israel inadvertently killed Mahmoud Ahmad Sabri al-Adham, a member of the Restraining Force, after army lookouts mistakenly identified him as a Palestinian intent on carrying out a terror attack. The army was quick to apologize, explaining that two other Palestinians had approached the border perimeter and the Restraining Force member sent to keep them away was mistakenly identified as a terrorist and shot dead. “The Israel Defense Forces (IDF) unit carried out a shooting stemming from a misunderstanding,” the official statement said. It continued, “The incident will be investigated.” Hamas did not react.

On Aug. 1, another Restraining Force member, Hani Abu-Salah, attacked IDF troops after infiltrating the border fence near the Kissufim crossing armed with a Kalashnikov and hand grenades. The troops shot him dead, but not before he inflicted moderate wounds on an Israeli officer and slightly wounded two soldiers. It turned out that the assailant was the brother of Fadi Abu-Salah, a double leg-amputee active in the Islamic Jihad who was killed by IDF fire during a May 2018 border protest. The IDF issued a statement saying it regarded the Aug. 1 infiltration as an unusual incident that did not involve Hamas. “This was an independent action by a terrorist acting on his own,” according to the statement.

Al-Monitor has learned from an Israeli security source who spoke on condition of anonymity that Hamas told the Egyptians it had decided to carry out an internal inspection of the Restraining Force. Each member would be “checked,” which could be interpreted as conducting security clearances to root out members with hidden agendas against Israel. Although not spelled out, one can assume that those whose relatives had been hit by IDF fire in the past would be removed from the force.

Hamas has also decided to conduct a series of lectures for members of the Restraining Force to hone their instructions so that IDF snipers could not misidentify them as armed terrorists and shoot them. By the way, Hamas refuses to provide force members with distinct uniforms that would make it easier to identify them for fear that Fatah and the PA would make use of their special uniforms to hound them as some sort of collaborators. Hamas also promised Egypt it would expand the “restraining forces” with dozens of new recruits to strengthen their capacity to ensure border protests do not veer out of control.

Another Israeli security source told Al-Monitor on condition of anonymity that Hamas understands the importance of maintaining restraint during the demonstrations near the border fence “and will not enable a return to last year’s mass protests during which dozens were killed in just one day and hundreds were wounded.”

Low casualty figures at the protests do not prompt an escalation on the part of Hamas. It sounds like a cynical game playing with people’s lives, but this is how Hamas has chosen to confront Israel. It conducts a controlled war of attrition under clear rules and with an understanding that every escalation vis-a-vis Israel could result in undesirable consequences for the organization. In this sense, the Restraining Force serves its purpose.

The war of attrition has been dragging on for over a year. Both sides know the exact limits of their power and have learned over time “to manage the conflict” rather than resolve it. After all, Israel will not lift its 11-year blockade of Gaza as long as Hamas is in power. Hamas, for its part, will keep showing its people that it has not given up fighting for an end to the siege and will keep promising the enclave’s 2 million residents a better future.

Meanwhile, the number of dead and injured during the border protests tells a grim story. According to a May 2019 report by the UN Office for the Coordination of Humanitarian Affairs, with data spanning the period from March 30, 2018, to April 30, 2019, since the start of the mass protests, 279 Palestinians have been killed and 31,000 have been injured. And the protests go on.