As Gaza despairs, Hamas has one option left: intifada

After the failure of Egypt-mediated Palestinian reconciliation, Gaza's deepening economic crisis has Hamas against a wall and violence lurks on the other side. 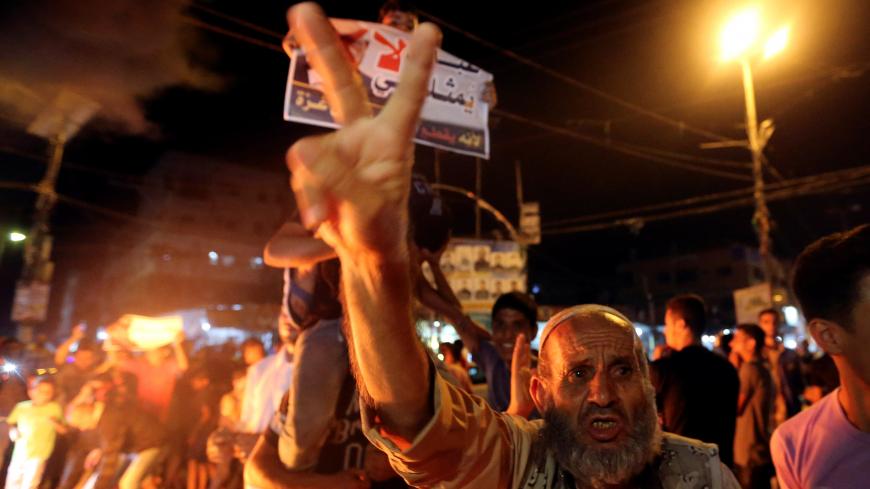 At the end of Palestinian President Mahmoud Abbas’ speech at the UN General Assembly meeting Sept. 27, thousands of Gaza Strip residents went out to the streets to demonstrate against him. At one protest near the Hamas government offices, “President Abbas does not represent us” appeared on several signs and protesters burned his picture.

The demonstrations were less spontaneous than they may have looked.

For a long time, anger and frustration at Abbas have been common in Gaza as well as a sense that he has abandoned them. The Palestinians in Gaza and the West Bank were less interested in the things Abbas said about President Donald Trump’s peace plan than on Abbas’ threat to step up sanctions against Hamas.

The curses and de-legitimization accorded to Abbas this last week from Hamas leaders made new records. The deputy head of Hamas' political bureau, Moussa Abu Marzouk, tweeted that for Abbas to be allowed to speak in the name of the Palestinians, he had to make big changes before leaving for the UN: halt his sanctions against Gaza, stop security coordination with Israel and unite the Palestinian people. As far as Hamas is concerned, Abbas represents only himself when he punishes half of the Palestinian people and collaborates with the enemy.

On Sept. 23, a delegation of Egyptian intelligence officers headed by Gen. Ahmed Abed Khalk arrived at the Gaza Strip. They left after only a day with a clear conclusion: A reconciliation agreement between Hamas and Fatah cannot be reached at this point in time. The gist of the talks was transmitted to Palestinian Authority representatives.

A Palestinian security source in the West Bank told Al-Monitor that Egypt will soon, perhaps even next week, make an official announcement that there is currently no chance of reaching understandings between Hamas and Fatah, and that the “arrangement” with Israel (for a long-term cease-fire and easing of the Gaza blockade) will not be completed. According to the source, the top Egyptian and Palestinian brass think that Hamas intends to escalate its confrontation with Israel. The heads of the movement, led by Hamas political bureau chief Ismail Haniyeh, have already promised the Gaza residents that the blockade on Gaza will be removed in the near future.

The Palestinian source also explained that Egypt had hoped for an internal Palestinian reconciliation that would return Abbas and his security forces to the Strip, which would in turn strengthen security in Sinai and on the Gaza-Egypt border. But in light of the failure, Egypt intends to cancel the measures it has taken to ease the blockade at the onset of talks between Hamas and Fatah, such as the opening of the Rafah crossing. As far as Egypt was concerned, the lifting of restrictions was a temporary measure to help create a positive atmosphere. Now that everything had fallen apart, there is no justification for a continued lifting of restrictions.

The Israeli side also understands that the Israel-Gaza border is likely to become even more problematic and IDF forces will be engaged even more than in the past. Israel knows that Hamas is already preparing the Gaza public for another round of fighting with the goal of bringing the blockade issue back to global attention. From Hamas’ point of view, the only means that has proven themselves are the fence protests and the release of incendiary kites and balloons into Israel. Recently, the Gaza envelope residents have discerned a new threat against them from the Strip: balloons carrying hand grenades.

Coordinator of Government Activities in the Territories head Kamil Abu Rukun sent a clear message to Gaza residents Sept. 21: Do not participate in the planned demonstrations. Rukun also warned them that Hamas is planning naval provocations and clarified, “If naval terror acts continue, we will restrict the fishing area to three miles. Do not cooperate with Hamas.”

An Israeli Civil Administration source told Al-Monitor on condition of anonymity that Hamas is preparing for another round of violence because it feels that there is no other way to give the Gazan public the sense that someone is doing something for them. According to the source, a continuation of the status quo with no end in sight to the decade-long Gaza blockade will lead to the loss of Palestinians' hope and create a palpable threat on the Hamas regime. “Its leaders are clearly hearing the criticisms against them inside the Strip,” he said.

I talked to Strip residents this past week, some of them acquaintances from the years I worked in Gaza. They spoke openly for the first time about how the people are sick and tired of the Hamas regime and noted that they are hoping it will fall. According to the residents, the mental block of fear has been smashed: Many of them are no longer afraid to express criticism of the movement’s leaders who brought catastrophe on Gaza. The past year was very difficult for Hamas, mainly due to the sanctions inflicted by Abbas on the Strip. A report by the International Monetary Fund that was made public on Sept. 17 expressed the destructive results of the sanctions. If IMF forecasts for the continuing decline come true, Gaza will collapse and so will the Hamas regime.

According to the report, the unemployment rate in the Strip is above 50% and among young people it reaches beyond 70%. The writers of the report noted that if the Strip does not receive immediate assistance, the Gaza economy could fall apart any day now.

Gaza's economy is on the verge of collapse, Abbas threatened Hamas in his UN speech and Egypt is expected to announce the failure of its reconciliation attempts and cancellation of its easements to the Gaza Strip in the near future. All this led the heads of Israel’s security systems to one obvious conclusion: A widespread armed conflict with Hamas in Gaza is only a matter of time.

It was reported Sept. 21 that the IDF will beef up its presence opposite the Strip and that the next few weeks will see an intensification of mass border confrontations by day and by night. The IDF has discerned a new pattern of behavior on the border: Hamas encouragement of Palestinian protests under cover of darkness. According to the IDF, there is a pattern of munitions and grenades hurled toward Israel and attempts to infiltrate Israel from the fence.

“We have returned to the exact same spot we were in three months ago, but this time there is no plan in the offing that provides a bit of hope for an arrangement,” an Israeli security source noted on condition of anonymity. “Now we are reaching the moment of truth.”

It seems likely that this time, Israel will be forced to make a historic decision after years of delay: Either resign itself to counting round after round of war games planned by Hamas to save its regime, or take action to bring it down.