The assassination of a Hamas-affiliated engineer in Malaysia turns the spotlight on the movement's drone program. 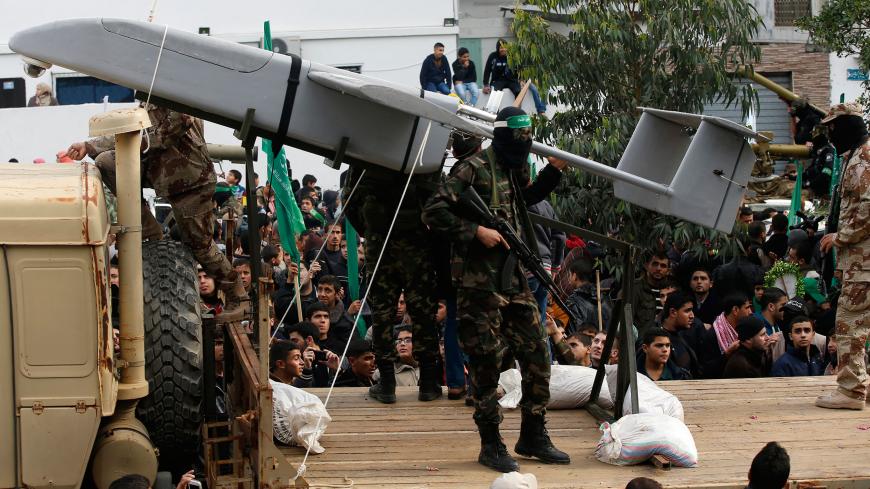 Israeli Defense Minister Avigdor Liberman has dismissed accusations that Israel gunned down Palestinian electrical engineer Fadi al-Batsh in the Malaysian capital of Kuala Lumpur. However, in an April 22 interview on Israel’s Kan public radio, Liberman left no room for doubt that Israel had all the reasons in the world to want to assassinate him. “The man was not a saint,” Liberman said. “He wasn’t involved with improving the electricity grid or infrastructure and water. We have heard the announcements by the heads of Hamas taking responsibility for the man, explaining that he was involved with the production of rockets, with improving the rockets’ accuracy.”

Transportation Minister Yisrael Katz, who also holds the government’s intelligence affairs portfolio, provided an even stronger hint. “Based on the cries of despair from the heads of Hamas in the Gaza Strip, it turns out he wasn't such a great saint and the citizens of Israel have no reason to shed a tear over him being gone," he told Ynet news website. Nonetheless, he added, Hamas has other enemies, and “many elements in this region, not just Israel, have an interest in hurting its capabilities."

Katz also referred to the implied threat by Hamas political bureau chief Ismail Haniyeh, who accused Israel of the Malaysian operation and warned that his organization could settle the score by terror attacks against Israeli targets abroad. "There will be an unsettled account between us and [the Mossad]," Haniyeh said. To which Katz responded with a barely veiled threat of his own: "Gaza is much closer than Malaysia."

Batsh was born in Jabaliya refugee camp. He studied electrical engineering at the Islamic University and left the Gaza Strip for Malaysia in 2011 to complete his doctoral studies. Several years later, he became a senior lecturer at the University of Kuala Lumpur. His move to Malaysia probably saved his life in the past. During Operation Protective Edge in 2014, 18 of his family members were killed in an Israeli attack. Then, on April 21, two assassins on motorbikes fired 20 rounds at point-blank range, killing Batsh.

Both Hamas and Islamic Jihad have issued threats to avenge his assassination. Both have claimed him as their own. Whether he was originally a Hamas or Islamic Jihad recruit, one thing is clear: Batsh was an excellent engineer who helped the Hamas military wing improve the range of its rockets and contributed greatly to the development of the movement’s ambitious new drone project.

At the mourning tent put up for Batsh in Gaza, Haniyeh said, “The timing of the assassination of the scholar is intended.” He did not elaborate, but appeared to be hinting at what Israel already knows — that the Hamas military wing is busy developing an unmanned aerial vehicle (UAV), and has even tested it. During these test flights, Hamas UAVs infiltrated Israeli airspace and were shot down. In February 2017, an Israeli F-16 fighter jet shot down a Hamas aircraft flying over the Mediterranean coast. Six months earlier, the Israel Defense Forces (IDF) published a video clip showing a Hamas drone intercepted along the coastline. According to the IDF, Israel detected the launch of the drone from Gaza and monitored its flight until its interception.

Despite the interceptions, Hamas continues its test flights. A Palestinian source in Gaza told Al-Monitor that Gaza residents occasionally see aircraft flying over the coast. These aircraft take off from inside the Gaza Strip in the Khan Yunis area and head for the Mediterranean, the source said on condition of anonymity.

Israel claims that both Hamas drones it intercepted were primitive, low-tech aircraft constituting little threat. However, experience in confronting Hamas weapons development capabilities shows that such projects must be stopped from the outset. At the turn of the century, Israel ignored, and even derided, Hamas rocket development attempts. The IDF treated the initial rockets test fired along the Gaza coast as crude projectiles. It only realized afterward that Hamas was investing extensive resources in developing the rockets, and even recruiting Islamic University students to contribute their skills to the military project that would shift the balance of power with Israel.

When Israel killed Qassam rocket developers Adnan al-Ghoul and Nidal Farahat in 2004, it was too late. The Qassam project could not be stopped and it has since enabled the Hamas military arm to develop a deterrent capability against Israel. Israel has no intention of making the same mistake in identifying future threats and thwarting them.

Batsh is not the first engineer whom Israel is thought to have killed, according to foreign media reports, over his alleged involvement in developing Hamas drones. In December 2016, an engineer named Mohammed al-Zoari was assassinated in Tunisia. He, too, was reportedly engaged in the UAV project, and he, too, was shot at point-blank range by two motorcycle-riding assassins.

Just as Zoari’s assassination did not stop the progress of the Hamas flagship project, Batsh’s death is unlikely to signal its demise, either. The organization has significantly accelerated its drone development. The Hamas leadership has intensified these efforts in recent months as it watched Israel destroy, one by one, the Palestinian attack tunnels dug under Gaza, burying an investment estimated at tens of millions of dollars.

Now one can only wonder whether Haniyeh and Mohammed al-Deif, the head of the Hamas military wing, really believe the drone project can change the balance of power vis-a-vis the Israeli air force, one of the most advanced in the world. The 2 million Palestinian residents of the Gaza Strip are paying every hour of every day for these skewed priorities based mostly on the illusion of military might.