How Malaysia is becoming Hamas' gateway to Asia

Hamas will participate in Malaysia’s Islamic Summit, another indication of the growing ties between the two. 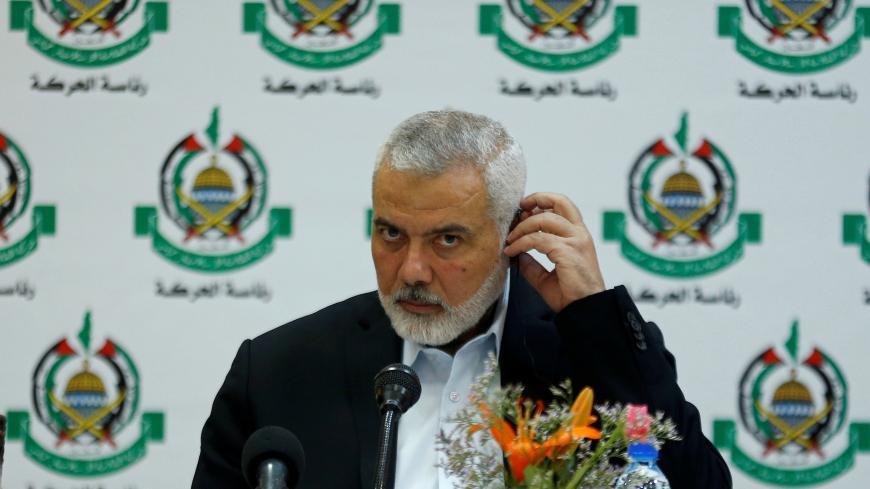 Egyptian parliament member Samir Ghattas, who is close to the Egyptian intelligence and Palestinian President Mahmoud Abbas and very critical of Hamas, said Dec. 9 that Egypt has allowed Hamas politburo head Ismail Haniyeh to tour Russia, Malaysia, Qatar and Turkey, but not Iran. This is Haniyeh’s first tour since he was elected president of the movement in May 2017.

He described Haniyeh’s visit to Malaysia as being of paramount importance since some Hamas leaders are likely to be relocated from Qatar to Kuala Lumpur.

Talal Sharif, a Palestinian writer with the website Amad and a supporter of dismissed Fatah leader Mohammed Dahlan, who is close to the United Arab Emirates and Saudi Arabia, said Dec. 11 any reconciliation between Saudi Arabia and Qatar might require Doha to stop supporting Hamas.

Since the beginning of December, there have been indications of reconciliation between Saudi Arabia and Qatar following the rupture in relations in June 2017. Among the conditions for such reconciliation, Qatar is likely to be requested to stop sheltering Muslim Brotherhood leaders as well as Hamas, since the movement is seen as affiliated with the Islamic group.

Qatari Foreign Minister Mohammed bin Abdulrahman Al Thani said Dec. 6 during the Mediterranean Dialogues in Rome that Qatar does not support political Islam or the Muslim Brotherhood; rather, it supports the people and not the political parties.

Back on June 13, 2017, former Saudi Brigadier in the Saudi intelligence Anwar Ashqi told Shorouk News the conditions for any reconciliation in the Gulf include expelling leaders of the Muslim Brotherhood from Doha as well as leaders of the Palestinian Hamas movement, stressing the movement ought to cut its relationship with Iran.

Meanwhile, Hamas and Saudi Arabia’s relations have been strained, especially since more than 60 Hamas supporters have been arrested in Riyadh since April.

Mahmoud Mardawi, a member of Hamas' National Relations Office, told Al-Monitor, “We welcome any reconciliation in the Gulf. We do not, however, believe that this will come at our expense. Hamas leaders always seek to be geographically close to the Palestinian border, and the movement is concerned with strengthening its relations with neighboring countries. But this should not be at the expense of the Arab, Islamic and friendly countries.”

“It is up to Hamas to determine in which country it would be based or present without any regional or international pressure,” he added.

Hamas and Qatar have close ties, perhaps the strongest between Arab countries, given their extensive contacts, generous Qatari support to the Gaza Strip, and the strong personal relationship between Emir Sheikh Tamim bin Hamad Al Thani and the leadership of Hamas.

Al-Monitor learned from media sources in Doha that Qatar welcomed Haniyeh’s several-month stay in Qatar and said it would facilitate his logistic needs.

In 2015, under pressure from Israel and the United States, Qatar requested that Hamas politburo member Saleh al-Arouri and six other members in the movement leave its territory; they were distributed in Lebanon, Malaysia and Turkey because of their role in armed operations against Israel. This, however, did not adversely affect the movement’s ties with Doha.

Muhamad Shtiwi, a professor of political media at the Palestinian Technical University Kadoorei in the West Bank and a graduate of the Islamic Science University of Malaysia, told Al-Monitor, “Qatar will not sacrifice its relationship with Hamas because it would lose its influence on the movement. But some of Hamas’ leaders in Qatar could be moved and relocated to other countries, but not necessarily all of them to Malaysia. Hamas is already strongly present there, with important members and leaders who are very much welcomed there.”

“The relationship of Hamas and Malaysia is at its best and has been strengthened since Malaysian Prime Minister Mahathir Mohamad returned to power in 2018. The movement also has strong ties with the People's Justice Party led by Anwar Ibrahim, who will soon take over the government,” Shtiwi added.

Khalil al-Hayya, a member of Hamas' politburo, announced Dec. 11 the movement’s participation with a high-level delegation to the 2019 Islamic Summit of Kuala Lumpur, currently ongoing Dec. 18- 21.

Malaysia, Turkey, Qatar, Pakistan and Indonesia were invited to the summit, which was shunned by Saudi Arabia and Egypt.

Riyadh and Cairo fear this summit might lead to the possible formation of a new alliance, which would be a substitute for the Organization of the Islamic Conference — Saudi Arabia’s gateway to leading the Islamic World.

Muslim Imran, head of the Palestinian Cultural Organization Malaysia, told Al-Monitor, “The Malaysian support for Palestinians is at both the political and diplomatic levels. Malaysia is supportive of the Palestinian Authority's efforts. It announced in October the opening of an embassy for Palestine based in Jordan. This is not to mention the humanitarian aid through the country’s relief organizations such as Aman Palestine and Aqsa Sharif organizations.”

“Malaysia has also offered scholarships for Palestinian students to attend Malaysian universities and maintains good relations with Palestinian factions, namely Hamas in its wars against Israel,” he added.

Malaysia witnessed a series of visits by high-ranking Hamas delegations, the last of which was the visit of former leader Khaled Meshaal in May.

Meshaal visited Kuala Lumpur in December 2015; before that, he was head of a Hamas delegation that visited the country for the first time in December 2013.

In all visits, Hamas has praised the Malaysian support for the Palestinian issue.

Hamas' growing ties with Malaysia come at the expense of the latter’s strained relations with Israel, which did not allow Malaysian diplomats visiting the Palestinian territories Dec. 3 to pass through Israel.

This decision comes in response to Prime Minister Mohamad’s statement last January that he would ban Israeli swimmers from entering his country to participate in the World Para Swimming Championships.

In April 2018, Fadi al-Batash, a Hamas operative, was assassinated in Kuala Lumpur. The finger of blame was pointed at Israel, which neither denied nor confirmed responsibility.

Sharif Abu Shammala, head of the al-Quds Foundation Malaysia, told Al-Monitor, “The biggest Malaysian support for Hamas is to keep the Palestinian issue part of the country’s official discourse and encourage its charitable organizations to play a humanitarian role in Gaza to alleviate its harsh living conditions, as well as continuing to allow Palestinians to enter it without a visa. Palestinians constitute the largest Arab community in Malaysia.”

“The official and popular support and appreciation of Hamas in Malaysia serves as an outlet for the movement in Southeast Asia and contributes to strengthening its relations with countries neighboring Malaysia,” he added.

It is true that Malaysia’s positions are in harmony with that of Qatar, Turkey and Iran, which have close ties with Hamas, but Kuala Lumpur remains in the eyes of Egypt, Israel and Saudi Arabia less harmful than Tehran, which seeks to further strengthen its relations with Hamas.