The former head of Hamas’ political bureau, Khaled Meshaal, paid official visits to Mauritania and Morocco, a sign of the movement’s efforts to shore up support in the region. 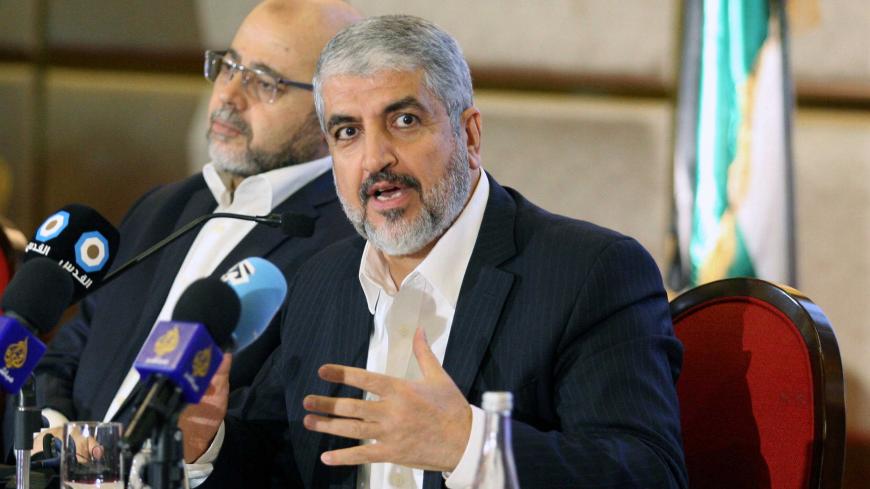 It has been eight months since Hamas’ internal elections in May, when Khaled Meshaal stepped down to be replaced by Ismail Haniyeh as head of the movement’s political bureau. Yet Meshaal has returned to the spotlight with an official visit to Mauritania and Morocco at the end of December.

Meshaal’s tour began in Mauritania Dec. 21 to participate in the conference of the National Rally for Reform and Development (Tewassoul) in Nouakchott.

He met Dec. 23 with figures including Sidi Ould Cheikh Abdallahi, leader of the ruling party, and the Mauritanian Union for the Republic (UPR), to discuss the Jerusalem developments and the Palestinian cause.

Meshaal announced during a speech at the Dec. 24 opening ceremony of the conference that while he had come to Mauritania upon the invitation of Tewassoul, an opposition party, he had been officially welcomed by the president, who approved of the visit.

On Dec. 25, Meshaal met with Mauritania’s President Mohamed Ould Abdel Aziz and expressed how proud he was of the visit and of the public and official interaction in Mauritania with the Palestinian cause. Meshaal thanked Abdel Aziz for severing ties with Israel in 2010 and passed on Haniyeh’s regards.

Izzat al-Rishq, a member of Hamas’ political bureau and head of its office of Arab and Islamic relations, told Al-Monitor, “Meshaal’s visits to Mauritania and Morocco are part of Hamas’ outreach in Arab and Muslim countries and the world. Hamas visited Turkey, Qatar, Iran, Malaysia, Lebanon, Sudan and South Africa, and it will continue its tour in the coming days. The visit to Mauritania and Morocco reflected Hamas’ official and public presence there despite the blockade the movement is under.”

Rishq noted, “Hamas’ visit to Morocco and Mauritania caught the interest of the ruling parties and the opposition, which indicates that the Palestinian [cause] is strongly present in political circles. [Meshaal’s] meeting with all political sides went over well among media and political figures because it showed that Hamas was trying to embrace all sides that love Palestine and are working for it, despite their different political inclinations.”

Mohamed Mukhtar al-Shanqiti, a Mauritanian political researcher and professor of political ethics and history of religion at Hamad Bin Khalifa University in Qatar, told Al-Monitor, “Meshaal’s visit to Nouakchott carried good intentions, and his public and official welcoming showed the solidarity of both the Mauritanian president and the opposition with the Palestinian cause and Jerusalem. Perhaps Hamas realized that one of the advantages of the current Mauritanian regime is that it cut ties with Israel and took a stern stance against [US President Donald] Trump’s declaration of Jerusalem as the capital of Israel Dec. 6.”

Though Israel and Mauritania established full diplomatic relations in 1999, they suffered a severe setback when Israel waged its war on the Gaza Strip from December 2008 to January 2009. During that time, Nouakchott froze diplomatic ties with Tel Aviv and asked the staff of the Israeli Embassy to leave. The embassy was shut down and the Israeli flag was lowered. In March 2010, Mauritania announced it was severing diplomatic ties with Israel completely.

Shanqiti added, “Although establishing a Hamas office in Nouakchott is on the table, there are regional considerations at play. Progress could have been made if Mauritania were close to Qatar, which has tight relations with Hamas. But the current Gulf crisis drew Mauritania, Saudi Arabia and the UAE closer to each other and farther away from Qatar.”

On June 7, Mauritania joined a Saudi-led bloc and cut ties with Qatar over its alleged support for terrorist organizations and spreading chaos and division in Arab countries.

Meshaal left Mauritania Dec. 26 for Morocco upon the invitation of its Justice and Development Party. During his two-day visit, he met with Moroccan Prime Minister Saadeddine Othmani, the ruling party leadership and its parliamentary bloc as well as the leaders of the Party of Progress and Socialism, the Authenticity and Modernity Party, Istiqlal, the Socialist Union of Popular Forces Party and the Unity and Reform Party.

The Moroccan king heads the Jerusalem Committee established in 1975 by the Organization of Islamic Cooperation (OIC). In 1979, Morocco established Bayt Mal al-Qods to collect donations to support Jerusalemites. One of the strongest steps against Trump’s Jerusalem declaration came when Rabat summoned the US charge d’affaires Dec. 6 to express its deep concern about the decision. On Dec. 12, the Moroccan parliament condemned the decision and dismissed it as illegitimate, demanding a halt to Israel’s provocation of Palestinians.

Aziz al-Atatiri, editor-in-chief of the Moroccan al-Massae newspaper, told Al-Monitor that although Moroccan political circles do not welcome Hamas, a Muslim Brotherhood affiliate, "Meshaal was warmly received by socialist, liberal and communist parties, which surprised Moroccans because these parties had accused Hamas of derailing the peaceful track of the Palestinian cause.”

He added, “Still, the visit does not mean an office for Hamas will open in Rabat. This step might not be necessary because Hamas has tight relations and coordination with Islamist Moroccan parties, which perform the duties of such an office.”

Moroccan events in solidarity with Jerusalem coincided with Meshaal’s visit. Meshaal filled in the Moroccan parties he met on the developments of the Hamas-Fatah reconciliation. He praised Morocco's "smart" dealing with the Arab Spring, saying the king took a clever and courageous step in facilitating a democratic environment that has gone to good use.

Yehya Alem, a Moroccan researcher on Islamic parties, told Al-Monitor, “Meshaal’s visit to Morocco, upon the invitation of the Moroccan prime minister and with the blessing of the king, is a political message of multiple meanings in the context of the Palestinian cause and the Jerusalem declaration. Moroccans regard Jerusalem highly, and the Moroccan king heads the Jerusalem Committee that came out of the OIC in 1975.”

The Jerusalem Committee works to deter Israeli attempts to subdue Jerusalem’s Arab and Islamic character and implements important projects in health, education, housing and the affairs of children, youth and women.

Alem added, “But the visit’s main significance is that a symbol of the Palestinian resistance treaded the Moroccan soil with the king’s blessing, which could signal Morocco’s official political openness to national Palestinian powers like Hamas. The movement extracts legitimacy from defying Israel, in addition to its democratic political legitimacy in the Palestinian territories.”

Abdul Sattar Qassem, a professor of political science at An-Najah National University in the West Bank, told Al-Monitor, “Meshaal’s visit to Morocco and Mauritania was a positive step despite Hamas’ slackening in interacting with the Arab Maghreb. The Jerusalem topic was a discussion opportunity for Hamas during the visit. Morocco is among the most sympathetic countries with Palestinians, and perhaps Meshaal’s meeting with the Mauritanian president and Moroccan prime minister reinforce the official status of the visit arranged with the Hamas leadership. The leadership appreciates Meshaal’s long experience and political relations, even though he is no longer Hamas’ leader. Meshaal has not withdrawn and will remain present in the decision-making circles of the movement, which benefits from his network of relations that he built over the years.”