Why Did Iran Postpone Meshaal Visit?

The "resistance" axis of Iran, Syria and Hezbollah are not in agreement over welcoming Hamas back into the fold. 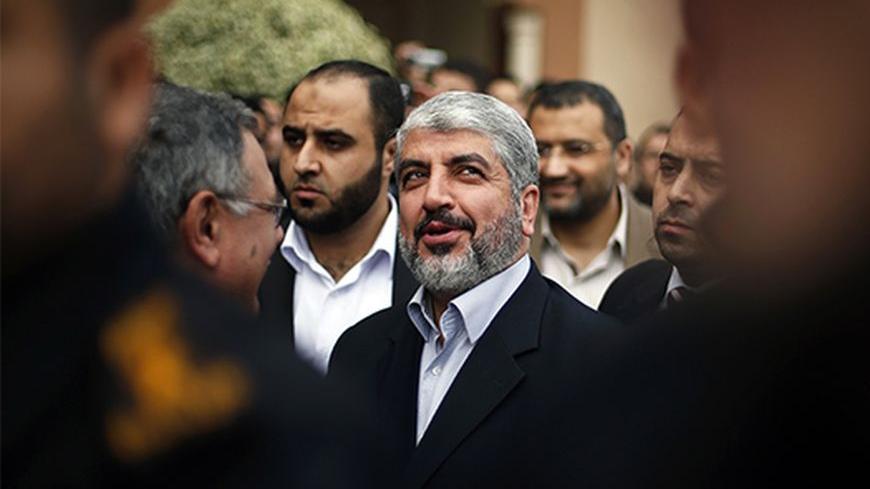 News that the head of Hamas’ political bureau, Khaled Meshaal, may visit Iran has dominated the behind-the-scenes Palestinian political discourse. Decision-makers in Gaza, Doha, Tehran and Damascus have exchanged indirect messages about the speculated visit.

Amir Mousavi, an official in the Supreme Council for the Iranian Revolution, told Hamas’ Al-Resalah newspaper on Oct. 23 that preparations are being made for a meeting between Meshaal and Iranian President Hassan Rouhani in the coming weeks to strengthen bilateral relations.

The visit, however, was postponed by Iran for unknown reasons. Ahmed Yousef, a former political adviser to the Hamas government, blamed the postponement on Iran’s preoccupation with internal issues and its ongoing talks with the international community. He revealed that a Hamas delegation had secretly visited Tehran this month to reduce the differences in their relations and reach a “conciliatory approach” to managing strategic relationships.

Meanwhile, Izzat al-Rishq, a member of the Hamas political bureau and media official, told Al-Monitor during an interview that there are no preparations for Meshaal to visit Tehran and that all talk in that regard is just speculation intended to distort Hamas’ positions.

Rishq added that an official visit to Tehran was carried out by Mohammad Nasr — also a member of the Hamas political bureau — commissioned by the Hamas leadership to offer condolences to Qassem Suleimani, the commander of the Quds Force of the Revolutionary Guards, for the death of his mother. Rishq denied that Nasr requested that Meshaal be allowed to visit Iran or prepare for it, and that there was therefore no point talking about whether Iran rejected or postponed the visit.

That was confirmed by Hamas spokesman Sami Abu Zuhri, who reportedly said that no appointment for Meshaal to visit Tehran was set, and thus no appointment was canceled.

Some Lebanese journalists close to Hezbollah have pointed out, however, that if Iran eventually receives Meshaal, it will not be free of conditions. The Iranians want Hamas to atone for its behavior in the past two years. According to Lebanese media reports, some in Iran have threatened to organize demonstrations at the airport to prevent Meshaal from entering the country. Meanwhile, other Iranian circles feel that Meshaal visiting Iran would turn a page.

Al-Monitor asked a former senior Iranian official who is now close to the decision-making circles in Tehran about these leaks. The official said that the axis consisting of Syria, Iran and Hezbollah is not in full agreement on the resumption of relations with Hamas, because each has its own calculations and interests. He added that there has been a Syrian "veto" on reconciliation with Hamas before the group committed to a series of conditions, among them openly apologizing to Syria and withdrawing its fighters from there.

In a recent interview, President Bashar al-Assad referred to the matter when he demanded that Hamas keep its distance from the Muslim Brotherhood.

In a speech last week, Ismail Haniyeh — head of the Hamas government in Gaza — said, “Hamas will apologize to no one and does not regret its foreign policy position,” alluding to Hamas’ position on the Syrian issue.

In the same interview with Al-Resalah, Mousavi expressed Iran’s understanding for Hamas’ position toward Syria, by virtue of the group’s relations with the Arab states and the siege and harassment against Hamas. Mousavi said that Tehran is not asking Hamas to apologize, as the movement has acted rationally and wisely in light of the complexities of the political circumstances in the region.

It should be noted that Al-Monitor received an exclusive statement from Khalil al-Hayya, a prominent Hamas figure in Gaza, in which he denied that any Hamas elements were fighting in Syria. He claimed that if some Hamas supporters or sympathizers are in Syria, they are doing so in their personal capacity and Hamas is not responsible for them.

Syrian and Iranian circles claim that the Hamas-backed Aknaf Bayt al-Maqdis battalion, whose fighters are of Palestinian origin, is fighting in Syria. But Rafat Murra, who is the political official in charge of Hamas in Lebanon, has denied this and stressed that the military presence of the movement is limited to Palestine and to fighting Israel.

The Iranian source told Al-Monitor about a Syrian “condition” whereby some Iranian and Hezbollah circles are demanding that Meshaal be kept away from Hamas’ general scene. This would mean isolating him from the leadership, considering that he was the one who made the decision to move Hamas out of Damascus.

Al-Monitor has also learned from inside Hamas that great internal pressure was exerted on Meshaal and the movement’s leadership abroad to leave Syria in mid-2012 for fear that the group staying there would grant Assad an opportunity to control the Palestinian resistance, as he cracked down on a peaceful popular revolution. Meshaal was the last official who wanted to leave Damascus.

The Iranian Tabnak website, which is affiliated with Islamic Revolutionary Guard Corps Cmdr. Mohsen Rezai, expressed its opposition to Meshaal’s visit because Hamas elements are fighting the Syrian army. The site demanded that Meshaal not be allowed to enter Iran for having suspended relations with Hamas and making future ties conditional upon Meshaal stepping down from the leadership. The site stated the famous Persian phrase, "No khosh amdid for Meshaal in Tehran," which means that Meshaal would not be welcomed in Tehran.

Rishq also told Al-Monitor that Iran had put forth no conditions, and that these are mere media leaks. He said that Hamas is not interested in commenting on them, but, in principle, “we refuse to discuss them because they impinge on the movement’s independence.”

A senior Hamas official in Gaza said even more explicitly that Meshaal is Hamas’ leader at home and abroad and that any policy decisions taken by the movement are not the responsibility of any particular official as the regulatory institutions at all levels of Hamas’ leadership ratify them. These decisions include departing from Syria and relations with Iran.

“Those parties interested in fixing the relationship with us should know that we are keen to keep the movement united and that we are all behind Meshaal’s leadership, which is more important than any relationship with any country that we respect and appreciate. Thus, everybody must deal with us through Hamas’ main gateway: Khaled Meshaal,” he added.

The Iranian official concluded his interview with Al-Monitor by saying that even though Meshaal’s visit to Iran faltered, Iran seems determined to keep its relationship with Hamas — whose roots are in the Sunni Muslim Brotherhood — so that Iran can counter accusations that it has adopted purely sectarian policies and alliances. He said that Hamas is Iran’s bridge to Sunni political Islam, which shares certain positions and interests with Iran despite the disagreement between the two sides on the Syrian crisis.

The postponement of Meshaal’s visit nevertheless signals that Hamas’ relations with Tehran will not return to a honeymoon period anytime soon. At the same time, however, Hamas is careful not to let matters descend into an irrevocable divorce with Iran.