Rumors about Hamas Chief of Political Bureau Khaled Meshaal leaving Qatar for Beirut have sparked criticism within the movement toward those exiled leaders who refuse to return to Gaza. 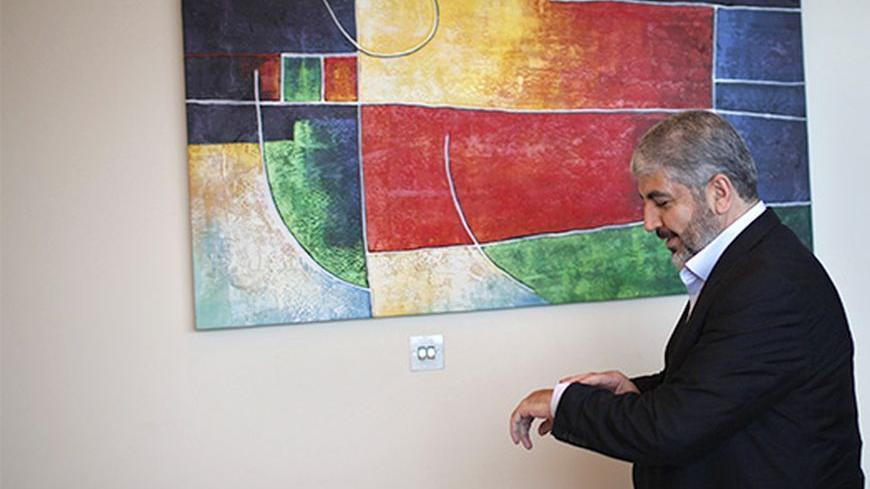 The rumors have been circulating inside and outside Gaza for a long time. Khaled Meshaal, the head of Hamas’ political bureau, is supposedly in hot water in his new abode in Qatar and is looking for another place to live. Al-Monitor correspondent Adnan Abu Amer talked with the spokesman of the movement’s political bureau, Izzat al-Rishq, who denied the rumor and claimed that this is only propaganda aimed to harm Hamas.

Mousa Abu Marzouk, a senior Hamas member who has lived in Cairo ever since Hamas officials abandoned Damascus, also wrote on his Facebook page that Meshaal continues to live in Qatar. Marzouk added that no limitations are placed on Meshaal, hinting at stubborn rumors that Meshaal has been under house arrest ever since Qatar’s change of government. It is interesting that Marzouk and al-Rishq were forced to deny rumors in the name of the head of the political bureau, when Meshaal actually lives very close to Al Jazeera’s network studios. Meanwhile, Meshaal's face was not seen and his voice was not heard [on the screen] for months.

Meshaal's disappearance off the radar provides another opportunity for Hamas leaders in Gaza, who disagree with Meshaal’s path and oppose his leadership, to verbally attack him. Some of them accuse him of being responsible for one of the largest crises faced by Hamas since its inception. According to his detractors, Meshaal abandoned one of the sacred principles of the organization since its founding: the collaboration of all the movement heads when making decisions. Meshaal began to make decisions on his own, and caused erosion in the position of the Shura Council that, in the past, had been the supreme authority for all decisions. Meshaal only introduced his close associates into the council, and ignited a severe dispute with the heads of the movement in the Gaza Strip.

The Hamas sources I talked with have long since raised the argument that Meshaal no longer has an excuse to continue to live in another Arab state besides Palestine — in other words, Gaza. “Enough, this is a different era,” said an official from the movement. “It’s about time that he return home to his nation and, like everyone else, feel what it’s like to live in Gaza.” He brought the example of Imad al-Almi, one of the movement’s leaders, who decided to return and settle with his family in Gaza, after the movement’s offices were closed in Damascus.

Khaled Meshaal was born in Silwad, a village in the Ramallah district. He left the village as a youth, together with his family, to settle in Kuwait after the 1967 Six-Day War. In the early 1990s Meshaal joined the Hamas political bureau that was established by Moussa Abu Marzouk, and served as his deputy. In 1995, Abu Marzouk was arrested by the Americans.

The basis of Hamas’ political bureau was founded by Marzouk in the US state of Virginia. The bureau’s raison d'être was to raise funds for the movement’s activities in the territories, thus operating outside Israel’s reach. This is also one of the reasons that led to Meshaal’s election as leader of the movement, after Israel’s assassination of Sheikh Ahmed Yassin and Abdel Aziz Rantisi in the spring of 2004.

Meshaal’s disadvantage turned into an advantage. Hamas had always boasted, over the years, that its leaders were part and parcel of Gaza’s refugee camps impoverished population. Now, however, it was forced to choose a leader who not only had not been born in the Strip, but had never even stepped foot on its turf in his life. Meshaal’s geographical distance from Gaza and the territories and his distance from Israel’s assault helicopters that had eliminated Hamas leaders one after the other, now became an advantage.

But since then, a lot of water has passed under the bridge. The Hamas movement won the elections and founded an elected government and for seven years has had its own prime minister in the Gaza Strip. If Meshaal would live among his nation, say his detractors, he would see that he faces no greater danger to his life than that which hovers above the head of Prime Minister Ismail Haniyeh. The Gazans also do not spare their criticisms of Moussa Abu Marzouk, who preferred to settle his family in turbulent Cairo instead of returning to Rafah, the city of his birth.

Hamas is isolated today not only because the Muslim Brotherhood has been sent packing from Egypt, but also because of its shaken relationship with Iran and, of course, Syria. Meshaal had placed his bets on Qatar to replace Tehran as the movement’s main ally, but Qatar emerged as weak as a broken reed.

At the head of those who criticize Meshaal’s policies and leadership is Mahmoud al-Zahar, who has formed a camp of supporters around him. Zahar is wont to tell his associates that Meshaal acted like a blindfolded horse that barged into a concrete wall, breaking his head and damaging his brain. Zahar felt that Meshaal lurched straight ahead, refusing to heed warnings and listen to advice.

Zahar’s words mainly refer to the crisis that emerged between Hamas and Iran “our friend,” as he calls it. Zahar is the only one in Hamas that has kept a channel open with Tehran. There are those in the Strip who argue that this is the only window of opportunity remaining for the movement’s hopes of rescue and recovery from the current economic crisis that threatens to lead to its collapse.

Will Meshaal finally decide to come to Gaza and settle down there? It's very doubtful whether a person who has been accustomed to comfortable living conditions and freedom of movement all his life would come to live in the crowded, besieged Strip. If Meshaal were forced to leave Qatar, he would probably find new reasons not to choose Gaza so as not to fall into the hands of his enemies who lie in wait for him around every corner. And this time, for a change, the enemies are not from Israel.