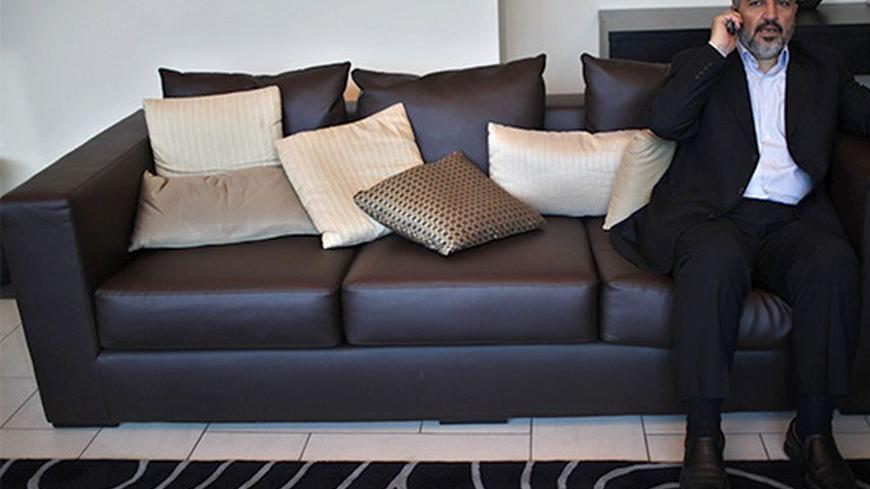 Many questions have recently been raised about Hamas leader Khaled Meshaal's conspicuous absence of more than two months. He did not visit an Arab capital or appear on television, including on Al Jazeera, which is only a few meters from his headquarters and residence. He finally broke his silence on Sept. 23 with a surprise appearance on Al Jazeera.

Meshaal’s disappearance led to speculation in the realm of politics as well as in the media. The Lebanese newspaper Al-Akhbar, which is close to Hezbollah, reported that Meshaal was experiencing trying circumstances in Doha, the Qatari capital. This situation, according to the paper, drove him to seriously contemplate leaving the city in favor of the Sudanese capital of Khartoum or perhaps Beirut or Tehran. Izzat al-Rishq, spokesman for Hamas’ external bureau, flatly denied such reports. According to him, Meshaal’s residence in Qatar has not changed nor has that of the rest of the Hamas leadership. He described the reports on the matter as propaganda designed to harm Hamas.

In an exclusive interview with Al-Monitor, Rishq stressed that Hamas’ leadership has not even raised leaving Qatar as a topic for discussion, claiming that the group sees no need for such an action. In his view, many Arab states are open to hosting Hamas, despite what some view as a tightening siege against the group.

Mousa Abu Marzouk, the deputy chairman of Hamas’ Political Bureau who resides in Egypt, also categorically denied reports that Meshaal and the Hamas leaders and cadres with him in Qatar were somehow being pressured. He asserted that such reports are without foundation or, as he put it, “simply lies.” In addition, according to a message Marzouk posted on his Facebook page, Meshaal has not been subjected to any restrictions. The few news reports to have discussed the question of Hamas leaders leaving Qatar have also claimed that Meshaal remains in the country under house arrest, with Qatari authorities preventing him from moving about “for security reasons.” According to these reports, Meshaal’s living situation all but resembles a “tight blockade” on his movements.

Rishq, who is widely described as having Meshaal’s ear and consults with him on most decisions, stressed to Al-Monitor that the Qataris have provided Hamas with all the amenities it has requested. Qatar has also, Rishq said, opened the gate to Meshaal to perform all his duties without hindrance or harassment. In fact, Meshaal maintains warm ties with the country’s leadership, especially Emir Tamim Al Thani.

A prominent Qatari journalist who asked to remain anonymous told Al-Monitor that Meshaal’s residence, in downtown Doha, is referred to as the “guesthouse” and is always teeming with visitors, local and foreign, including diplomats, ambassadors, politicians and intellectuals. “Guests from around the world, who come to participate in all the political and cultural activities that take place in Qatar, all make time to meet with Meshaal,” he contended.

Perhaps the most reliable refutation of the rumors of the pressures to which Meshaal has allegedly been subjected in Qatar is Meshaal's appearance on Al-Jazeera, which is owned by Qatar's royal family. On the network, Meshaal declared that his absence from the media spotlight in preceding weeks had been the result of constant activity in the Arab region. He also said that sometimes he simply prefers to remain out of sight.

All this aside, Hamas' online media has reported that in the coming days, Meshaal will give a political address, from Doha, that he describes as “important.” Meshaal is expected to attempt to clarify his movement’s general policy for the coming stage, as well as address the situation in the Palestinian territories. He will also discuss Hamas’ relations with neighboring states. All this means, in effect, that no limits are being imposed upon his movements or public statements. Al-Monitor has learned from exclusive sources that Meshaal will participate on Oct. 9 in an International al-Quds Foundation conference, to be held in Beirut. The gathering is dedicated to discussing the issue of Jerusalem in light of escalating Israeli measures against the city’s Arab identity.

Options other than Qatar

The "generous” situation that Hamas enjoys in Qatar, as one senior Hamas official described it to Al-Monitor, does not mean that the party is avoiding vigorous internal discussion on whether to seek options other than Qatar, especially given the unprecedented political tension that rapidly developed in Hamas’ relations with Egypt.

Perhaps some of what is driving Hamas to search for host countries in addition to Qatar is its desire to remain geographically close to the Palestinian territories, so the organization can remain in close contact with its "human depth” there. As one Hamas official pointed out to Al-Monitor, this had been possible when the organization was based in Jordan in the 1990s, in Syria in the 2000s, and finally in Egypt between 2011 and 2013. With its relocation to Qatar — some 1,800 kilometers (1,118 miles) away from Palestine — the movement lost such proximity.

Yet the same source in Hamas said that the party’s search for alternatives and geographic locales has had no impact whatsoever on its “excellent” relations with Qatar. Hamas’ media statements and political behavior have, according to him, bound the movement tightly to Qatar. He also noted, “Qatar hosted Hamas’ leadership when Jordan decided to sever its relations with the party in 1999. It opened its doors when Hamas departed Syria in 2012. It hosted the Arab League summit during the first war on Gaza in 2008. It supported the Gaza Strip with development and investment projects offered by no other Arab countries besides itself.”

The official contended that the group's resumption of relations with its former allies in the Iranian axis will not be conditioned upon the group’s leadership leaving Qatar. He stressed that on the one hand, Iran has not demanded this, but on the other hand, Hamas does not enjoy a “surplus” of political capital that affords it the luxury of absolute certainty, so it must keep its options open regarding bases for its leadership.