Hamas Ties to Qatar Have Cost

Hamas seeks to maintain its independence but has faced challenges since pivoting from Syria and Iran to Qatar, writes Adnan Abu Amer. 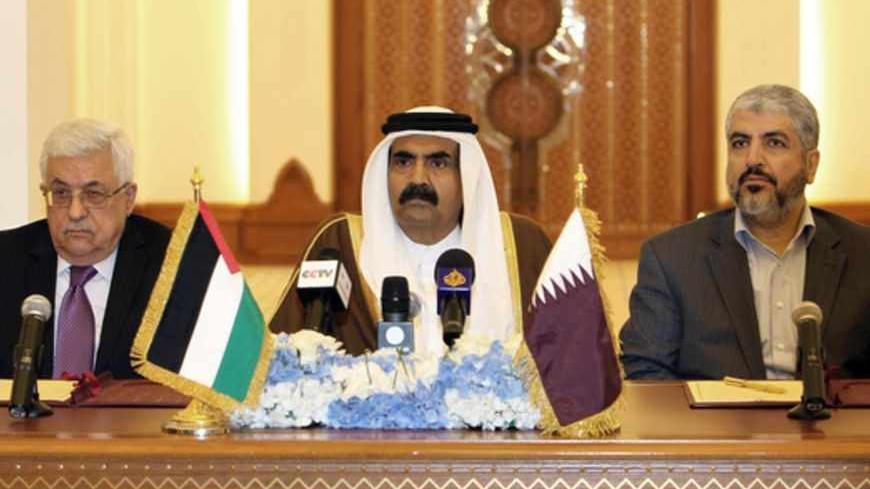 When Hamas decided to leave Syria — a consequential and historic decision — I was certain that no Arab country — including Arab Spring countries such as Egypt, Tunisia and Libya — would agree to host the organization on its territory for many considerations, including avoiding both angering the US and depriving that country’s Islamists of popular support as a result of them having Islamist Palestinian leaders among them.

So Hamas contacted Jordan and Sudan to see if either would open up its borders to it. They both refused — in a diplomatic manner — although they welcomed dozens of Hamas members who left Syria.

After Hamas leaders have become mostly aircraft-bound as they shuttle between Egypt, Jordan, Turkey and Sudan, making contacts to establish new bases for the movement, Hamas found new a geographic option that it had never considered: moving to Qatar.

Hamas’s relationship with Qatar goes back to when Israel blockaded the Gaza Strip after the movement won the 2006 elections. At the time, many countries chose not to help the Palestinians, but then Qatar, Turkey, Malaysia and some Arab and Islamic organizations mitigated the effects of the blockade. I have written a thorough study of Qatar’s aid to the Gaza Strip.

The relationship was given a boost at the Doha summit, which was held during the first Israeli war on Gaza in 2008 and 2009. The summit invited Hamas leader Khaled Meshaal to attend. For the first time, Meshaal sat next to Arab and regional heads of states, the most prominent of which were Qatari Emir Sheikh Hamad bin Khalifa Al Thani, Syrian President Bashar al-Assad, Iranian President Mahmoud Ahmadinejad and Turkish Prime Minister Recep Tayyip Erdogan. During the summit, Qatar announced that it would donate $250 million to repair the damage caused by the Israeli war machine. However, Hamas deemed the summit "incomplete and ineffective.”

Those developments made Qatar the main player in the Palestinian issue. Qatar deemed Gaza’s blockade unjust and immoral, which prompted the prime minister of the Hamas government in Gaza, Ismail Haniyeh, and a number of his ministers to thank Qatar for its continuous and “unconditional” support. Qatar then started providing political, material, humanitarian and charitable support.

Qatar financially supported Hamas with donations, grants and field projects (not cash, as Hamas wished) to compensate for the cessation of Iranian support, as Hamas leaders Meshaal, Khalil al-Haya and Sami Abu Zuhri had openly declared for the first time that the movement was financially suffering.

But Qatar’s support for Hamas was not limited to financial matters. Qatar also gave Hamas a regional role. Qatar was considered Hamas’s “godmother” in regional and international forums. Then came the visit by Qatar’s emir to Gaza in October 2012 and his call at the recent Arab summit in March 2013 for a mini-summit to discuss reconciling Fatah and Hamas. Fatah considered that move an attempt by Hamas to strip Fatah of the claim that it is the Palestinians’ sole representative.

Many who write about the relations between Qatar and Hamas fall into the trap of making unsupported claims. They say that Qatar’s support for Hamas comes not come without a price. Of course, I do not deny the existence of “political money” and Hamas is not so naive as to think that Qatar is a charity. But Hamas knows that Qatar’s policy is more balanced than that of the rest of the Arab Gulf states, despite the latter’s openness toward Hamas. But at the end of the day, Qatar, which hosts the most important US military bases in the region, cannot provide Hamas with the support it needs for military resistance.

So Hamas knows very well that Qatari support would never reach the level of the military aid Hamas enjoyed when it was allied with Iran. But military aid is Hamas’s most pressing demand, especially for its military wing, the Qassam Brigades. That subject was the focus of discussion between the movement’s two wings when they discussed their old and new alliances.

Hamas recognizes that although Qatar does not obey American dictates, as Qatar’s opponents claim, Qatar is not about to anger the US. Qatar knows its size and knows that its relationship with Hamas is limited to political and financial propaganda.

Moreover, the generosity and stability that Hamas enjoyed from Damascus and Tehran are much higher than what Qatar is providing. The Syrian and Iranian leaders never interfered in Hamas' decisions, despite the financial support and military training that they provided. But the most that Qatar can provide is to host some Hamas leaders without granting them freedom of movement to support Hamas’s military work in the interior.

There are great differences between Qatar and Syria when it comes to Hamas. The Hamas leadership in Damascus was able to travel throughout the country. Meshaal’s home in the Mezze neighborhood was very similar to the Syrian presidential palace in terms of security and Palestinian, Syrian and Arab visitors. I heard some Syrians say that Meshaal almost became the second man in Syria after Assad. This is something that Meshaal sacrificed for his principled backing of the Syrian revolution, and he paid for it dearly.

But the support that Hamas enjoyed from Damascus did not turn the movement into a Syrian puppet. Perhaps the break in relations between the two sides today proves that the allegations that the movement was subordinated to Syria and Iran to serve their projects in the region are false. And the same applies in the case of Qatar.

As of this writing, Qatar has not provided Hamas with 10% of what Syria gave the movement between 2000 and 2011. So Hamas is far from becoming an extension of Qatar’s policies in the region, especially with the presence of significant policy differences between the two sides. Qatar does not hide its relations with Israel, despite the closure of the Israeli commercial-representation office in Qatar.

Hamas’ relations with Qatar are putting the movement in an awkward position, which Hamas is trying to address. Hamas claims that it is making contacts with various Arab parties and is trying to establish positive relations with them regardless of their political or ideological inclinations. Hamas says that it is trying to encourage those countries to do their duty toward the Palestinians and support their just cause by mobilizing Arab public opinion.

At the same time, Hamas has refused to let anyone interfere in its internal affairs because the movement is not part of the Arab “internal” political system, nor is it part of the internal machinations of Arab countries. Qatar, whether it likes it or not, has become part of the regional Arab problem. Several Arab capitals — such as Riyadh, Cairo and Damascus — have reservations toward Qatar.

Hamas disagrees with Qatar with regard to the latter’s policies toward Israel and on how the solution to the Arab-Israeli conflict should look. Hamas does not seek to start side battles with Qatar, but does reserve the right to objectively express its opinion. Hamas criticizes some Qatari positions in order to establish a balance in the Hamas-Qatar relationship.

Perhaps the difficult situation that Hamas finds itself in as it moves from Damascus, which Hamas described as “the capital of resistance,” to Doha, which called for a “realistic” political solution with Israel, was also experienced by the PLO when it was expelled from Beirut (“the capital of the armed struggle”) in 1982 to Tunisia, when the latter was ruled by Habib Bourguiba. At the time, the PLO called for turning a page with Israel! Will history repeat itself despite the objective differences between the two cases?

Adnan Abu Amer is dean of the Faculty of Arts and head of the Press and Information Section as well as a lecturer in the history of the Palestinian issue, national security, political science and Islamic civilization at Al Ummah University Open Education. Follow him on Twitter: @adnanabuamer1.