Since Qatar has taken the initiative to play a greater regional role, especially regarding the Palestinian cause, many in the West Bank feel it seeks to undermine Fatah’s leadership, writes Hazem Balousha. 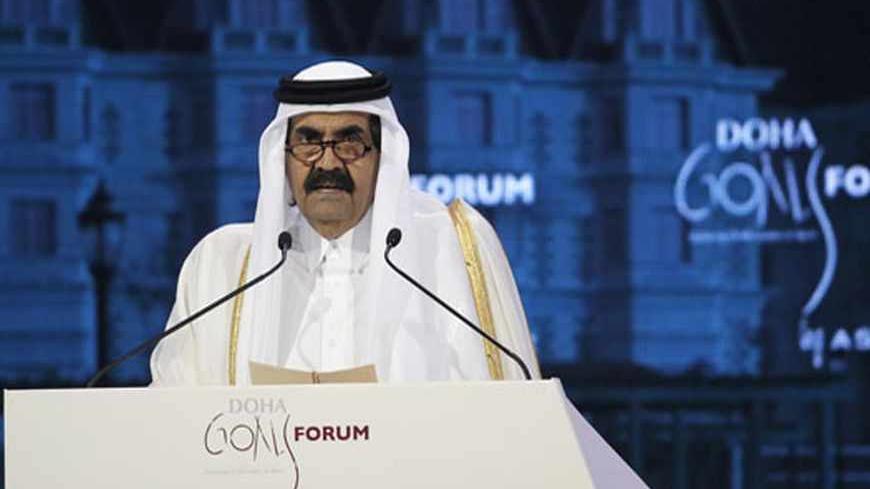 In an unprecedented step, Hamas has demanded its political rival Palestinian President Mahmoud Abbas to arrest the young men who burned an effigy of the Emir of Qatar in the city of Tulkarem in the West Bank. This has sparked a wave of severe criticism on the Palestinian streets because of the political rapprochement between the Islamic movement and Qatar.

In a press statement that was sent out to reporters via email, Sami Abu Zuhri, Hamas’ spokesman, said that “Hamas considers Abbas’ condemnation of the abusive act on the part of some Fatah-affiliated youth to the Qatari leadership not to be enough and does not relieve him from responsibility given the fact that he is the head of the Fatah movement. We condemn this irresponsible act and call upon Abbas to arrest the culprits in order to preserve our foreign relations. We consider this act to be the result of incitement on the part of some Fatah leadership to support certain Arab parties against others.”

The Emir of Qatar, Sheikh Hamad bin Khalifa al-Thani, was the most prominent Arab leader to visit the Gaza Strip in December of last year, and was elatedly received by Hamas as he announced the start of Qatari reconstruction projects in Gaza, which amounted to more than $450 million.

In an interview with Al-Monitor, Hamas’ spokesman in Gaza, Salah Bardawil, said that the [good] relations between Hamas and Qatar are the product of Qatar’s political and financial support for the Palestinian cause and the Gaza Strip.

He also stressed that Qatar was the only country to host the Hamas leadership before the movement moved its headquarters to the Syrian capital, Damascus. Qatar continued to receive the Islamic movement after the outbreak of the Syrian revolution. This is not to mention the financial aid the Gulf country has offered to the besieged Gaza Strip and its support for the Palestinian cause during different Arab summits, especially during the period of “Operation Cast Lead.”

The youth body of the Abbas-led Fatah movement designed a huge effigy of the Emir of Qatar only to hang it and burn it during the closing ceremony of the electoral campaign for the student council at Khadwari University in Tulkarem.

In a statement published by the official state news agency WAFA, the Palestinian president apologized for the incident.

“This act does not represent in any way the position of the state of Palestine, the PLO [Palestine Liberation Organization], the Fatah movement or the Palestinian people,” he said.

He added that “this act is directly contradictory with our people’s values and customs. We share a strong and close relationship with the state of Qatar, which cannot be damaged by some offensive attempts on the part of certain parties.”

For his part, Hani Habib, a political analyst in Gaza, has accused Hamas of implementing the Qatari policy in Palestine without any regard for Palestinian interests.

In an interview with Al-Monitor, Habib said “this is not a convergence of political positions between Hamas and Qatar, but a Qatari dominance at all levels, which is part of the country’s goal to impose its vision on the Arab system to draw a new map of the Middle East, where Qatar can play a major role.”

He added that “the danger lies in the fact that the exclusive relationship between Hamas in Gaza and Qatar deepens the political divide between the Gaza Strip and the West Bank, as Hamas has been feeling politically and financially empowered.”

It should be noted that ever since the outbreak of the Arab revolutions, there has been widespread criticism of the role of Qatar in Palestine, and of the rapprochement between the Muslim Brotherhood along with Qatar and Hamas, which has been clearly visible in the streets and on social networking sites such as Facebook and Twitter.

Moreover, Bardawil denied accusations that Hamas yields to Qatari policy, stressing that the relationship between both sides is a result of a political rapprochement “given Qatar’s advanced position toward the Palestinian cause, and we call upon the remaining Arab states to follow suit.”

Qatar has played a pivotal role in strengthening Hamas’ relationship with Arab and European countries. It has also supported the re-election of Khaled Meshaal as the head of Hamas’ political bureau during the recent elections that took place in the Egyptian capital, Cairo.

Qatar has also succeeded in mediating between Hamas and Jordan and achieved reconciliation between the two sides, when Meshaal met with Jordanian King Abdullah II in Amman, in the presence of the Qatari Crown Prince Tamim bin Hamad in January 2012.

Some of Hamas’ leaders have been living in Doha, after the Islamic movement moved out of Syria. Meshaal has been recently seen in a video and photographs, exercising in a gym at his house in Qatar.

Bardawil accused the Fatah movement and the Palestinian Authority [PA] in the West Bank of inciting ill feelings against Qatar. “The PA is jealous of Qatar’s political and financial support for Hamas,” he said.

Hazem Balousha is a Palestinian journalist, based in Gaza City, with a Master of International Relations from Turkey, as well as a BA in Journalism. He has worked as news producer for BBC World Service, as well as contributed to The Guardian (UK), Deutsche Welle (Germany), Al-Raya (Qatar) and many other publications. Covered serious events such as the internal conflict between Fatah and Hamas in 2007, and the Israeli Cast Lead war on Gaza 2008-2009. Hazem is also the founder of the Palestinian Institute for Communication and Development (PICD). Twitter: @iHaZeMi