Despite Fatah's large rally in Gaza and discontent with Hamas rule, Fatah still is unlikely to be able to challenge Hamas in Gaza, writes Hazem Balousha. 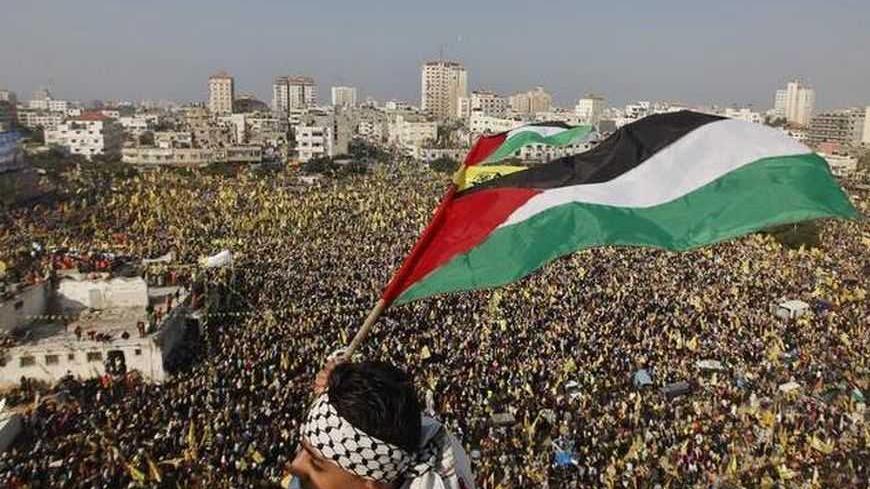 A boy waves a Palestinian flag during a rally marking the 48th anniversary of the founding of the Fatah movement, in Gaza City, Jan. 4, 2013. - REUTERS/Mohammed Salem

The high numbers that attended Fatah’s 48th anniversary rally in Gaza earlier this month stunned not only its rival Hamas, but also the Fatah leadership itself in the West Bank. It was Fatah’s first rally in the Gaza Strip since Hamas took power in the enclave in 2007.

Fatah's rally came less than a month after Hamas’ rally marking its 25th anniversary of Hamas, which was also held for the first time in a number of West Bank cities as a gesture by the Palestinian Authority toward reconciliation.

The anniversary was also judged as a referendum on Fatah’s popularity in Gaza, while others analyzed the turnout in relation to Hamas’ own popularity in the territory it rules. The rally has shown that Hamas cannot claim to be the only popular force in the coastal strip.

"Hamas's failure to provide a decent life for Palestinians after nearly six years in power in the Gaza Strip made people feel it was time for change. They wanted to deliver a message to Hamas that their rule in Gaza is not guaranteed and that they are tired of slogans when it comes to solving problems and removing obstacles,” Yehya Rabah, a senior Fatah leader in the Gaza Strip, told Al-Monitor.

Fatah feels it can compete with Hamas in Gaza after comparing the turnout of the two rallies, but the secular faction is still no match for the Islamists militarily, particularly the rise in regional support for Hamas since the November war.

Fathi Sabbah, Gaza correspondent for Al-Hayat newspaper, believes that Fatah as a movement does not exist in the Gaza Strip, but its supporters still remain.

"The number of participants in the festival does not mean that Fatah is strong. What happened is quite normal after five years of repression and prevention, so it was natural for hundreds of thousands to participate in the festival," Sabbah said.

Hamas banned all Fatah activities in the Gaza Strip in response a similar ban on Hamas imposed by the Palestinian Authority in the West Bank shortly after the violent division in 2007.

"A large part of people participated in the protest as a message against the policies of Hamas. These people do not belong to Fatah, but encourage it to regain their ability to work and form a parallel to Hamas,” Sabbah said.

The rally was more a reflection of the desire for an end to “unipolar” politics in Gaza, where political life has been suffocated due to the Palestinian split, according to Sabbah.

“People want to see Fatah return strong, and deliver a message to Hamas: enough of these policies, enough of this oppression and violations of human rights and public freedoms," he said.

But there is no guarantee Fatah will ever return as an influential force in Gaza. The movement is riddled with its own internal divisions, which widened after the death of former leader Yasser Arafat. Fatah also suffers from an aging leadership and a failure to bring in younger generations into its leadership circle, while Hamas boasts a relatively younger generation of leaders. It is one reason why ex-Fatah strongman Mohammed Dahlan still retains popular support, compared to the older Fatah leaders, despite his dismissal from the organization over disagreements with Palestinian Authority head Mahmoud Abbas.

Rabah believes the problem stems from Fatah’s internal regulations, which are still not developed to accommodate a new generation in the leadership structure, despite the recommendations made during the sixth conference in 2009.

"Fatah suffers from an overcrowding of generations and there is no space to develop the leadership levels. There has yet to be an agreement on a way to open the paths of leadership, or bridge the lack of understanding between the generations within the movement," Rabah explained.

Most Fatah leaders in Gaza fled after Hamas came to power, with others arrested by the Islamist movement on suspicion of communication with their leaders in the West Bank.

Fatah is betting on the failure of Hamas’ governance in Gaza to win any upcoming elections, should reconciliation efforts produce results. This is despite its own failure in political negotiations with Israel.

But for Fatah to stand a chance in any election fight with Hamas in Gaza, it needs to get its house in order and build on the success of its rally.

"To be able to invest the success of recent 48th festival, Fatah must do two things: first, internal reconciliation with Dahlan; second, the reconstruction of the movement in the Gaza Strip. Without ticking off these two conditions, Fatah will continue to disintegrate [in Gaza]," Sabbah said.

Fatah may succeed in pointing out the failures of Hamas rule in Gaza, particularly where it concerns quality of life and issues on rights and civil liberties. But in its current position, lacking any major political achievement on the ground and with the Palestinian Authority struggling financially, Fatah will not be able to defeat Hamas democratically in Gaza.

Hazem Balousha is a Palestinian journalist, based in Gaza City, with a Master of International Relations from Turkey, as well as a BA in Journalism. He has worked as news producer for BBC World Service, as well as contributed to The Guardian (UK), Deutsche Welle (Germany), Al-Raya (Qatar) and many other publications. He has covered serious events such as the internal conflict between Fatah and Hamas in 2007, and the Israeli Cast Lead war on Gaza 2008-2009. Hazem is also the founder of the Palestinian Institute for Communication and Development (PICD). Twitter:@iHaZeMi.