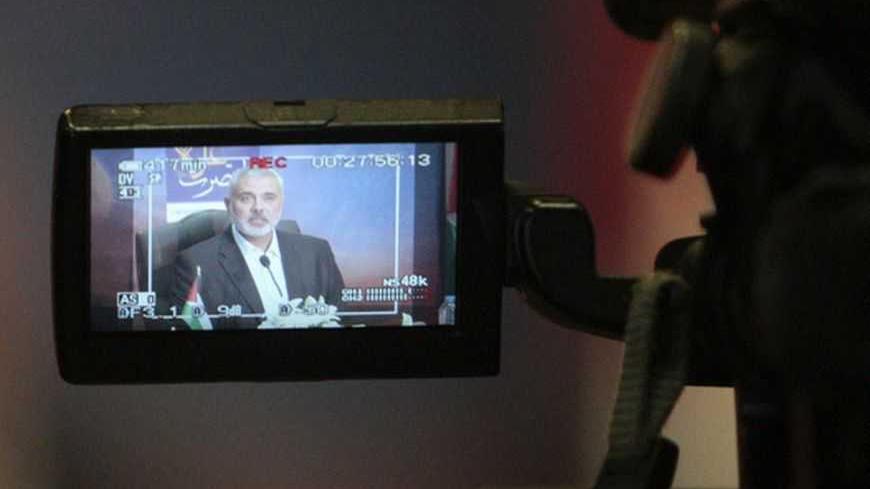 Senior Hamas leader Ismail Haniyeh is seen on a video camera as he delivers a speech after an eight-day conflict in Gaza City, Nov. 22, 2012. - REUTERS/Ahmed Zakot

The local Palestinian media lack boldness in tackling sensitive issues. They merely focus on political news and reports, without getting into serious investigations that touch upon the concerns of the people, corruption cases or the stories of suffering that might criticize the performance of the ruling organizations. The situation is not made any better by the political pressure arising from the Palestinian status quo, torn by the divisions and political bias of most media channels.

The political division that led to the formation of two almost separate entities in the West Bank and the Gaza Strip urged Palestinian journalists to establish two syndicates that fight over the right to represent the press. One of the syndicates is in the Gaza Strip and includes Hamas and Islamic Jihad journalists, while the other is in the West Bank and includes the journalists of Fatah and the other factions of the PLO.

Since Hamas took over in 2007, Gaza has witnessed a series of violations against Palestinian journalists and media organizations. As a result, a large number of journalists have been arrested, while others have been called in for interrogation. Most media affiliated with the Palestinian Authority and Fatah have been shut down, and their correspondents forbidden from working in Gaza.

With the launch of the reconciliation negotiations between the adversaries in Hamas and Fatah, Hamas allowed the media correspondents based in the West Bank to work again. However, Hamas still bans the distribution of Palestinian dailies Al-Quds, Al-Ayam and Al-Hayat al-Jadida, in response to the Palestinian Authority (PA)'s ban on the distribution of newspapers issued in Gaza in the West Bank, like the Palestine Daily and Al-Resalah, which comes out in the middle of every week.

Salama Maarouf, general manager of the governmental media office in Gaza, describes the freedom of the press in Gaza as being in a much better condition compared to how it was during PA rule. The government has a general inclination to protect the rights of journalists and media organizations, thus providing a relatively free work environment.

Maarouf blamed the occasional abuses against journalists on the miscalculation of some individuals in the Ministry of Interior, not on a philosophy aiming to undermine the freedom of the press. He praised the situation of freedoms in Gaza, compared to the West Bank, where “journalists are condemned due to comments they post on Facebook.”

He added, “Gaza has seen remarkable progress in the freedom of the press and the media and their work, but we still haven’t reached the ideal situation that we aspire to. Yet, compared to the past, there have been very positive developments.”

The security services in Gaza recently arrested a group of journalists, most of whom work on local websites, on the grounds of derailing “the reconciliation environment” through spreading rumors on their websites. The journalists were released later under pressure from civil and rights organizations, although some of them appeared before military courts.

The 2011 report of the Palestinian Center for Development and Media Freedoms (MADA) reported 62 violations against journalists and media organizations in Gaza, as opposed to 53 violations in 2010. The violations ranged from travel and insurance bans to abuse, threats, investigation and interrogation.

Maarouf said, “Some violations committed against journalists were a result of mistakes. We have formed investigation committees to look into the accidents. Following each investigation with the journalist concerned, the results are issued. Recently, a permanent committee between the Ministry of Interior and the governmental media office was formed to solve the problems that might face the media’s work, and its recommendations are binding to the executive sides.”

The Palestinian media are divided into three types: governmental media, media affiliated with or financed by Palestinian factions and independent media, whose finances rely on the weak local economy.

Adel al-Zaanoun, director of Gaza Center for Media Freedom and correspondent for AFP, pointed out that the abuses of the media are more a result of the prevalent culture in society than of a public governmental policy.

He said, “The declared slogans and politics and the laws, weak as they are, encourage the freedom of the media. However, their effective application is different from the politicians’ declared views. To achieve change, the general performance and culture of the various official organizations must be developed.”

Zaanoun dismissed the idea of direct censorship from the government in Gaza on the media and the journalists. However, personal censorship, which has increased throughout the years, limits the freedom of journalists in tackling topics boldly and presenting them intensely.

The Ministry of Interior and the governmental media office have been imposing, for the past year and a half, prior entry permits on non-Palestinian foreign journalists willing to come to Gaza. The permits must be shown at the registration offices on the only two crossings for individuals, Erez and Rafah.

Maarouf justified the decision to require prior permits for foreign journalists, contrary to the practices of the past years, by saying that “this is a governmental, political and sovereign decision, and it affects all non-Palestinians willing to enter the Strip, not only journalists. The procedures of journalist entry are considered among the easiest, since they get done within 24 hours at most. In urgent cases, the procedure only takes a couple of hours.”

There are no accurate statistics for the number of journalists working in Gaza Strip. However, local estimates indicate that around 2,000 journalists work in local, Arab and foreign media there. Two TV channels broadcast from the Gaza Strip, while 15 local stations diffuse their material over short wavelengths. Three periodic newspapers are issued, in addition to an unknown number of news websites.

The abuses against journalists are linked to the political incidents in Gaza under the weak but applicable Palestinian Press and Publications Law of 1995, which was established to keep up with the rapid media evolution. Another factor harboring the justification of most abuses is the political division and its exploitation for that purpose, depending on the political affiliations of journalists.

Hazem Balousha is a Palestinian journalist based in Gaza City. He has worked as news producer for BBC World Service, as well as contributed to The Guardian (UK), Deutsche Welle (Germany), Al-Raya (Qatar) and many other publications, and covered serious events such as the internal conflict between Fatah and Hamas in 2007, and the Israeli Cast Lead war on Gaza 2008-2009. Hazem is also the founder of the Palestinian Institute for Communication and Development (PICD). Twitter:@iHaZeMi