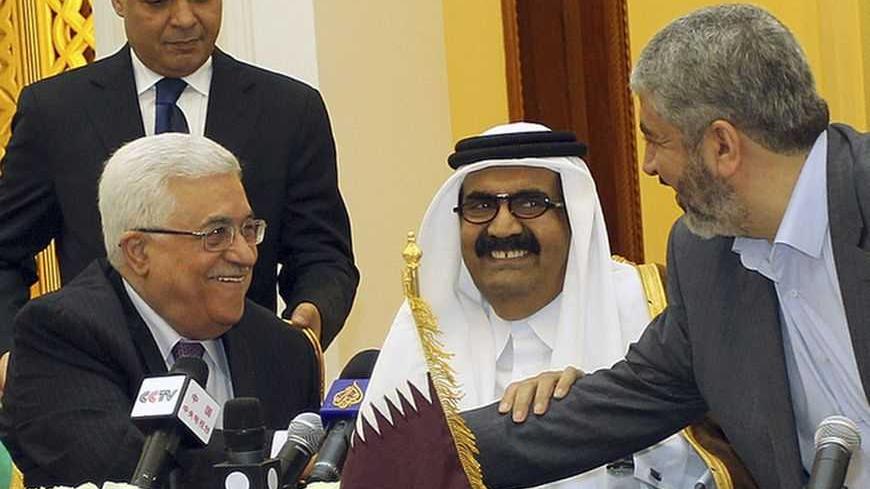 Palestinian hopes of achieving a genuine breakthrough in concluding reconciliation and political unity between the West Bank and the Gaza Strip during recent talks went up in flames with another Fatah-Hamas dispute. These talks were expected to end division, form a unity government and issue a decree setting the date for general elections.

In Cairo, participants in the meeting failed to address the issue of reconciliation. The meetings, held under the auspices of the Egyptian General Intelligence Services (GIS), aimed to bring Hamas and Fatah to the discussion of what has been agreed upon previously, waiting to adopt mechanisms for implementation.

The meetings of the follow-up committee, which includes Moussa Abu Marzouk from Hamas, Azzam al-Ahmad from Fatah, and Nader al-Aasar, a representative of the GIS — in addition to the participation of Palestinian President Mahmoud Abbas and Hamas Political Bureau Chief Khaled Mashaal in recent meetings — witnessed new differences over the PA presidential and parliamentary election date, which coincide with the PLO national council elections, and regarding a shift  towards a fully proportional representation, after a mixed system was agreed upon consisting of 75% proportional representation and 25% individual seats.

An official source, who wished to remain anonymous, revealed that Abbas requested to limit the unity government’s term to three months, ending with the elections in the Palestinian territories. This request was rejected by Hamas, which demanded the term of the government to be at least six months, based on the 2009 Cairo Accord.

Fatah and Hamas signed a series of agreements in several Arab capitals, most recently the Doha Declaration in 2012, which stipulates that Abbas would head a government of independents. This issue was problematic when applying the Palestinian reconciliation accord, signed in Cairo in 2009 and its mechanisms of implementation in 2011.

During recent meetings, Hamas insisted on a government of technocrats headed by Abbas, according to the Cairo accord, rather than a government of independents as stipulated by the Doha Declaration. This would allow it to appoint experts that may be affiliated with it as ministers, which was rejected by Fatah.

Another point of difference emerged over the three elections coinciding with each other. While Hamas demands presidential, parliamentary and PLO national council elections to be held on one day, Fatah wants the PA elections to be separated from that of the PLO.  Each party excelled in interpreting the term “coinciding” in the signed agreements.

The same source added that Fatah suggested that the Central Elections Commission should oversee all electoral processes on the domestic arena and in the diaspora, whereas Hamas rejected the idea that the same commission should oversee the national council elections for Palestinians abroad, and justified that by saying that it is linked to the PA and that the PA and PLO institutions should be separated.

On the issue of freedom, Abbas suggested to resolve the issue immediately following the formation of the government, whereas Hamas insisted that it should be solved before a government is formed in order to allow it to freely prepare for the elections in the West Bank, by opening its closed institutions, releasing political prisoners, and allowing its members to work freely.

Al-Haya added: “Despite all the obstacles we face, Hamas is keen to achieve reconciliation, and the atmosphere must remain positive. Reconciliation did not regress nor stall. The Cairo talks are a step on the road to reconciliation, however slow that road may be.”

On the social reconciliation issue — which involves compensating the families of victims in the fighting between Fatah and Hamas in 2007 — Abu Mazen justified his failure to pay by the severe financial crisis in the PA, while Hamas brought up Morocco and South Africa’s initial approval to pay the compensation.

The leaderships of the rival movements exchanged accusations in the media and blamed the other for the failure of the talks to address reconciliation. Hamas pretends that Fatah links the reconciliation to US approval, whereas Fatah says that the rival movement does not want any implementation and looks forward to continuing its control over the coastal strip.

The meetings of the interim leadership, formed according to the 2005 Cairo declaration, discussed mechanisms to activate the PLO and the PLO National Council Election Law. The leadership is headed by the PA president and PLO chairman, and includes the membership of the PLO national council (PNC), Palestinian factions’ secretaries-general, along with independent figures.

The official source explained that the Palestinian president ignited a heated dispute in his opening speech by saying that all factions accept the principle of a two-state solution. Khaled Mashaal and Ramadan Shallah objected, and said that their movements refused as this would explicitly recognize Israel, and that Hamas accepted a Palestinian state within the 1967 borders, without recognizing Israel.

Participants from the leadership at the meeting agreed on fully proportional representation in the national council elections, however, they disagreed on the number of constituencies. While Fatah called for adopting two constituencies — one representing the domestic arena, and the second representing Palestinians abroad — Hamas wants the diaspora to be divided into eight constituencies.

Despite the Palestinian public having limited expectations for reconciliation between Hamas and Fatah, hopes of achieving reconciliation increase with every new round of talks. Yet, the two governments’ actions on the ground reflect to what extent they seem to keep the situation as it is.

Hazem Balousha is a Palestinian journalist based in Gaza City, with a Master of International Relations from Turkey, as well as a BA in journalism. He has worked as a news producer for BBC World Service, as well as contributed to The Guardian (UK), Deutsche Welle (Germany), Al-Raya (Qatar) and many other publications. He has covered serious events such as the internal conflict between Fatah and Hamas in 2007, and the Israeli Operation Cast Lead war on Gaza 2008-2009. Hazem is also the founder of the Palestinian Institute for Communication and Development (PICD). Twitter:@iHaZeMi