Violence and lawlessness are on the rise in Gaza, reports Hazem Balousha. 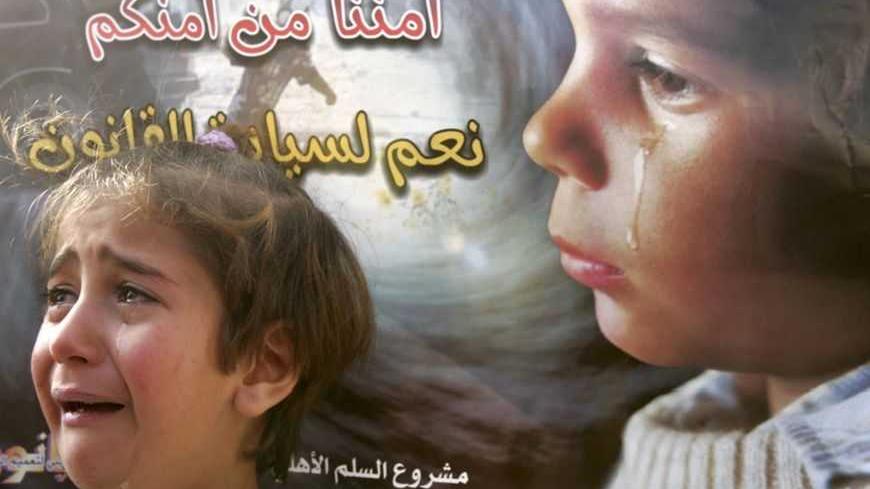 A Palestinian girl cries as she attends a rally protesting Monday's killing of the three sons of a Palestinian intelligence chief loyal to President Mahmous Abbas in Gaza, Dec. 13, 2006, in front of a poster depicting a schoolmate of the slain children.

Violence has been rife in Gaza but reached its peak in mid-2007, when clashes erupted between political rivals Hamas and Fatah, in a battle that resembled a civil war that left many wounded and dead. The Gaza Strip has also suffered from military confrontations with Israel, not to mention the political and economic blockade, which has led to increased violence in Gazan society.

The coastal enclave suffers from high population density, given the limited area of 360 square km [138 square miles], inhabited by nearly 2 million people.  In addition, 70% of refugees, nearly half a million people, live in eight camps set up by the United Nations Relief and Works Agency for Palestine Refugees (UNRWA).

According to Issam Younis, the general director of Al Mezan, violence in its various forms — be it physical or behavioral — continues to grow as a result of the exceptional circumstances prevailing in the Gaza Strip. This is especially true in view of population density, the political circumstances, the geographical and political blockade as well as the ongoing conflict between different Palestinian political factions.

“The Palestinian territories are going through a state of political polarization. The fact that each political party has been claiming to be in the right has been reflected in the people’s behavior, whether before or after the division. Nevertheless, violence in society has significantly escalated, when political factions began to manipulate society for their own interests, inciting people against each other,” he said.

UN statistics show that the rate of poverty and unemployment exceeds 40% in the Gaza Strip, due to the economic blockade and limited job opportunities, especially among young people and new graduates. This is likely to lead to an increase in crime, violence and drug abuse.

Furthermore, according to university lecturer Mohamed Farhat, “poverty is fertile soil for crime. One can clearly observe the expansion of crime in the Palestinian society as resulting from increased poverty. We should not perceive crimes taking place in society as an individual act. These crimes reflect a profound social crisis.”

Gaza’s security conditions are the product of recurring military confrontations with Israel, especially the infamous Operation Cast Lead in 2008-09 and Operation Pillar of Cloud in 2012. As a result of these two aggressions on Palestinian territories, hundreds of people were killed and wounded, houses were demolished and farmlands destroyed. This has taken its toll on the mental health of different segments of society.

A study carried out by the Gaza Community Mental Health Program (GCMHP) showed that as a result of the blockade and wars on the Gaza Strip, violence has significantly increased, especially among children. Moreover, according to the GCMHP psychological treatments and studies, students tend to use violence outside school, as they often engage in fist or stick fights, not to mention the widespread verbal abuse among them.

Another study also by the GCMHP that was carried out following the recent aggression in November showed that the attack had a negative impact on student achievement in schools and their motivation to learn, which decreased by 48% and 52% respectively. The students’ level of concentration has also dropped by 50%. The level of violence, on the other hand, has increased by 52%. The level of frustration and fear of future has risen by 40%.

Moreover, the political culture of different Palestinian factions has been reflected in the behavior of Palestinian society. Political factions have sought to instill their own dogmas, rejecting those of others, each trying to shun the other in an attempt to impose their own political platform and program.

Following its inception in 1994, the Palestinian Authority revived tribalism in the Gaza Strip. The PA has been seeking to expand its power despite widespread conflicts with Palestinians, in an attempt to control all the pillars of society, after tribalism had vanished following the first intifada.

Following the political separation of the Gaza Strip from the West Bank in 2007, the local Palestinian media took a supportive stance in favor of the political adversaries without any regard to social or psychological considerations. The media fueled hatred in society according to political stances in order to gain support.

Younis added that “Palestinian society is unable to live normally because of the abnormal conditions they are in, such as the blockade, interfamily fear and conflicts, not to mention the lack of resources, poor prospects for development, and the inability of Palestinian institutions to ease violence and spread a culture of tolerance in the community.”

“The Palestinian environment is fertile soil for violence. People tend to take the law into their own hands as Palestinian authorities continue to fail to put an end to violence, despite the millions of dollars that are being spent on projects to reduce violence in society,” he added.

With the persistence of poverty, unemployment and the use of media for personal interests on the part of political factions, not to mention failure to reach reconciliation, Palestinians in the Gaza Strip will continue to live in a society rife with violence despite all security measures to quell crimes and other form of violence.

Hazem Balousha is a Palestinian journalist based in Gaza City. He has worked as a news producer for BBC World Service, as well as contributed to The Guardian (UK), Deutsche Welle (Germany), Al-Raya (Qatar) and many other publications. He has covered the internal conflict between Fatah and Hamas in 2007, and the Israeli Operation Cast Lead war on Gaza 2008-2009. Hazem is also the founder of the Palestinian Institute for Communication and Development (PICD). Twitter:@iHaZeMi