Months after the Egypt-brokered cease-fire between Israel and Hamas, both sides seek to maintain peace in Gaza for political and other motives, writes Hazem Balousha. 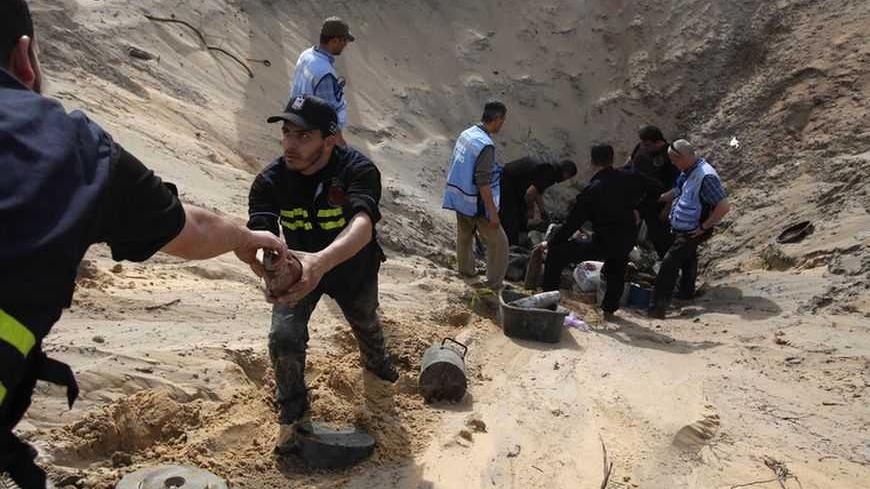 Members of the Hamas security forces and United Nations international experts prepare to destroy the remains of ordnance from an eight-day conflict between Israel and the Palestinians in 2012, in Rafah in the southern Gaza Strip, Feb. 25, 2013. - REUTERS/Ibraheem Abu Mustafa

After the Egyptian-sponsored truce was forged between Hamas and Israel, the situation in Gaza returned to the status quo that existed prior to operation Pillar of Defense, which was launched against Gaza in November 2012.

While the ceasefire prevented rocket fire on Israeli towns, there was no change regarding the blockade imposed on the Palestinian enclave.

Despite the implementation of the deal, Israeli aggression on the coastal strip has continued. According to the Al-Mezan Center for Human Rights, Israel has carried out strikes against different areas of the Gaza Strip — especially in the security buffer zone along the eastern border and along the Mediterranean Sea, which killed four people and injured 86. Moreover, 80 Palestinians were arrested, half of whom were fishermen, and Israeli soldiers infiltrated some of the border areas.

Furthermore, Israel has maintained its restrictions on the entry of goods into the Gaza Strip. Construction materials continued to be banned from entering the Palestinian enclave, except for limited quantities allocated for international projects, transferred through the Karam Abu Salem (Kerem Shalom) commercial crossing. Israel also restricted Palestinian fishermen to an area of three nautical miles from shore, despite the fact that the Oslo Accords provided access to up to 20 nautical miles from shore.

Incidentally, a rocket was launched from the Gaza Strip against Israel for the first time on Tuesday [Feb. 26]. Al-Aqsa Brigades, which are affiliated with Fatah, claimed responsibility for the attack, while the Hamas government denied that they had fired any rockets following Israel’s closure of the Kerem Shalom and Erez crossings in violation of the truce agreement.

There have been conflicting views as to whether this relative calm in the Gaza Strip will last, in terms of confrontation with Israel. While many pundits believe that the last assault was merely another round of fighting between the two sides, others feel that the Pillar of Defense was crucial in promoting a long-lasting calm.

According to Saleh al-Naami, a reporter for the daily Asharq Al-Awsat in Gaza, the current status quo of the strip suggests that the calm is likely to last in light of the unwillingness of both Israel and Hamas to reignite the situation.

“Israel is convinced that no strategic aims can be achieved in Gaza without complete occupation of the entire Strip, which is totally rejected by all military and political circles. This is not to mention the ongoing international pressure on Israel. Moreover, Israel has to deal with more important issues, such as Iran, Syria and Hezbollah in Lebanon,” Naami said.

He added that “due to Hamas’ political victory in the Pillar of Defense operation, Hamas managed to tighten its grip on other Palestinian factions, preventing them from sparking new confrontations with Israel, dragging Gaza back down into the pit of war.”

To boost its popularity, which has decreased over the years of blockade, Hamas has been seeking to develop infrastructure in Gaza through Qatari and Islamist funds, after being banned for many years by Israel and Egypt from bringing in any construction materials.

In a statement issued during recent conference in Gaza, Ismail Haniyeh, head of the Hamas government, said that “Gaza is doing its job. It is defending Palestine — all of Palestine. In the future, we ought to resolve the conflict with the occupying forces in the West Bank, [for the sake of] of the Palestinian people in the diaspora.” This has explicitly reflected Hamas’ unwillingness to engage in any future confrontation with Israel.

Haniyeh added that Hamas is seeking to change its defensive resistance into “a comprehensive strategy for liberation,” based on the conviction that the Gaza Strip is a liberated zone and that all Palestinian factions ought to join hands to liberate the rest of the Palestinian territories.

The current calm in Gaza is reminiscent of the status quo following the Cast Lead operation against the strip in 2008-2009. This calm was short-lived, as the Israeli shelling of Palestinian areas was resumed and Palestinian rockets were again fired into southern Israel.

Naami, however, said the current circumstances differ from the situation during the period following Operation Cast Lead, both domestically and in the Arab world. This is especially true in light of the Islamists’ rise to power and Hamas’ willingness to stabilize the security situation in the Gaza Strip, which would allow Islamist movements — especially in Egypt — to strengthen their influence. What’s more, Israel would also benefit from a stable situation on its border with Egypt.

The Israeli military operation against the Gaza Strip failed to enjoy wide acclaim during the recent Israeli parliamentary elections, despite the attempts of Prime Minister Benjamin Netanyahu to promote his powerful abilities to safeguard Israel’s security against Hamas.

According to an Israeli study issued by the Begin-Sadat Center for Strategic Studies (BESA), following the eight-day war on Gaza, Hamas and other Palestinian factions will soon regain their strength and restore their military capability and that it is only a matter of time before the next round of fighting starts again. This is especially true as Israel failed to impose its control over the entire Gaza Strip, which allowed some Palestinian factions to smuggle arms into Gaza and provoke the Jewish state.

In light of the fact that many parties and sides involved in the Gaza Strip, which is located in the unstable Middle East, and because of the international community’s rejection of the Hamas government, it is difficult to predict the future situation in the Gaza. Nevertheless, one thing's for sure at the moment: Both sides are seeking to maintain calm for as long as possible.

Hazem Balousha is a Palestinian journalist based in Gaza City, with a Master of International Relations from Turkey, as well as a BA in journalism. He has worked as a news producer for BBC World Service, as well as contributed to The Guardian (UK), Deutsche Welle (Germany), Al-Raya (Qatar) and many other publications. He has covered serious events such as the internal conflict between Fatah and Hamas in 2007, and the Israeli Operation Cast Lead war on Gaza 2008-2009. Hazem is also the founder of the Palestinian Institute for Communication and Development (PICD). Twitter: @iHaZeMi