Israel's apology to Turkey is welcomed by Palestinians including Hamas and raises expectations for a lifting of the blockade on Gaza, writes Hazem Balousha. 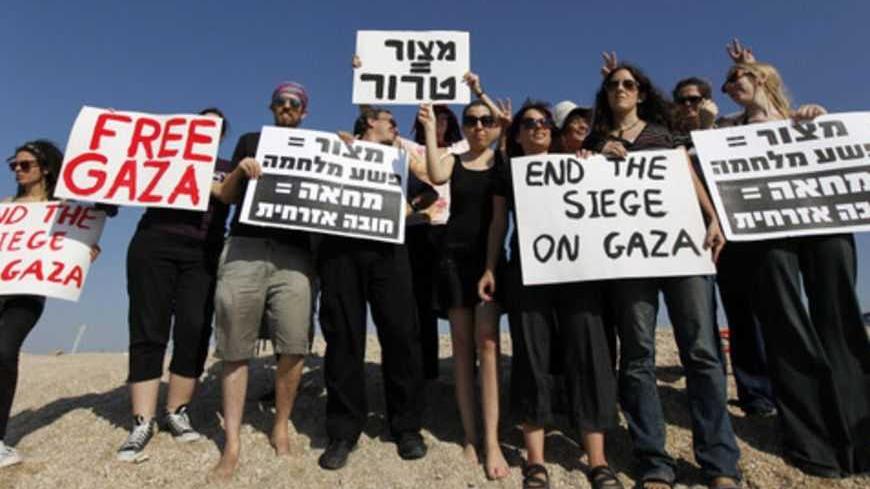 Israeli activists hold signs in support of Gaza near the entrance to the port of Ashdod, Oct. 20, 2012. The Israeli navy had earlier seized an international pro-Palestinian activist ship in the Mediterranean sea to prevent it breaching its blockade of the Gaza Strip. - REUTERS/Amir Cohen

Following US mediation, personally led by President Barack Obama during his visit to the region, Israel and Turkey have finally renormalized their diplomatic relations.

This new Israeli-Turkish agreement brought to mind the Israeli attack on the Freedom Flotilla, where nine Turkish activists on board were killed on May 31, 2010. This attack was what pushed Israel to ease its blockade of the Hamas-controlled Gaza Strip. Hamas welcomed Israel’s apology, in the hope that Turkey would continue with its pressure to further ease the blockade.

The head of Hamas’ foreign relations department, Bassem Naim, said in an interview with Al-Monitor, that “this apology represents a major milestone in the history of the Israeli-Arab conflict in the region, since it is the first time Israel has offered an apology of this kind.

“Israel’s crimes against humanity can no longer be overlooked in light of the emergence of a powerful and respectable state such as Turkey, whose new diplomacy is based on solid ground,” he added.

Turkey had imposed three conditions on Israel as a prerequisite to exchanging ambassadors and normalizing relations between the countries. First, Israel must offer an apology, compensate the victims’ families and lift the blockade on the Gaza Strip.

It should be noted that Israel has maintained economic constraints on the Gaza Strip by shutting the commercial crossing of Karam Abu Salem (Kerem Shalom), after militants in Gaza recently fired rockets at Israeli towns. Israel has also restricted fishing areas in the Mediterranean, violating the stipulations of the Oslo Accords in this regard. Additionally, movement through the Erez crossing has been limited.

According to Naim, Israel will try to evade Turkey’s condition of lifting the blockade on Gaza by misleading the public and Turkey, claiming that it has [already] been allowing goods to enter the area freely.

Hamas has avoided criticizing Turkey, which it considers a key political backer in order to reestablish diplomatic relations with Israel, especially after the latter apologized for killing Turkish activists in the MV Mavi Marmara incident. Nevertheless, Hamas implied that it does not wish to interfere in Turkey’s affairs.

“We call on all Arab, Islamic and Western countries to boycott Israel because it has been committing crimes and practicing state terrorism in violation of international law. Israel should be held accountable for its actions against the Palestinian people, whether domestically or abroad,” said Naim.

In an indication that Hamas justifies Turkey’s position, Naim added, “In light of the political status-quo, we are well aware that this is the best position Turkey can take. We believe that Turkey’s new stance is based on solid ground. Turkey’s solidarity [with us] has been demonstrated on more than one occasion, which we cannot forget.”

For his part, Jamal al-Khodri, a member of the Palestinian Legislative Council and head of the Hamas-affiliated Popular Committee Against the Blockade, expressed satisfaction in an interview with Al-Monitor with Netanyahu’s apology, calling it “a major achievement.” He also expected a breakthrough in the blockade imposed on the Gaza Strip, should the Israeli side commit to the conditions, under severe international pressure.

Khodri added that the US has succeeded in restoring ties between the two countries as it is well aware of the importance of Turkey’s role in the region. This move also comes within the framework of US efforts to focus on the Iranian nuclear issue and on solving the Syrian crisis.

The Islamic Jihad movement, on the other hand, has gone far in criticizing the renormalization of relations between the two countries.

“Suggesting that this apology is a victory for Turkey is false and untrue. Israel will not lift the blockade on Gaza as a result of this apology, which only benefits the Zionist enemy. Israel will force the Turkish government to open its territories and airspace to Israeli air forces and joint military exercises, pursuant to the conditions of NATO membership, and to bring together [proponents of] moderate Islam, according to the American perspective,” said Khaled al-Batsh, a leader in the jihadist group, in an interview with Al-Monitor.

On Friday [March 22], Turkish Prime Minister Recep Tayyip Erdogan called President Mahmoud Abbas and Khaled Meshaal, head of the Hamas political bureau, to inform them of the agreement that was forged with Netanyahu regarding the Freedom Flotilla incident.

Moreover, in a press statement, Hamas said that Erdogan assured Meshaal that Netanyahu apologized on behalf of Israel and has pledged to implement the remaining Turkish conditions, namely to compensate the victims’ families and lift the blockade on the Gaza Strip. Separately, Reuters reported Israeli officials on March 24 denied that the country had committed to completely ending its blockade as part of the reconciliation.

Incidentally, it is worth noting that Turkey, led by Erdogan, has politically embraced Hamas through receiving dozens of its members in Turkish cities, especially those who fled Syria. Ankara has also welcomed many prominent leaders in Hamas, who are banned from entering the US and European territories, and supported their efforts to alleviate Israeli and Western pressure on Gaza.

Hazem Balousha is a Palestinian journalist based in Gaza City with a masters degree in international relations from Turkey as well as a BA in journalism. He has worked as news producer for BBC World Service and Deutsche Welle (Germany), as well as contributed to The Guardian (UK), Al-Raya (Qatar) and other publications. Balousha covered the Israeli Cast Lead war on Gaza in 2008-2009 and the internal conflict between Fatah and Hamas in 2007. He is also the founder of the Palestinian Institute for Communication and Development (PICD). Twitter:@iHaZeMi