The United Nations Relief and Works Agency in Gaza faces increasing difficulty in carrying out its work, as the Hamas-led government claims some of its activities are not in line with the Strip’s Islamic culture and values, writes Hazem Balousha. 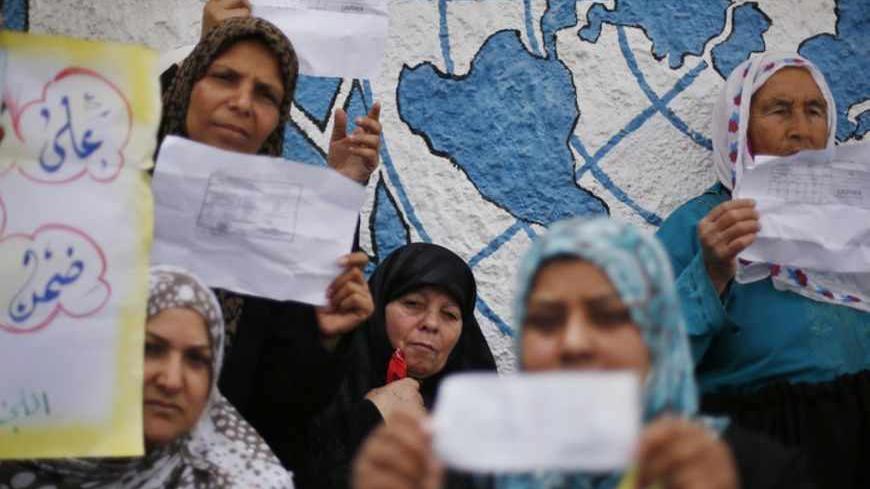 Tensions have flared between the United Nations Relief and Works Agency for Palestine Refugees in the Near East (UNRWA) and the Hamas movement, following activities carried out by the international organization that the Islamic movement considered to be outside the scope of its humanitarian functions, which should be limited to providing relief and social services.

Issam Adwan, head of the Hamas-affiliated Refugee Affairs Department, said in a video posted on YouTube by the department, that UNRWA has been organizing trips for refugee school students from Gaza to the US and Europe. “The UNRWA yields to the demands of Western countries. It does not have our best interest at heart. Therefore, we ought to cautiously deal with its projects,” he said.

In the video, titled “UNRWA’s suspicious trips,” Adwan said that the movement has objected to the trips organized for adolescent students for  five “psychological” reasons. According to the Islamic movement, “Students will be dazzled by these new places and would dream of returning there to enjoy themselves again. They would lose their sense of nationalism and become detached from their social values. They would feel a sense of defeatism and inferiority and would have difficulty adapting to reality and reintegrating into their society.”

The UNRWA canceled a marathon that was scheduled to be held in Gaza, when the Hamas government banned women from participating in it. Moreover, the international organization has included in students’ curriculum a human rights article, which, according to Hamas, is in direct conflict with the Islamic faith as it promotes personal freedom and the right to choose one’s own religion. This has sparked controversy and an exchange of accusations between Hamas and UNRWA.

Hamas has accused UNRWA of trying to influence the culture of the Palestinian students by organizing trips to Holocaust sites, as well as teaching them a subject on human rights, which includes a reference to the Holocaust in such way that portrays Israel as the victim in their eyes.

In an interview with Al-Monitor, Moin Abu Awkal, head of the Refugees Department in Hamas, said that “the UNRWA’s performance has begun to decline recently. While it has announced that it will reduce the basic services it provides, which was the main reason for its establishment, the organization has decided to organize irrelevant trips abroad and to grant awards for outstanding students in the subject on human rights, not to mention the organization of summer camps among other similar projects.”

Abu Awkal rejected UNRWA’s pretexts for limiting financial resources, which led to reduced financial aid to the poorest refugees. “The allowances of this program do not exceed, even by a small faction, the funds that the UNRWA has been spending on recreational activities, which will not benefit the poor families,” he said.

As of the beginning of April, UNRWA has stopped its financial aid program that targeted 10,000 impoverished families, due to a shortage in funds. The program, which provides $10 every three months to each individual in poor families, has been replaced with a job creation program. This has sparked a wave of protests in different parts of the Gaza Strip. Some protesters have gone as far as to break into the relief and distribution centers, preventing employees from entering the premises for several days, which prompted the UNRWA to close all aid centers in Gaza on Thursday, April 4, until security is restored.

In a news release, the director of UNRWA Operations in Gaza, Robert Turner, said that “the new program would provide families, with an average number of six members, with an opportunity to double their income over the two coming years, compared with the handouts they receive from the financial aid programs. Families would retain their dignity as they will be working to make a living, instead of being beneficiaries of financial aid programs.”

UNRWA, which was established pursuant to decision No. 302 of the General Assembly of the United Nations in 1949, provides relief and protection for some 5 million Palestinian refugees registered in Jordan, Lebanon, Syria and the occupied Palestinian territories (the West Bank and the Gaza Strip) until they find other means to support themselves. The organization also provides basic services of education, health, relief and social services.

Abu Awkal accused UNRWA of being pressured by Western countries to cut its handouts, saying that “the cuts in allowances and the creation of new programs are an attempt, under pressure from the Zionist entity, to terminate the Palestinian cause, which is the longest asylum case in the modern history.”

For his part, Adnan Abu Hasna, UNRWA’s media adviser in Gaza, said in an interview with Al-Monitor that there are some parties, whom he refused to name, that are inciting people to turn against UNRWA and its activities, stressing that reducing financial aid is the result of a shortage in funds and not related to other reasons. He also confirmed that the organization depends on voluntary funding.

Ever since Hamas took over the Gaza Strip in 2007, UNRWA has been receiving Western officials, who visit the besieged sector without meeting with Hamas officials or the government.

“UNRWA has no political agenda. Its programs are strictly humanitarian. During their visits to Gaza, the organization informs Western officials of the effect of the blockade on the suffering Palestinian refugees in Gaza,” said Abu Hasna.

He added that “should the authorities in Gaza wish to ban these visits, they would have done so. But these authorities are well aware of them and provide security for the visiting Western officials. What’s more, security guards are always deployed in the UNRWA headquarters, which does not serve Palestinian refugees in Gaza alone but in all areas where refugees seek asylum.”

He also stressed that UNRWA’s relation with Hamas is for coordination and technical — not political — purposes.

Hazem Balousha is a Palestinian journalist based in Gaza City, with a Master of International Relations from Turkey, as well as a BA in journalism. He has worked as a news producer for BBC World Service, as well as contributed to The Guardian (UK), Deutsche Welle (Germany), Al-Raya (Qatar) and many other publications. He has covered serious events such as the internal conflict between Fatah and Hamas in 2007, and the Israeli Operation Cast Lead war on Gaza 2008-09. Hazem is also the founder of the Palestinian Institute for Communication and Development (PICD). Twitter:@iHaZeMi