Palestinians Not Optimistic About Obama Visit

As US President Barack Obama prepares to meet Israeli and Palestinian leaders in their respective capitals, Palestinians do not expect any progress on the peace process, reports Hazem Balousha. 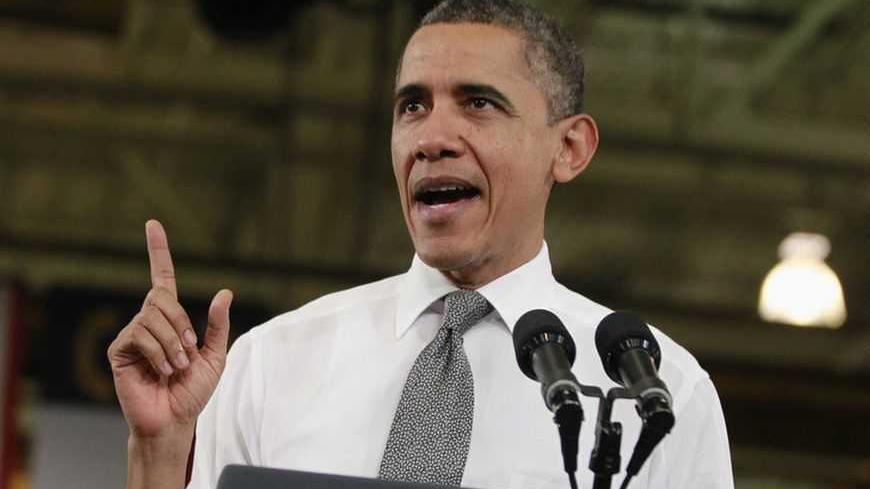 US President Barack Obama speaks on the economy after touring Linamar Corp., which manufactures parts for the truck industry in Arden, N.C., Feb. 13, 2013. - REUTERS/Jason Reed

US President Barack Obama will make a historic visit to Tel Aviv and Ramallah in March, the first since he took office in 2009. The visit comes amid a suspended peace process, a weak performance by Netanyahu's political party in the recent Israeli elections, and continued Palestinian division through Hamas’ control on the Gaza Strip and the Palestinian Authority (PA) in the West Bank.

Factions in the Gaza Strip exhibit traditional skepticism over the ability of the American administration to pressure Israel to achieve its vision of a two-state solution. They also criticize Washington’s failure to deter the Israeli government from continuing settlement activity, which is taking chunks out of territory on which a Palestinian state is supposed to be built and was the reason for stopping the negotiations between the Palestinian and Israeli sides.

Leading Hamas figure Mahmoud al-Zahar expressed pessimism over the possibility that Obama's visit will succeed in achieving rapprochement between PA President Mahmoud Abbas and Israeli Prime Minister Benjamin Netanyahu in order to resume negotiations. He said that Iran's nuclear file will likely be a priority for dialogue between the two parties, adding that the visit does not aim to pressure the Israeli government to move the peace process along.

He said, "I do not think that anything will be achieved regarding the Palestinian-Israeli issue, because Obama will try to prevent Israel from declaring  war on Iran due to the economic crisis and the inability of the US administration to wage new wars after its failure in the wars on Afghanistan and Iraq."

He renewed Hamas' position on negotiations as an option to ending the conflict with Israel, describing them as "fruitless and useless negotiations, which the Palestinian people have tried for years, but did not yield any results, except more settlements and the cultural appropriation of the occupied city of Jerusalem."

The PA, led by Abbas, hopes that Obama's upcoming visit to the region — which will take place after the formation of the new Israeli government — will redirect the course of negotiations with the Israeli side, through pressure from the new US administration to halt Israeli settlement activity until the implementation of a two-state solution by establishing an independent Palestinian state.

The Middle East conflict was not a priority on the agendas of either US presidential candidate. Obama won the American elections against his rival, Mitt Romney, mostly due to domestic policies.

The Palestinian factions, including the Islamic and leftist ones, share Hamas’ view regarding the efficacy of Obama’s visit to Israel and Palestine, and his utter failure to achieve any progress during his first presidential term. They felt this way especially after he gave his famous speech at Cairo University, in which he gave hope to Arabs that he might be different from other US presidents and bring real potential for change.

Leading Islamic Jihad Movement figure Khodr Habib says, "Obama’s slogans of change have remained ink on paper, and US bias and support for Israel has continued. We have not seen the change he advocated."

Habib says he expects Obama to pressure the Palestinian side to return to the negotiating table in favor of Israel, describing it as "a new round aiming to waste time and allow the enemy to impose itself on the ground with more settlements and the cultural appropriation of Jerusalem."

US Ambassador to Israel Dan Shapiro said in an interview with Israeli newspaper Yedioth Ahronoth that Obama spoke with Netanyahu following the Israeli elections, and agreed that there is an opportunity for them to meet during their second terms to discuss Iran’s nuclear file and deny it access to nuclear weapons, the collapse of the Syrian regime, and working to resume negotiations between the Palestinians and Israelis to achieve a two-state solution.

For his part, Kayed al-Ghoul, leader in the Popular Front for the Liberation of Palestine (PFLP), expressed pessimism about the visit, saying he expects it to focus on restoring the status of the US administration in countries witnessing the Arab Spring, as well as its relationship with Israel without considering Palestinian rights. He questioned Obama's ability to achieve any breakthrough in solving the Middle East conflict.

"We do not expect a narrative that differs from what we have previously heard from successive US administrations, which have only offered slogans to resolving the Palestinian-Israeli conflict, while real action on the ground came in the form of pressuring the Palestinian leadership to resume negotiations, whereas pressure should be put on Israel, which is violating international resolutions," he added.

"US policy is produced by institutions of the US administration, not the president, whose role is only limited to setting guidelines and determining directions," he said.

Ghoul accused Washington of seeking to protect Israel so it would not be sued in international forums for its "crimes," settlement activity, and violation of international conventions and treaties, despite the recognition of the majority of countries in the world of the right of the Palestinian people to self-determination and the establishment of a Palestinian state.

Hamas had given Abbas the green light to negotiate with Israel on the "prisoners document," and agreed on the establishment of a Palestinian state according to the 1967 borders.

Zahar said, "We told Abbas to go ahead with negotiations, although we do not believe in or pin any hope on them, and expect them to fail to accomplish anything on the ground."

As for the impact of the visit on the course of Palestinian reconciliation between Fatah and Hamas, for which negotiations are taking place in the Egyptian capital, Zahar said: "Abbas' decision is linked to the US and Israeli positions, and whether or not the United States and Israel approve of unity with Hamas."

Habib noted that the visit will have a negative impact on Palestinian reconciliation considering that the American and Israeli leaderships "do not want to see reconciliation."

Despite the pessimistic expectations about the historic visit of the president of the superpower of the region — due to the failure of previous US presidents, both Democrats and Republicans, to achieve any real breakthrough in ending the conflict — the Palestinians are hoping that the US administration will adopt a new, less biased stance toward Israel, especially in light of the current changes in the Middle East region following the Arab Spring revolutions.

Hazem Balousha is a Palestinian journalist based in Gaza City, with a Master of International Relations from Turkey, as well as a BA in journalism. He has worked as a news producer for BBC World Service, as well as contributed to The Guardian (UK), Deutsche Welle (Germany), Al-Raya (Qatar) and many other publications. He has covered serious events such as the internal conflict between Fatah and Hamas in 2007, and the Israeli Operation Cast Lead war on Gaza 2008-2009. Hazem is also the founder of the Palestinian Institute for Communication and Development (PICD). Twitter:@iHaZeMi