Obama Gets Mixed Reception On Visit to Ramallah

With no clear peace initiatives to push, US President Barack Obama has received a mixed reception on his visit to Israel and the West Bank from Palestinians, writes Hazem Balousha. 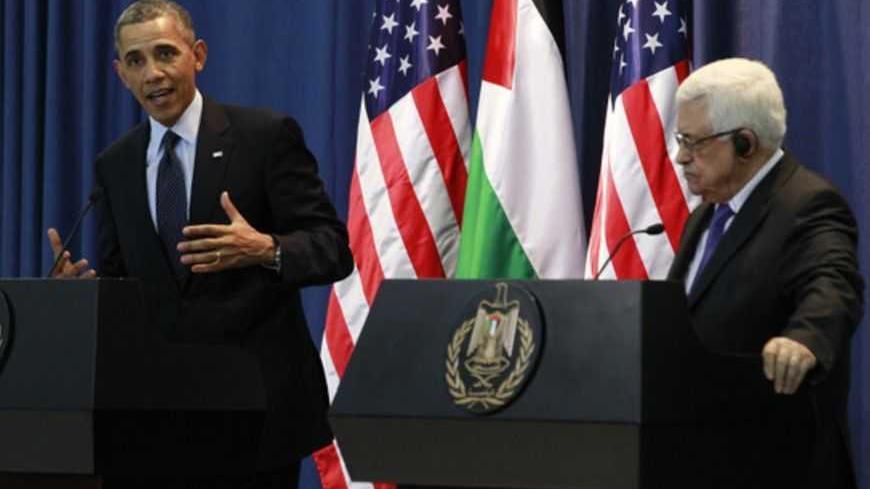 While the visit of US President Barack Obama to Palestine and Israel attracted a great deal of Palestinian media attention, ordinary Palestinian people have been occupied with meeting the needs of their everyday life. The Palestinian political factions, on the other hand, have not been pleased with the American president’s visit and the negative position of the American administration toward the Palestinian cause.

Hamas expressed pessimism about Obama’s visit. Obama visited Ramallah, the city of Hamas’ rival, President Mahmoud Abbas. In a brief statement, Ismail Haniyeh, Hamas’ prime minister, said, “We do not expect that Obama’s visit would lead to any breakthrough in the political equation on the ground. We do not believe that the American policy will help end the occupation. On the contrary, Washington seeks to consolidate and legalize settlements under the banner of peace.”

Haniyeh warned the Palestinian Authority against returning to the negotiating table with Israel under US pressure. “The PA should realize that its future depends on the degree of its commitment to national principles and achieving a deeply entrenched reconciliation,” he said.

In the defense of the Islamic Republic , which is the biggest supporter of Hamas financially and politically, Haniyeh said, “We also reject all efforts designed to make Iran be perceived as the enemy of Arabs instead of Israel, despite our differences regarding some issues.”

Obama was warmly received by the PA during his visit to the cities of Ramallah and Bethlehem, while his photo, along with the American flag, were burned during a march organized by Palestinian factions in Gaza City, in protest at the visit.

Salah Bardawil, spokesman for Hamas, said, “Obama’s speech in Ramallah was a humanitarian speech, in which he appeared as a failed political analyst trying to elude critical questions. He failed to commit to the pledges he has made and is seeking to force the PA to re-launch bilateral negotiations with Israel without any references.”

He added, “Obama has also condemned the resistance, while exonerating the Zionist aggression. The president claimed that he supported the Gaza Strip. He clearly demonstrated his support by sending US-made phosphorous bombs and F-16 warplanes, used to attack the children of Gaza.”

Bardawil stressed Hamas’ refusal of the political settlement, saying that the movement will continue to resist as it is the only way to liberate the land, achieve self-rule and get prisoners released.

The Islamic Jihadist movement in Gaza agreed with Hamas that Obama’s visit aims at pressuring the Palestinian people and the PA to bring forth a political settlement based on American requirements.

In this context, Khaled al-Batch, a leader in the jihadist movement said that “this visit is not to the Palestinian’s people’s advantage. It rather serves the interests of the ‘Jewish State’ and the Israeli military superiority over Palestinians.”

On another note, rockets were fired from the Gaza Strip on Thursday before the arrival of Obama to Ramallah, landing in the southern Israeli town of Sderot, causing damage to a house. During his press conference with Abbas, the US President condemned this attack.

He noted that Palestinians in Gaza are continually confronted with "misery and repression ... because Hamas refuses to renounce violence." He then added, "We saw the continuing threat from Gaza overnight, with the rockets that targeted Sderot."

Hamas implicitly denied responsibility. The group’s spokesman, Taher al Nunu said in a statement that “The resistance has nothing to do with the rockets, especially as they have been fired during this timing.”

On the other hand, Hizb ut-Tahrir organized marches in protest at Obama’s visit in different areas in Gaza, where protesters raised banners that read “Obama, the child murderer, is not welcomed," "America is the greatest evil. It must be the enemy,” and "Terrorist America sanctions the killing of Muslims under the pretext of terrorism.”

For his part, Mukhaimar Abu Saada, a political analyst, believes that the visit is positive in general and that Obama’s speech in Ramallah was negative and positive at the same time. He assured his listeners that Palestine is a sovereign independent state. Regarding the settlements, the president said that settlements do not enhance the chances of peace, reneging on what he had said to the American administration to this effect.

Saada explained that Palestinian factions hold Obama accountable for his record during the past four years and for not committing to the promises he made during his speech in Cairo in 2009. The expert said that these positions of the Palestinian factions are defensible, since the American president visits the region to listen only without setting forth any initiative to reach a solution to the Palestinian-Israeli dilemma.

The left-wing Popular Front took the same stance as Hamas towards Obama’s visit. “Obama’s speech is merely sweet talking, as was the case during his first mandate. There is a great discrepancy between his speech about a Palestinian state for the Palestinian people and the American efforts made to prevent the resolution of the UN Security Council to this effect,” said Kaed al-Ghoul, the Front’s spokesman.

The most significant outcome of Obama’s visit to Ramallah is that the US has resumed financing and political supporting. Negotiations, however, are not likely to be resumed any time soon, especially in light of the gap between the Palestinian and Israeli sides regarding settlements. This could pave the way to a new round of mutual accusations between Palestinian factions, mainly between Hamas, on the one hand, and the Palestinian president and Fatah on the other.

Hazem Balousha is a Palestinian journalist based in Gaza City, with a Master of International Relations from Turkey, as well as a BA in journalism. He has worked as a news producer for BBC World Service, as well as contributed to The Guardian (UK), Deutsche Welle (Germany), Al-Raya (Qatar) and many other publications.