Hizb ut-Tahrir in the Palestinian territories emerged as a political party that seeks the return of the Islamic caliphate, unlike Hamas and other Islamic parties that focus on the resistance against Israel. 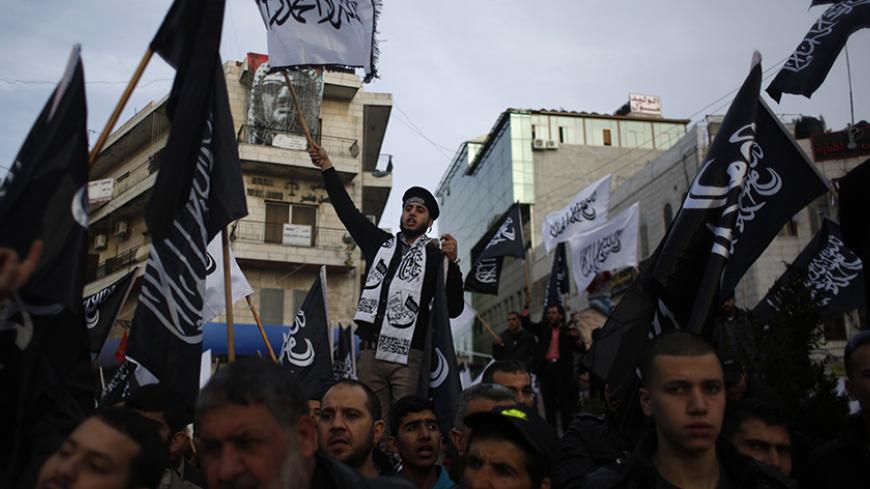 Palestinian supporters of Hizb ut-Tahrir take part in a protest against satirical French weekly newspaper Charlie Hebdo, which featured a cartoon of the Prophet Muhammad on the cover of its first edition since an attack by Islamist gunmen, in the West Bank city of Ramallah, Jan. 24, 2015. - REUTERS/Mohamad Torokman

Palestinian worshipers who support Hizb ut-Tahrir protested the visit on May 22 of Chief Justice of Jordan and cleric Ahmed Halil’s visit to Al-Aqsa Mosque, after Halil’s bodyguards beat an elderly man who opposed the visit. This angered the worshipers and fueled the protests inside the mosque.

Palestinian worshipers in Al-Aqsa Mosque tried to stop Halil from delivering the Friday sermon by chanting slogans against him as soon as he approached the pulpit. Hilal was then forced to back away, and another preacher replaced him.

Maher al-Jabari, a member of Hizb ut-Tahrir’s media office, denied that activists were responsible for obstructing Halil’s visit and sermon. He considered what happened as an expression of the popular opposition to the normalization of visits to Jerusalem under the protection of the Israeli occupation.

Hizb ut-Tahrir was founded in the Palestinian territories in 1953 by Judge Taqiuddin al-Nabhani. However, the party’s support for and analysis of the Palestinian cause were not based on national concerns, but were linked to other issues in the Islamic world, such as the European occupation of Arab countries following World War I and the Muslims’ suffering in Asian countries, such as China and India, following the fall of the Ottoman Empire in 1924. The party views the Ottoman Empire as the last caliphate state, which is the core problem of Muslims around the world.

In regard to the conflict with Israel, Hizb ut-Tahrir has limited its action to the analysis of the political situation and raising awareness among Palestinians, without taking part in armed operations against the Israeli occupation. This has prevented it from being subject to any prosecution by Israel.

Israel has no specific stance on Hizb ut-Tahrir. However, the fact that none of the party’s members have been arrested or tracked down by the Israeli army is implicit evidence that Israel is not bothered by the party’s ideology, as long as it does not lead to a military armed action against it.

Nevertheless, Hizb ut-Tahrir still does not recognize the legitimacy of Israel and continues to be against any negotiations with it. It also refuses to refer to international bodies, such as the United Nations and the Security Council, which are considered a contradiction to the Sharia principles.

Hizb ut-Tahrir has intensified its public activities in the Palestinian territories in recent years, be they public seminars, hanging banners or publishing statements. They mostly focus on the suffering of Muslims around the world and the need to restore the Islamic caliphate, as a key introduction to resolve the Palestinian cause.

The Palestinian Authority (PA) has taken clear hostile stances against most of Hizb ut-Tahrir's activities. Most recently, on May 23, security services set up checkpoints at the entrances and exits of cities in the West Bank, to prevent the Caliphate Conference from being held in Ramallah.

On May 30, the PA’s security services arrested 10 members of Hizb ut-Tahrir in the West Bank and used violence when dealing with them. Hizb ut-Tahrir said that the PA actions toward it are repressive and represent acts of thuggery.

Adnan al-Damiri, the PA security services spokesman, said on May 24 that the PA met Hizb ut-Tahrir’s requests to hold activities on several occasions. But he added that what Hizb ut-Tahrir has done in Al-Aqsa Mosque on May 22 is shameful and indicates that it is a violent camp, and that their actions would harm the Palestinian-Jordanian ties.

Speaking to Al-Monitor on condition of anonymity, a Palestinian security official said, “Hizb ut-Tahrir is part of political Islam in the region, and its ideology is based on the idea of a global ummah [Islamic nation] more than on Palestinian nationalist principles. This is why it uses the Palestinian internal arena to express its positions on issues unrelated to the Palestinians, which sometimes harm ties with friendly states.”

He added, “While it’s true that unlike Hamas, Hizb ut-Tahrir does not have a military structure that poses a threat to the PA, its ideological principles are more extreme than those of Hamas. While the PA — at some point — could reach certain political understandings with Hamas, such understandings are unlikely, if not impossible, with Hizb ut-Tahrir."

The PA’s position on Hizb ut-Tahrir seemed more in line with those of Arab countries that ban it, such as Jordan, Syria, Egypt and others.

There is also a contradiction in principles between Hizb ut-Tahrir and the PA. Hizb ut-Tahrir considers the latter void, because it was created by the Oslo Accord, and has called for boycotting the municipal, legislative and presidential elections. Furthermore, the educational curricula ratified by the PA was met with severe condemnation from Hizb ut-Tahrir. The latter waged a massive campaign against the curricula, and launched classes at mosques and sent delegations to schools to illustrate to the Palestinian public how the PA curricula contradicts Sharia.

In the Gaza Strip, where Hamas is in control, Hizb ut-Tahrir seems more at ease than in the West Bank and carries out its activities with greater freedom. Its most recent event was a public seminar held in Gaza City on May 4. It then organized a march in central Gaza City on May 17 to mark the 94th anniversary of the fall of the Ottoman Empire.

Hassan al-Madhoun, the spokesman for Hizb ut-Tahrir in the Gaza Strip, told Al-Monitor, “The fall of the Ottoman Empire is the reason behind the loss faced by Palestine and the other Arab countries. The establishment of a new caliphate state alone will fill the political vacuum faced by the Islamic nation and liberate Palestine.”

Madhoun added, “Muslim armies are called to direct their weapons against Israel rather than against [other] Muslims in Arab countries. Hizb ut-Tahrir rejects all calls to negotiate with the Jews.”

Hizb ut-Tahrir’s position on Hamas is influenced by the ideological dispute between the two. While Hamas calls for the establishment of a Palestinian state, Hizb ut-Tahrir maintains its call for founding a caliphate state on Islamic lands. In addition, Hamas calls for using armed action to achieve its nationalist goals, while Hizb ut-Tahrir focuses on peaceful methods to establish a caliphate state. With regard to the political division on the Palestinian scene, Hizb ut-Tahrir has warned Hamas against a rapprochement with Fatah, fearing that it would slide into the square of the peace process.

Although the number of its members in Palestinian territories is unknown, Hizb ut-Tahrir is considered a pivotal element of the axis of Islamic movements, along with Hamas, Islamic Jihad and the Salafists.

While Hizb ut-Tahrir continues to complain that it is being targeted by the PA, it is more likely to come to an understanding with Hamas. Hamas and Hizb ut-Tahrir agreed to search for common ground and turn a blind eye to the ideological differences that could set them apart. This is because both Hamas and Hizb ut-Tahrir do not wish to clash and want to keep the Gaza Strip an open arena where all Palestinian movements can coexist.