Hizb ut-Tahrir: Palestine is not our main cause

The spokesman for the Islamic Hizb ut-Tahrir insists that his party has nothing to do with the Islamic State, as the latter seeks to establish an Islamic caliphate by using violence, while Hizb ut-Tahrir seeks the same goal but through political means. 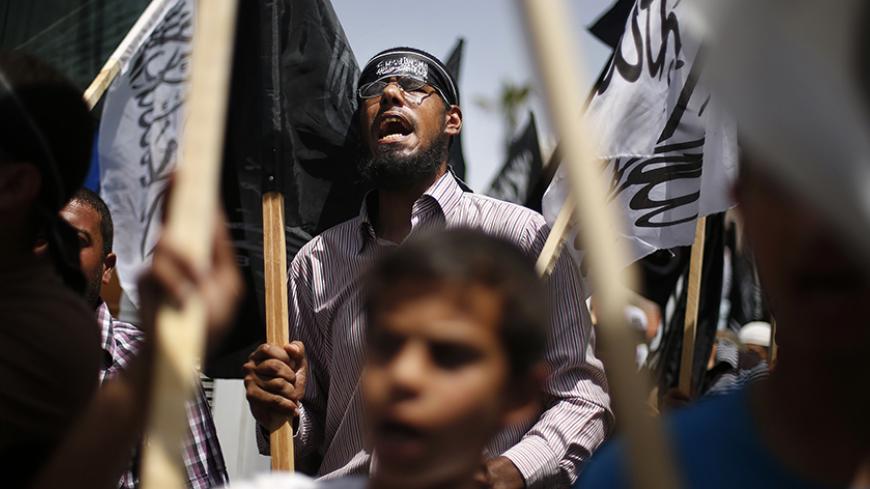 Many of the ideological concepts and doctrines of Hizb ut-Tahrir (Party of Liberation) and the Islamic State (IS) are similar. They both believe in the goal of establishing Islamic caliphate rule and in the strict interpretation of Islamic law. The two groups differ, however, in one major respect: Hizb ut-Tahrir stands categorically against the use of violence and military means to realize its ideals.

“We are against any use of material means to accomplish our goals,” Musab Abu Arqoub, a Palestinian Hizb ut-Tahrir leader, told Al-Monitor by phone from the town of Dura, in the Hebron district.

Abu Arqoub, a member of Hizb ut-Tahrir’s media office, said that the 63-year-old Islamist party, founded by Palestinian judge Taqudin al-Nabahani in 1953, does not consider the liberation of Palestine its central cause. “Our central, existential cause is the re-establishment of the caliphate, and after that we would work for the liberation of Palestine as well as ridding the Muslim world of the pro-Western regimes that are ruling them.”

With Hizb ut-Tahrir opposed to using violent means to accomplish its goals, the Israelis have over the years largely left the movement alone. The same is true of the Palestinian government, which allowed the group to organize rallies in major West Bank cities this year to commemorate the 93rd anniversary of the fall of the caliphate in Istanbul, in 1923. After the death of Prophet Muhammad, various men have been declared caliph, giving them near absolute power in overseeing the Islamic nation. With the demise of the Ottoman Empire following World War I, the era of successive caliphs came to a close.

A doctor and an ideologue, Abu Arqoub said that Hizb ut-Tahrir has been consistent in its ideas and methodology since its establishment. “We have not changed,” Abu Arqoub said. “We try to persuade people about our ideas, which are focused on the need to bring back rule by the caliph. Our methodology is simply to convince people of our ideas.”

Abu Arqoub belittled recent Israeli threats to declare Hizb ut-Tahrir an illegal organization. “We are part of an international movement, and anyway, we do not recognize them,” he said. The spokesman did not say the word “Israel,” insisting on referring to it as the “Jewish entity.” He blamed the latest Israeli effort to declare Hizb ut-Tahrir an illegal organization on a “campaign led by the United States and Russia to brand the party a terrorist organization.”

Israeli Security Minister Gilad Erdan attempted on Aug. 8 to justify moving against Hizb ut-Tahrir by claiming that its members carried out violent acts against Israel, but did not provide any details. Abu Arqoub rejected the accusations. Erdan also justified taking action against the party by attempting to put it in the same category as the violent IS.

“It makes no sense to allow a group whose ideology is similar to that of IS to operate in Israel,” Erdan told the Israeli Channel 10. “I intend to do everything in my power to outlaw this organization.” Hizb ut-Tahrir has regularly and consistently rejected IS in public statements, speeches and rallies, asserting that the conditions for caliphate rule have not been established. They also vehemently rejected IS’ methodology, saying it is contrary to Islam.

Government and political sources who follow Hizb ut-Tahrir in Jerusalem and Jordan, where it is outlawed, told Al-Monitor on condition of anonymity that they believe its activists were responsible for the protest that stopped Jordanian judge Ahmad Hleil from delivering a Friday sermon at Al-Aqsa Mosque in May 2015. The official had been invited to speak at the mosque, but was forced to abandon his speaking role because of protests by worshippers.

The sources also think the party’s supporters are responsible for thwarting Jordanian efforts to install cameras on Haram al-Sharif. Abu Arqoub strongly denied the allegations against his movement’s supporters.

“What happened at Al-Aqsa to the Jordanian official is a normal act by Muslims, but it was not an act by Hizb ut-Tahrir,” he insisted. “Our efforts are restricted to political and ideological issues, not the use of any material [means] to enforce our idea.”

That Israel and the Palestinian government have tolerated the movement for years is perhaps the best proof that Hizb ut-Tahrir is not a terrorist organization and does not call on its members to carry out violent acts. In fact, Hizb ut-Tahrir is often criticized for not doing anything except talk against Israel.

The Israeli military has not considered the movement to be harmful for 50 years, so it is difficult to believe that the party has suddenly become dangerous while its leaders continue to insist that the group continues to act only in a civil manner. Declaring Hizb ut-Tahrir an illegal terrorist organization at this time will certainly not bring an end to the movement, but it might make it more popular than it is today.