The Islamist group Hizb ut-Tahrir is hosting a series of conferences in Ankara and Istanbul calling for a caliphate to be reinstated and demanding the closure of the US and British embassies to end terror in Turkey. 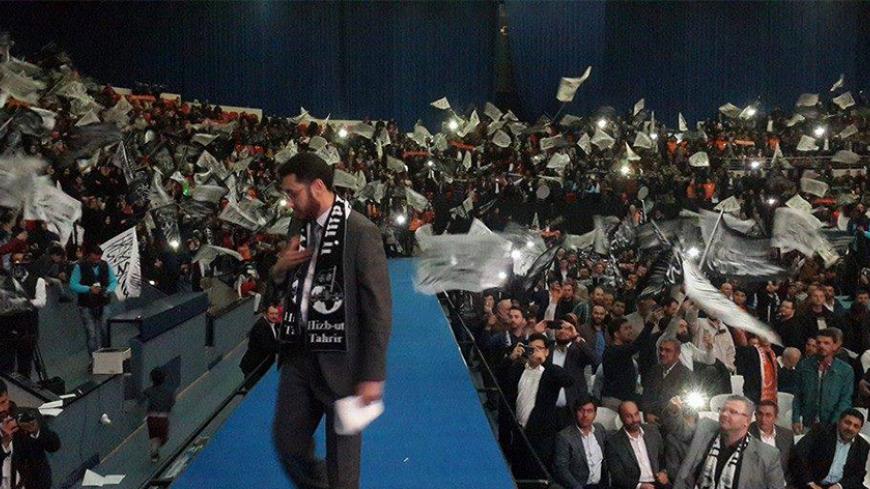 Ismail Kahraman, the speaker of the Turkish parliament, caused an uproar April 25 by suggesting that the principle of secularism be stricken from the new constitution. Secularism has been a thorny subject in Turkey since March 3, 1924, when the Ottoman caliphate was abolished. As scholars observe a rising trend of Islamophobia, there is simultaneously growing interest in the idea of a caliphate in Turkey.

The international Islamist group Hizb ut-Tahrir, established decades prior to the Islamic State (IS) in 1953, emerged with the ultimate goal of resuscitating the caliphate. With a small yet growing group of dedicated followers, Hizb ut-Tahrir’s Wilayat Turkiye has been quite active in organizing rallies, conferences and seminars for the past year.

In April, the group ran a weeklong social media campaign called “Oust colonialists, end terror.” On April 22, it held a conference on “The Issue of Terror, Real Culprits and Lasting Solution” at which five speakers discussed why Muslim-majority countries are facing an increasing number of conflicts, why terror attacks have skyrocketed in Turkey, who the real culprits are behind them as well as what Muslims can and should do about these problems. The answers were clear and straightforward. Hizb ut-Tahrir members said that colonial powers in Turkey were those supporting and generating terror. Therefore, to end terror attacks, they proposed that the US and British embassies be permanently closed and all their personnel expelled. Hizb ut-Tahrir sent letters to the embassies directly asking them to leave Turkey.

Hizb ut-Tahrir is not shy about criticizing the ruling Justice and Development Party (AKP). Although Hizb ut-Tahrir appreciates the leadership role President Recep Tayyip Erdogan plays in defense of the rights of Muslims, the group finds it insufficient and ineffective. In Hizb ut-Tahrir's video presentation about Western countries supporting terror in Turkey, the photos in the background were poignant: First Erdogan’s picture would appear with words asking the West, “Are you with us or with the PYD?” in reference to the Democratic Union Party, a Syrian Kurdish group. Then Turkish Foreign Minister Mevlut Cavusoglu’s photo would appear with his statement, “Just because we think differently on the PYD, we cannot quarrel with the United States.”

Hizb ut-Tahrir’s activities have generated not only an increasing number of supporters but also angry critics. On March 10, civil society organizations in support of secular values lodged an official complaint with the public prosecutor against Hizb ut-Tahrir’s seminars. On social media, several comments appeared asking how a terror organization can hold conferences in the center of Ankara. Some seasoned pundits have stated that Hizb ut-Tahrir’s conferences in Turkey are an indication of Turkish support for jihadis and IS. But is this really the case?

Mahmut Kar, the media bureau chief for Hizb ut-Tahrir Turkey, told Al-Monitor, “One must question why a group that is proposing concrete and strong solutions to the terror problem of the country, a group whose members do not even carry a Swiss army knife, is charged with terrorism.”

Hizb ut-Tahrir holds seminars and conferences to reach out to other groups. The party is open to discussion and always eager to take questions from the domestic or foreign press. It is quite telling to see that deep rifts within Turkish society prevent secular analysts from approaching Hizb ut-Tahrir and speaking with it directly. Also of note, Hizb ut-Tahrir members almost always appear in designer suits, sometimes wearing ties, with well-groomed beards. Though women occupy a separate section in their audiences, Hizb ut-Tahrir does not require the full face veil. Women form an active part of the organization.

Kar was straightforward. “Hizb ut-Tahrir condemns any attacks on civilians anywhere; it is not acceptable to Islam. We submitted letters to the US and British embassies in Ankara because we believe these two are the countries that support terrorism and themselves devour terrorism. We also acknowledge that from time to time, the Turkish state itself feeds upon terrorism for domestic policy goals. We observe that the Turkish leaders have been followers of the UK and currently the US governments. Cutting diplomatic, economic and political links with these countries may be against realpolitik. But then we must remember that realpolitik means to accept the conditions that you have. Then we go in vicious cycles. If you act according to realpolitik, how do you end terror?”

For Hizb ut-Tahrir, which is critical of nationalism and colonialism, the answer is the reinstatement of the caliphate. The group is critical of the brutal methods of IS as attempts to tarnish the concept of the caliphate and view the group as a US project. It has repeatedly condemned IS attacks. Kar told Al-Monitor that in contemporary Turkey, the caliphate is widely discussed for two reasons: IS brutality and the fact that Muslim populations lack a leader. The argument, for many, is over whether Erdogan’s executive presidency is enough or a caliphate is needed for Islamic unity. Hence in early March, Hizb ut-Tahrir’s seminars in Istanbul and Ankara did not question the reasons for a caliphate, but discussed the kind of caliphate that would be best for believers.

Kar said, “In March, we gathered more than 5,000 participants who attended the seminar with a yearning for the caliphate. This burning desire for Muslims to live under the rule of the caliphate was always there, but from time to time it was suppressed by foreign demands such as democracy. Today Muslims in the region, including Turkey, see that promises of democracy have failed them and it is not the way for them. Hizb ut-Tahrir never lied to the Muslims about these truths.” Kar also observed, “In Turkey, politics fails to provide solutions to the problems.” Indeed, this view is common to different religious groups and civil society organizations in Turkey.

So while anti-AKP groups are fighting each other over whether the AKP can be trusted with sustaining a secular system in the new constitution, multiple Islamist groups are flourishing all over Turkey. To brand all groups with black flags and Arabic script as terrorist and to criticize each Islamist group without bothering to understand their individual demands may not be the most effective method to sustain a secular system in Turkey.