Hamas has allowed some Salafist organizations to openly carry out their activities while trying to shut down others. 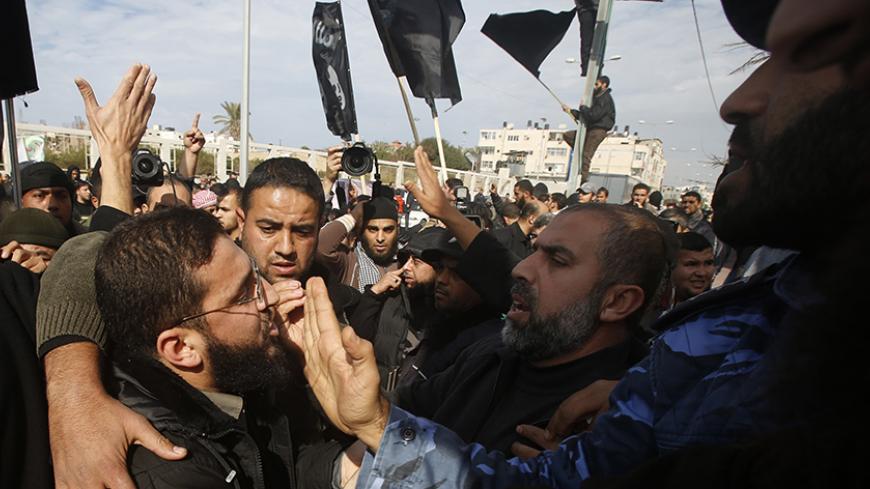 GAZA CITY, Gaza Strip — Tensions are ongoing between the Hamas movement and the Salafist Ansar al-Dawla movement, which in February publicly declared its support for the Islamic State (IS), to which Hamas is opposed and which in turn does not look favorably upon Hamas. Meanwhile, on May 17, Hamas allowed another Islamic group, Hizb ut-Tahrir (Party of Liberation), to stage an event in the center of Gaza commemorating the 94th anniversary of the fall of the Islamic caliphate, last led by the Ottomans. Hamas appears to be opposed to Islamic groups that support IS and its self-proclaimed caliphate, but does not have a problem with other Islamic groups acknowleging the abolished caliphate and hoping for its re-establishment.

The Hizb ut-Tahrir gathering was allowed to take place a few weeks after Hamas began a crackdown against Salafist groups in the name of preserving stability after a dispute between Hamas and Ansar al-Dawla. The security measures, which began in April, also followed in the wake of a series of anonymous bombings, including ones next to the Abu Mazen roundabout and internal security headquarters, outside the offices of the United Nations Relief and Works Agency for Palestine Refugees in the Near East and at the prosecutor general’s headquarters. Results from investigations into these incidents have not been made public.

The security campaign included arrests by the Interior Ministry's security apparatus and the May 1 demolition of the Masjid al-Mutahabin, the mosque where Ansar al-Dawla held meetings. On May 3, the group issued a statement demanding the release of its members.

Hamas' differing reactions to the Salafist groups raise the issue of why the movement, which ran in democratic elections to gain access to power, allows Salafist or Islamic parties that oppose democracy to hold public gatherings, conduct seminars and disseminate their ideas while denying other Salafist parties intellectual freedom.

Hizb ut-Tahrir is an Islamic political organization. According to the party’s website, it was founded in 1953, has branches in a number of Arab and Islamic countries and calls for the re-establishment of the Islamic caliphate. The website states that the group does not support al-Qaeda or IS, but it also says that it objects to the democratic process for Arab and Islamic countries, because it has been implemented under Western domination.

“Destroying the Islamic caliphate led to the loss [under one flag] of Palestinian land and the rest of the Arabs," Hassan al-Madhoun, spokesman for Hizb ut-Tahrir in the Gaza Strip, told Al-Monitor. “Only the Islamic caliphate will fill the political vacuum experienced by the Arab and Islamic nations. It will liberate Palestine and unify the Arab and Muslim nations in light of the sectarian rivalry witnessed in the Arab region. The state of the caliphate is a state with real state authority and underlying jurisprudential, intellectual and legal structures.” Hizb ut-Tahrir’s opposition to Operation Decisive Storm, the military campaign waged in March and April against the Houthis in Yemen, illustrates its call for unity.

“We call on the Muslim armies to direct their weapons toward Israel instead of Muslims in an Arab country,” Madhoun said.

Madhoun added, “The West knows that the return of the caliphate is inevitable, therefore it supports regimes that suppress the nation’s movement, represented by the revolutions in Muslim countries, such as in Egypt, Iraq, Syria, Yemen and others. The nation is alive, and there are Western fears of a return to the rule of the Islamic regime as a result of the Arab revolutions. The caliphate ruled Muslims for 1,300 years. Calling for its return is a tenet and is an idea that does not fall outside the framework of Islamic societies.”

In regard to any commonalities between Hizb ut-Tahrir and IS, Madhoun said, “There are similarities among Islamic parties. All of them believe in the state of the caliphate, but we have repeatedly advised IS to stop messing in politics and [are against its] declaring the alleged caliphate, since this distorts the true image of the state of the caliphate.” Hizb ut-Tahrir does not consider anyone an apostate simply because he or she disagrees with its ideas, and it considers itself a political, not a Salafist, party.

WIth the establishment of other Islamist parties, Hamas now finds itself in a difficult ideological position. According to a Salafist leader who requested anonymity, “Hamas cautiously and prudently discusses religious issues concerning women's participation, religiously uncommitted men and other issues, because it turned into a democratic Islamic political party. This also affected its international positions, such as its stance on Syria and Operation Decisive Storm.” Hamas, however, remains an Islamist movement, but with an ideology different from IS and other Salafist and jihadist groups.

A number of Hamas leaders refused to comment to Al-Monitor about the differences in how it deals with the various Islamic ideologies and the political and Salafist movements. Hassan Abu Haniyeh, a Jordanian expert on Islamist groups told Al-Monitor by phone, “Hamas’ history in dealing with political Islamic factions was based on the rule of choice — between resorting to military force or not.”

He added, “Hamas has confronted Salafist and jihadist groups on the military and ideological levels since it ran in the elections in 2006 and after it took control of the Gaza Strip in 2007.”

Abu Haniyeh further stated, “There is a big difference between Hizb ut-Tahrir and the jihadist parties. [Hizb ut-Tahrir] does not believe in democracy, pluralism and other related principles. But it is not pursuing a violent approach like Hamas and does not use military action as an approach to bring about change. Hizb ut-Tahrir aims to disseminate the [religious] call and is therefore based in peaceful means.”

In short, Hizb ut-Tahrir’s approach is contrary to the jihadist Salafist ideology, according to Abu Haniyeh. He said, “The jihadist Salafist parties that emerged in Gaza — such as Jaysh al-Islam, Shura al-Mujahedeen, Ansar Allah, Ansar Bayt al-Maqdis and Abu Noor al-Maqdisi — do not believe in a truce with Israel. Rather, these groups think that the relationship with Israel should be based on ongoing confrontation. This is counter to Hamas’ approach, which balances inclinations. It is a national resistance movement and has a political agenda that fits that reality.”

Hamas denies that any groups in Gaza have pledged allegiance to IS, but as Abu Haniyeh noted, “The pledge of allegiance by some Gazan Salafist groups to IS was made clear through social networks, including Ansar Bayt al-Maqdis, which has Palestinian and Egyptian members.” He added, “Most of the jihadist Salafist groups have split from Hamas’ military wing, the Izz ad-Din al-Qassam Brigades, due to Palestinian political factors, Egyptian internal matters and the geographical juxtaposition of Egypt and the Gaza Strip.”

Abu Haniyeh thinks the jihadist Salafist ideology made inroads into Palestine in the latter part of the early 1990s and experienced a boost in 2000 and with the advent of IS. These groups are still in their infancy in terms of their ideologies and activities.