The lack of progress in the Palestinian-Israeli conflict is creating opportunities for extremist groups to re-emerge, such as Hizb ut-Tahrir, which calls for the return of the Islamic caliphate. 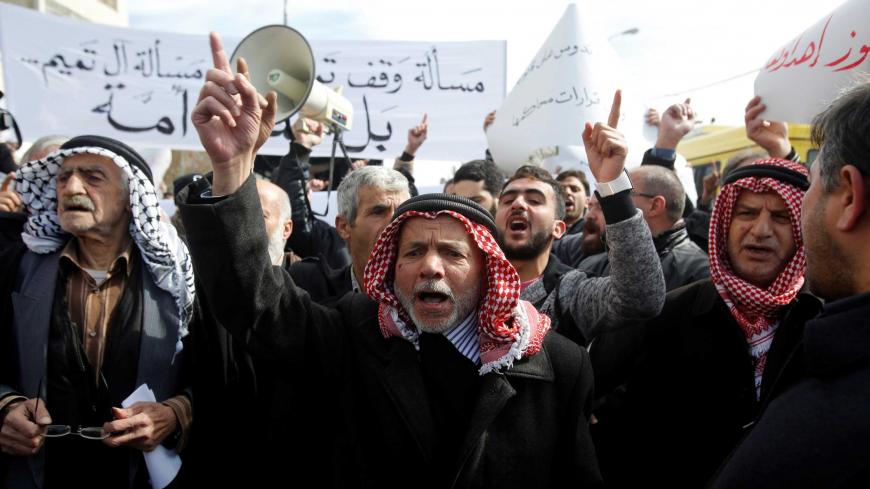 Palestinian protesters take part in a demonstration organized by Hizb ut-Tahrir against what they say is a decision by Palestinian Authority granting Islamic land to a Russian church in the West Bank city of Hebron, Feb. 4, 2017. - REUTERS/Mussa Qawasma

The failure of the major Palestinian movements to produce any concrete results in ending the occupation has given an international Islamic movement a chance to shine. Hizb ut-Tahrir (Party of Liberation) is a unique organization that seeks the establishment of an Islamic state. They hope to recreate the caliphate system that initially ruled Islam after the death of the Prophet Muhammad. The party does not partake in or support violent or military resistance activities.

In Palestine, Hizb ut-Tahrir has recently focused on local social issues and not taken part in active resistance to the Israeli occupation. A spokesman of Hizb ut-Tahrir told Al-Monitor back in 2016 that Palestine is not their main cause.

Hizb ut-Tahrir was established in Jerusalem in 1953, but is now active in the occupied territories and throughout the world. It has a limited but dedicated following.

Suheir Ismael Farraj, the director of TAM, a nongovernmental organization that trains women in media skills, later told Al-Monitor that the aim of their protest was not to stifle free speech but to stop incitement. “Such events incite violence against women and we can't stand idly by and allow it to happen.”

Farraj noted that at the time when “the world is celebrating the UN’s 16 Days of Activism Against Gender-Based Violence Campaign, it makes little sense for defamation of women to be allowed in a public setting.”

The protest action produced the intended results and the Palestinian government ordered the event be canceled.

Mohammad Ghazali, an activist with Hizb ut-Tahrir in Jerusalem, told Al-Monitor that the topic of the seminar was purely religious and not political. “We are not against women's organizations but we are from a religious perspective opposed to the mixing of men and women and call for separation in all public events.”

Hizb ut-Tahrir holds annual conferences in Palestine that thousands attend. The last conference was held in Ramallah on April 27, 2017, the 96th anniversary of the end of the Islamic Caliphate's rule.

Said al-Ghazali, a political analyst and former reporter with the Associated Press in Jerusalem, told Al-Monitor that supporters of Hizb ut-Tahrir live in a strange bubble. “They still talk about British and American conspiracies and are unable to deal with many of the current challenges facing Palestinians.”

Ghazali said that Hizb ut-Tahrir supporters are not involved in any acts of resistance against Israel and are “opposed to Hamas and Fatah.”

He added that in the past, they had taken provocative actions such as throwing shoes at public officials in Al-Aqsa mosque, but have settled down now to focus on communication via seminars and discussions. “They attacked Egyptian and Jordanian officials when they visited Al-Aqsa in recent years, but they are now content to spend their energy on raising awareness of their ideology.”

Ghazali explained that unlike the Muslim Brotherhood, which works hard to build grass-roots support, Hizb ut-Tahrir takes a top-down approach. “Hamas and others like them work their way up by concentrating on the family, community and the state, but Tahriris hope that one day, their supporters will conduct a coup and take over power at the top.”

Ghazali noted that the group is also “opposed to Khomeinism and Baghdadi-style Islamic State activities,” believing that the time is not ripe yet for an Islamic state.

Musab Abu Arqoub, a charismatic party leader from the Hebron area and a member of Hizb ut-Tahrir's media bureau, has focused in recent days on opposing the newly established Palestinian social security program, calling it theft of private wealth. On Nov. 1, the Palestinian government introduced a social security program that requires workers to contribute 7% of their salaries toward that fund.

Abu Arqoub often speaks in mosques and his anti-social security speeches receive wide support on social media. A Nov. 24 lecture in a Hebron mosque in which he trashed the social security program received 1,400 views on Facebook.

The Palestinian struggle has gone through various phases without resolution. Different ideologies have been searching for a successful formula to the end of the Israeli occupation without any progress. This lack of a successful liberation strategy plays into the hands of radical groups that find in people's misery an opportunity to win over supporters. Hizb ut-Tahrir in Palestine avoids direct attempts to end the Israeli occupation, but its influence on the public pushes society, and especially women, back decades, forcing many genuine supporters of freedom of expression to make an exception in their opposition to them.