Next in line on Erdogan's warpath: Naughty Islamists

Turkish President Recep Tayyip Erdogan is cracking down on Islamists — even peaceful ones — who fail to applaud him. 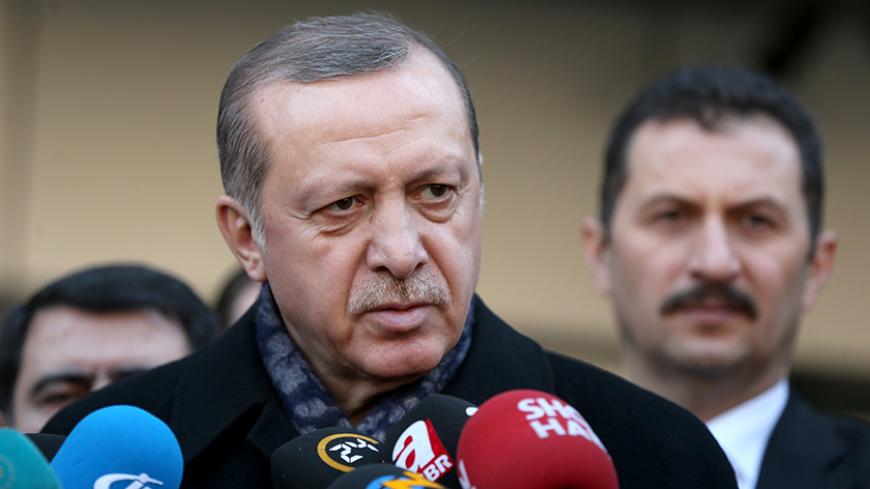 Every year in early March, the Islamist group Hizb ut-Tahrir's branch in Turkey holds an international conference to commemorate the Ottoman caliphate, which was abolished in 1924.

This year’s conference, set for March 5 in Istanbul, was to be titled “Why Does the World Need the Caliphate?” Mahmut Kar, media bureau chief of Hizb ut-Tahrir Turkey, had applied for permission from local authorities to hold the conference under the standard procedure. Yet on March 1, news broke that Kar and one of his colleagues, Osman Yildiz, were taken into custody.

“After the announcement for the conference was made, extremely secular Kemalist media outlets started spreading news against the event and pressuring the government," Kurtulus Sevinc, a member of Hizb ut-Tahrir’s media bureau, told Al-Monitor. "Authorities soon informed us that our conference was banned. Kar was invited to the police headquarters to receive this official decision, yet, to all of our surprise, on the orders of a prosecutor, Kar and Yildiz were detained on March 1.”

On March 6, 300 Hizb ut-Tahrir supporters, including Kar's family members, stood in quiet protest in front of the police headquarters in Istanbul demanding the release of Kar and Yildiz, saying that if the men remained in custody, the police could detain the supporters as well. To everyone’s surprise, police did take all the protesters, including women and young children, into custody. The next day, the women and children were released, and later, all but three of the 300 male supporters were let go. Now, a total of five members are in custody. Sevinc said Yildiz was allowed to meet with his wife briefly and told her they feared they would be held in custody for another 15 days.

Fatih Kar said that when he tried to deliver fresh clothes to his brother and Yildiz on the first day of their detention, he had a difficult time locating them.

The ruling Justice and Development Party (AKP) rose to power on the shoulders of Islamist groups and pious Turks and Kurds. Indeed, the secular media for decades reported how AKP members trod carefully so as not to upset certain Islamists and to meet most of their demands. Now, the pattern has changed. As fellow Al-Monitor columnist Mustafa Akyol succinctly explained earlier this year, Islamists have fallen out of favor with Erdogan. We are likely to see further evidence of the end of this love affair.

If glorifying and discussing the caliphate is sanctioned by state institutions, why is Hizb ut-Tahrir silenced? Fatih Kar also emphasized the irony that AKP senior members are angry because some German cities recently canceled AKP rallies, but that the AKP applies the same mentality to Hizb ut-Tahrir inside Turkey.

Indeed, in March 2016 in Ankara, Hizb ut-Tahrir held a big conference with significant speakers from Indonesia, Crimea, Ukraine and Australia, to name a few. Hizb ut-Tahrir is not a secret or illegal organization in Turkey, according to open-source publications. Its rallies can be seen on YouTube dating back to 2013 in Ankara or 2015 in Istanbul, always calling for the caliphate to be reinstated. As Al-Monitor reported previously, Hizb ut-Tahrir’s Turkey branch, although small in number, has been quite active in the last decade. This has been largely due to the AKP’s past willingness to open up public space to a variety of Islamic groups and different religious orders. Hizb ut-Tahrir has been a nonviolent Islamist group that has been courageous to criticize the government on a variety of issues, from its flip-flopping on Israeli policies to the upcoming referendum that could grant the president unprecedented power.

Sevinc detailed Turkish Islamists' reactions to these events. Initially, when only two men were taken into custody, everyone expected them to be released quickly. However, Sevinc said, “the detentions of 300 peaceful protesters, including women and children, sent shock waves to all Muslims in Turkey. Just think about it: There are people openly supporting terrorism against Turkey who are serving as lawmakers in the Turkish parliament, yet peaceful Hizb ut-Tahrir sympathizers who are only involved in theoretical and political studies are taken into custody.”

Sevinc said the group has received support messages from almost all segments of society, including AKP members. The public condemned the treatment and detention of Hizb ut-Tahrir members. He said, “In this difficult time, we are relieved and grateful for the solidarity shown from different NGOs  [nongovernmental organizations], columnists as well as Muslim brothers.” Sevinc also repeated that Hizb ut-Tahrir never endorses violence, but refuses to be silenced in the face of injustice.

Al-Monitor asked a few AKP officials and pro-AKP groups why Kar and Yildiz have been detained since March 1. They said the group's timing was bad: With the country under state-of-emergency law, Hizb ut-Tahrir should have known better than to call for a conference about the caliphate. Another official said the caliphate is "forbidden in Turkey.” If that's the case, why wasn't Hizb ut-Tahrir warned or legally held accountable years ago?

One scholar, who asked to remain anonymous, told Al-Monitor: “The government still treats Islamists with velvet gloves compared with Alevis, Shiites, Kurds or leftists. So yes, two or three of them were detained, probably because the government feared there would be unrest, given all the media uproar at the end of February. But still, their media outlets aren't shut down; their homes haven't been raided. They really shouldn't complain.”

Listening to different groups react to the prolonged state of emergency in Turkey reveals a few common points. First, Erdogan is able to rule effectively because, even as opposition groups experience similar injustices, they remain deeply divided in Turkey — so much so that some cheered the arrests of Kar, as well as the arrests of fashion designer Barbaros Sansal and Al-Monitor columnist Kadri Gursel. It is almost impossible to find more than a few sober analysts in Turkey who would stand up for the rights of these three men simultaneously.

Second, rights come with strings attached in Turkey. Or, rather, they are privileges that can be revoked at the whim of the leader. The freedoms of expression, association and press are at the mercy of those who have political power. In a sense, those freedoms are not a right but a gift, and the government can decide when and how you can enjoy the gift and can take it away without warning.

Third, not all Islamists are equal in the eyes of the government. As with Kurds, the government believes there are good Islamists who applaud Erdogan and unruly ones who refuse to remain silent when confronted. The AKP's battle now is to control the latter so they do not influence the others before the April 16 referendum.