Hayat Tahrir al-Sham in Idlib has recently arrested several members of Hizb ut-Tahrir, in what the group says is a crackdown against those criticizing HTS’ position on the Turkish plan to normalize relations with the Assad government. 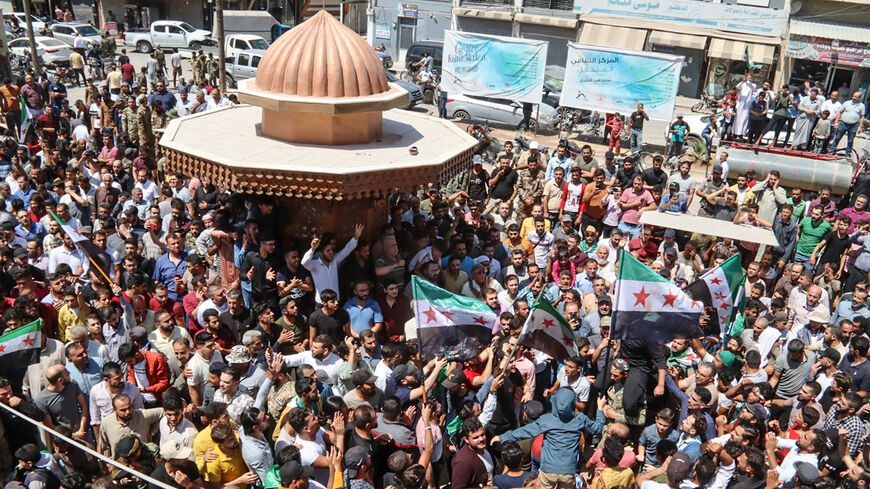 Syrians gather to protest against a proposal from the Turkish foreign minister for reconciliation between the Syrian government and the opposition, in the border town of Azaz in the rebel-held north of Aleppo province, Syria, Aug. 12, 2022. - -/AFP via Getty Images

ALEPPO, Syria — In the first week of September, the town of Atarib in the western Aleppo countryside and the camps for the internally displaced in northern Idlib witnessed large-scale protests staged by Hizb ut-Tahrir (Syria branch), a jihadist party, against Hayat Tahrir al-Sham (HTS), which controls large parts of Idlib province in northwestern Syria.

The protests were triggered by HTS’ arrest of prominent officials from Hizb ut-Tahrir, including media office member Nasser Abdel-Hay.

Mostafa al-Qasr, a prominent member of Hizb ut-Tahrir who resides in Atarib, told Al-Monitor, “HTS’ security apparatus arrested Sept. 1 a member of the party’s media office, Nasser Abdel-Hay, in front of his house in Atarib. [Before his arrest], Abdel-Hay had made public statements attacking the Turkish foreign minister’s call on the Syrian opposition to reconcile with Bashar al-Assad's regime. He had also criticized the Turkish regime's [normalization] stance toward the regime.”

Protests against HTS in the town of Atarib erupted on the evening of Sept. 1, as dozens of Hizb ut-Tahrir supporters rallied in front of HTS’ police station in the center of the town. They demanded the release of their detained party members, including Abdel-Hay.

The next day, protesters opposing HTS swarmed the streets, coming out of large mosques in the town calling for liberating Atarib and ousting HTS. After the Friday prayer Sept. 2, clashes broke out between Hizb ut-Tahrir supporters and HTS followers at the Great Mosque in the town.

In this vein, Qasr said, “The protests continued for several days in Atarib. Other groups affiliated with Hizb ut-Tahrir in the northern countryside of Idlib joined them. Some protesters posted videos demanding HTS to yield to their demands.”

He noted, “On Sept. 6, HTS released Abdel-Hay but refused to free another detainee, Ibrahim Haj Ali, nicknamed Abu Dujana, who was arrested because of his criticism of HTS in a post on social media.”

A security official from HTS based in Idlib told Al-Monitor on condition of anonymity, “Hizb ut-Tahrir is trying to sow chaos in the liberated areas. They are attacking the jihadis in Idlib through the slogans they are raising during their protests, and accusing them [the jihadis] of collaboration [spying for Turkey].”

The official added, “In the past weeks, some members of Hizb ut-Tahrir stirred up chaos and sedition in some mosques in the city of Atarib and elsewhere in Idlib, which is why [HTS] arrested some of these people.”

Hizb ut-Tahrir has been the most vocal in the past weeks against the Turkish rapprochement with the Syrian government and the statements made by Turkish Foreign Minister Mevlut Cavusoglu in August about the need to achieve reconciliation between the opposition and the government in Syria.

Supporters of Hizb ut-Tahrir organized several sit-ins and protests denouncing the Turkish position and Cavusoglu’s statements, as they believe that the Turkish government is conspiring against them and seeking to bring the Syrian revolutionaries back under the government’s control.

They also condemned the position of the Turkish-backed Free Syrian Army (FSA) factions along with HTS, which they accuse of supporting the Turkish decision, describing them as mere tools with no decision-making power.

Meanwhile, women affiliated with the party also participated in a number of protests against the shift in Turkey’s policy.

Hizb ut-Tahrir’s media office conducted a street poll in Idlib countryside, where most of those interviewed criticized Turkey’s plan to normalize relations with the Syrian government.

The party also organized a series of political seminars in Idlib countryside, warning of the next stage in light of the change in the Turkish position.

Ahmed Abdel Wahab, head of the media office of Hizb ut-Tahrir (Syria branch), who resides in Idlib, told Al-Monitor, “There are several reasons behind the arrest of the party’s members. Some of these arrests were carried out upon the instructions of the intelligence services of countries that support the [opposition] factions. Others were arrested for exposing the work of these factions. The factions are driving the Syrian revolution to the edge of demise. They kidnap and torture any dissidents and believe the residents of the so-called liberated areas are their slaves and they may act in these areas as they please, without supervision or accountability.”

Abdel Wahab argued that Hizb ut-Tahrir members were arrested against the backdrop of the party’s position denouncing the Turkish relationship with the Assad government and the alleged reconciliation with it.

He noted that the recent arrests are not due only to the party’s stance on the recent Turkish statements in favor of reconciliation, but also to previous positions of the Turkish government as a whole, including Turkey’s handover of Lt. Col. Hussein Harmoush, who had defected from the Syrian army at the beginning of the war, to the government in 2011.

“This is happening on both sides of the liberated areas — whether the areas controlled by the FSA or those under HTS’ control — since they follow the same authority and espouse the same policy toward Hizb ut-Tahrir,” he said.

Abdel Wahab explained, “The Turkish statements regarding relations with the Assad regime are part of the Turkish government’s plan to repatriate the Syrian refugees [to the areas] under the regime’s control, where they would face death — all under the pretext of a political solution, an agreement, an understanding or a settlement.”

He noted, “The position of Hizb ut-Tahrir on the Turkish role has been clear since the beginning of the revolution in 2011, when Lt. Col. Hussein Harmoush was handed over to the Syrian intelligence. The role played by Turkey is very dangerous to the revolution since Turkey has disguised itself as a [savior] and was able to fool many people.”

He added, “Hizb ut-Tahrir is a political party that practices all political activities that help it in its intellectual struggle against every thought that contradicts Islam, and in its political struggle against the regimes that are the puppets of the West. These activities include seminars, protests, speeches, distribution of leaflets and political campaigns, and so on.”

Abdel Wahab further stressed that the party believes the factional ecosystem that governs the opposition areas is an authoritarian regime that has accepted to become a tool in the hands of the so-called supporting countries. “The factions practice the policies of these countries, most notably the policy aimed to break the will of the people of Syria by threatening their source of livelihood and imposing taxes, not to mention the policy of repression and gagging,” he concluded.